So You Want to Start Watching Pre Code Films... 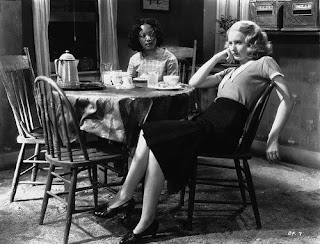 From shortly after the addition of sound to motion pictures until the middle of 1934, Hollywood ignored the production code. The code placed severe limitations on what films could and could not show. Sex, nudity, or immorality or crime going unpunished? Not under the watch of Hollywood's the Hays Office. Simply put rigid censorship was enforced.

Prior to this enforcement of the code there was thus a short Golden Age of uninhabited films now called pre codes. Viewers of today may be drawn to pre code films out of curiosity and titillation. But they'll stay for the quality of the films. It was a damn sight easier to make a good movie without a raft restrictions on the types of stories you could tell.

More and more of these movies are becoming available on DVD. Turner Classic Movies is releasing its third set of pre code films later this month and Universal is getting in to the act as well with a set to be issued in April.

There are a few excellent books on pre code films, none better than San Francisco Chronicle film critic Mick LaSalle's Complicated Women: Sex and Power in Pre Code Hollywood. If you don't have either the time or money to invest in a book you can always get a primer from Wikipedia.

But the best part of learning about pre code is by watching the films. Here is a modest list of ten to get you started. There are many, many others that did not make the list simply because they are not yet available on DVD. Lots of these are shown on Turner Classic Movies. The following are available now or will be part of the forthcoming TCM release.

Baby Face (1933). What could be better than watching Barbara Stanwyck sleep her way to the top? Even by today's standards Baby Face would be a shocker. We meet Stanwyck living at home with dear old dad. He's her pimp. This arrangement doesn't suit her and she leaves for the big city. Using her sexual charms Stanwyck seduces man after man on progressively higher rungs of the corporate ladder until she's on top of the world, pa. Baby Face is the quintessential pre code film and its terrific fare by any standard. Get to this classic sooner rather than later.

Wild Boys of the Road (1933). Coming soon to DVD (unless you're reading this after March 24 in which case it's available now). One of the things they did particularly well in the pre code days was produce powerful social commentary. This William Wellman film is a prime example. It's Depression-ravaged America and some youngsters have left the squalid poverty of home to try their luck on the road. All is not peaches and cream. Wild Boys is a film of gritty reality and provides a vivid look back at the early 1930's.

All Quiet on the Western Front (1930). It wasn't just about sex in the pre code era. War pictures were far more realistic. Almost 80 years later this is still one of the great war films ever made. It is an unflinching cinematic version of Erich Maria Remarque's fantastic book. War is not glorified but shown as the terrifying slaughter it really is. Nothing sentimental here.

Night Nurse (1931). If you are at all like me and love Stanwyck and Joan Blondell this is not to be missed. They spend a lot of time undressing (no, actually nudity mind you, but sexy). However Night Nurse is not about sex. This is an entertaining crime drama with Stanwyck in the title role. A menacing young Clark Gable (sans mustache) plays a sinister chauffeur. Another from the great director William Wellman.

Midnight Mary (1933). Loretta Young grew to be lovely woman and fine actress appearing in such films as the Bishop's Wife (1947) and Farmer's Daughter (1947) (for which she won an Oscar) in her 30's then was merely a handsome middle aged woman while hosting her own show in the 50's. But in her late teens she was a real dish. She practically steals Platinum Blonde (1931) from Jean Harlow. Is heart-breaking in Born to Be Bad (1934), enriches Heroes For Sale (1933) is a fit companion for James Cagney in Taxi! (1932) and is a triumph in Employee's Entrance (1933). All of these films are from the Pre Code era and all were made when Ms. Young was between 18-21. I selected Midnight Mary because I think it is was her ultimate star vehicle. We start with her character on trial for murder and follow the Dickensian story that got her there. Franchot Tone and Ricardo Cortez co star and Wellman -- who else? -- directed.

Red-Headed Woman (1932). Jean Harlow with an edge. She is oh so sexy, oh so bad. She doesn't hesitate to wile a man with her charms, even a married one. Harlow and the pre code era went together like hand and glove and this is perhaps the ultimate expression of that marriage. The wonderful cast includes Charles Boyer, Lewis Stone and Chester Morris. None a match for Harlow. Was any man?

The Animal Kingdom (1932). Never heard of it? How's this, Myrna Loy, Leslie Howard and the vastly underrated Ann Harding. A very pre code menage a trois is the centerpiece of the story. The first time I saw it I found it disconcerting to see my beloved Myrna playing an unsympathetic character. You'll get over it like I did an enjoy her cold hearted performance. The movie is about much more than a failing marriage as Howard's character struggles with questions of art versus dollar signs.

I Am a Fugitive From a Chain Gang (1932). A story ripped from the day's headlines. The amazing and true tale of an out-of-work, out-of-luck gent wrongfully jailed in a Southern state and put to work on a chain gang. Paul Muni, who had a tendency to devour the scenery, was perfect in the lead role. So good it was banned in Georgia. Mervin LeRoy directed.

Gold Diggers of 1933 (1933). The pre code era does a musical! (You could also go with 42nd Street (1933) or Footlight Parade (1933)). The original and far and away the best of the Gold Diggers films is also directed by LeRoy and has one of the better casts you'll ever come across. Ginger Rogers, Dick Powell, Ruby Keeler, Warren William, Guy Kibbee, Ned Sparks, Aline MacMahon and Joan Blondell (Sigh!). Comedy, musical numbers and some strong commentary on the Depression. If you haven't seen it yet, waste no more time.

Blonde Venus (1932). The best of the Marlene Dietrich and Joseph von Sternberg collaborations. You could also go with Morocco (1930), the Blue Angel (1930) or Shanghai Express (1932) (If it ever appears on DVD). Dietrich's character of Helen Farraday is a devoted wife (to Herbert Marshall) and mother (to the ridiculously cute Dickie Moore). When illness strikes hubby she returns to her cabaret act. Marlene’s performance in a gorilla suit is one of filmdom's great moments. She also takes on a lover, played by Cary Grant, and eventually goes on the road with spouse in pursuit. Amazing, entertaining stuff the likes of which would not be seen for the 33 years of code enforcement.

You should definitely have part 2! Although I love every film you mentioned-- sooo excited about the Wellman releases coming up this month! It's about time. Heroes for Sale is another one in the new Pre-Code package, and one of my all time favorites.

Riku, a very articulate and amusingly written post. I'm ashamed to note how many of these I haven't yet seen. Mick LaSalle's "Complicated Women" is a good recommendation. The TCM special (narrated by Jane Fonda) is well worth watching, and contains clips from several of the movies you discuss. I've just gotten the book's companion, "Dangerous Men," and am looking forward to starting it.

I was all set to add "The Animal Kingdom" to the list, and there it was already! Of the ones I've seen, it holds up better than nearly any of them. It's based on a play by Philip Barry, who also wrote the Katharine Hepburn vehicles "Holiday," "The Philadelphia Story," and "Without Love." "Holiday" was actually filmed once before in 1930, with Ann Harding playing the Hepburn role (and she received as Oscar nomination for it). The thematic resemblances between it and "The Animal Kingdom" are clear. In a newspaper piece not too long ago, LaSalle said that of all the pre-code actresses, he thought Harding was the most gifted (probably not counting his beloved Shearer!).

All in all, a really informative and nicely written post.