No Escaping Politics, Not Even in a Classic Western 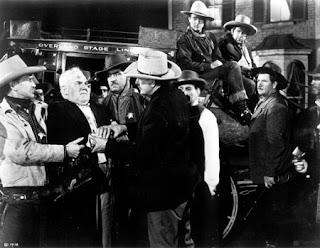 There is no escaping conservative gasbags railing about government meddling and high taxes.

I thought I was safe watching a John Ford film today. Safe from crybaby Republicans yammering about government regulations while secretly picking our pockets. No such luck.

Stagecoach (1939) is the story of nine very disparate characters riding on a stagecoach into the teeth of Geronimo's war party. You've got such characters as Dallas (Claire Trevor) the shamed prostitute booted out of town. Doc Boone (Thomas Mitchell) the shamed town drunk similarly asked to hit the road. The Ringo Kid (John Wayne) a fugitive from justice. Hatfield (John Carradine) the gentleman gambler. Samuel Peacock (Donald Meek) the mild mannered whiskey salesman returning to his family. And then there's Henry Gatewood (Berton Churchill) the bank president absconding with the payroll. If you guessed that the crooked businessman is our blustering reactionary, you win the Kewpie doll. (He's pictured above getting busted.)

My oh, oh my you should hear this self righteous, bloviating pompous swindler go on. He complains about taxes. He complains about government regulations. He insists on this and demands that. He looks down on drunks, whores, Indians and Mexicans and anyone else not up to his lofty standards. All the while there's a bag full of ill-gotten loot sitting on his lap. Here are his own words:

I don't know what the government is coming to. Instead of protecting businessmen, it pokes its nose into business! Why, they're even talking now about having *bank* examiners. As if we bankers don't know how to run our own banks! Why, at home I have a letter from a popinjay official saying they were going to inspect my books. I have a slogan that should be blazoned on every newspaper in this country: America for the Americans! The government must not interfere with business! Reduce taxes! Our national debt is something shocking. Over one billion dollars a year! What this country needs is a businessman for president!

Director John Ford was known as a bit of a conservative himself but at a time when the right wing, as dead wrong as they were, gave respectable arguments for their positions not laced in hyperbole and hypocrisy. Ford's films often had corrupt characters such as Gatewood who got their comeuppance. Indeed the FDR years were not only unkind to practitioners of rapacious capitalistic practices, the films of those years also made their ample girths a target. (Looks like I've set myself up for a future post, movies versus the super rich in the FDR years...coming soon?)

Despite the reminder of the government-loathing right wingers, I thoroughly enjoyed today's viewing of Stagecoach, one of my all-time favorites films.

Ford's camera work during the indoor scenes is particularly noteworthy, especially how he contrasts those cramped scenes with the wide open paces of Monument Valley. The cast is exceptional, especially Mitchell and Trevor though I think George Bancroft as the Marshall gives an underrated performance. He is the strong center of the nine travelers. Not stained by scandal, not weak, not quirky. A man determined to do what's right, even if it means stretching the law. He's essential to the success of the film and Bancroft couldn't be better.

Look here, if you've never seen Stagecoach, you've got an assignment for the weekend. if you've enjoyed it, re-visit this extraordinary film. Just beware you may be reminded of those noxious conservative blowhards.
Posted by Richard Hourula at 10:20 PM

Riku, in my opinion "Stagecoach" is the greatest Western ever. With its journey motif and its array of characters who are recognizable types without being cliches, it transcends the genre. And how refreshing to see John Wayne give such a likable and fresh performance, before his screen persona became so set. You rightly praise its visual qualities, particularly the contrast between indoors/inside the stagecoach scenes and the outdoor scenes in those incomparable landscapes. Ford even treats the Native Americans with respect--fear, yes, but above all respect--something rare for the time and for a long time afterward. And what a hypocritical blowhard that renegade banker is! When I last watched the movie, I couldn't believe how contemporary his rant sounded, almost word-for-word like the things you read in conservative newspaper columns, or did until very recently. For me Ford's sentimental streak and his cornball idea of comedy relief often compromise his movies, but not in this one. Just a great and timeless film.