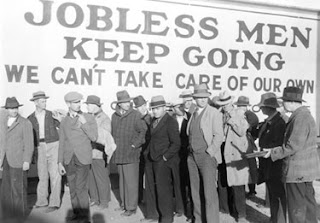 A few days ago I listed ten wonderful films from the pre code era. A brief explanation and introduction of what I was going on about was provided and this sentence is linked to that intro. Suffice it to say that the list of ten wasn't near enough. So here is another ten (wouldn't be funny if I had a list of nine or eleven?). If someone wanted to make a case that this list is better than the first one they wouldn't get much of an argument from me. Anyhoo with the first ten I was looking for a representative selection and I'm trying to do the same again. All 20 films are guaranteed to be great examples of cinema from any era. 'Nuff said, here's another half score.

Heroes for Sale (1933). Finally coming to DVD next week as part of TCM's third set of pre codes. It works on numerous levels but most of all tis a great Depression era social drama. Its about war heroes, both the real ones and the phony baloney kind. It's about labor struggles its...Oh it's no good to try to capsulize it in so short a space; there's so much that Heroes (pictured above) has to say. Director William Wellman made a slew of great films during the pre code era alone. He had a knack for telling stories by creating worlds that were so real you couldn't help but react viscerally. Heroes is totally unsentimental and compelling in the way of many pre code dramas. Not to be missed.

Three On A Match (1932). How's this for starters: the three on the match are Bette Davis, Joan Blondell and Ann Dvorak. Did someone just say 'who's Ann Dvorak?' The lovely Ms. Dvorak is one of those all too forgotten gems of bygone days. She's not just a pretty face. Ms. Dvorak exudes vulnerability and strength of character. The kind of dame men fall for all these years later, even if there’s an even prettier one in the room. When you've got the incomparable Bette Davis and the utterly delightful Joan Blondell rounding out the cast...Pure quality. Mervin LeRoy, a pretty fair director himself, brought to screen this story of three young women who were girlhood friends catching up on old times. We get to follow their new times which are wildly divergent. There's redemption, tragedy and heroism. All of it packed into a very pre code running time of 63 minutes. Zowie!

The Divorcee (1930). Let this be a lesson to anyone interested in marrying Norma Shearer: she don't put up with no mess. Naughty Norma seeks revenge on her adulterous husband with a fling or two of her own. This is the kind of stuff Hollywood shied away from once the production code was enforced. Sure its about sex, but its more about a woman with her own mind and own body who'll do as she pleases, thank you very much. The pre code era gave actresses like Shearer great roles, this is the perfect example.

The Public Enemy (1931). They made some terrific gangster films during the pre code era, none better than this classic starring James Cagney. I could go on and on about Public Enemy but I already did. Read an earlier post that this sentence is linked to. Come on, read it....

Trouble in Paradise (1932). Herbert Marshall and Miriam Hopkins formed a great duo of roguish thieves in this Ernst Lubitsch film. Indeed to me this is Marshall's signature role. He's letter perfect as the high class jewel thief plying his trade in European capitals. Has he met his match in the lovely Ms. Hopkins? What fun they had! And what fun for audiences! And in pre code days there was none of this film noir crap about crime never paying.

Morocco (1930). Marlene Dietrich is obsessed with Gary Cooper. Can you imagine her not getting her man? Joseph von sternberg directed Morocco in one of his many parings with Marlene. What a team they made! He had "a thing for her" (keep it clean) and it resulted in camera shots that veritably caressed the star. You loved Marlene doing a cabaret act in a gorilla suit in Blonde Venus and you'll dig in her tux too. The on screen romance between Dietrich and French legionnaire Cooper is a sight.

Footlight Parade (1933). As great as Cagney was playing gangsters he was equally good doing some song and dance. Problem was he rarely got the chance. See him here with frequent co-star Joan Blondell (goodness she was in a lot of terrific films in those days). See also the delightful pairing of Dick Powell and Ruby Keeler along with beloved character actors Guy Kibbee and Frank McHugh. Sub plots aplenty but most off all some fine patter and toe tapping numbers. The incomparable Busby Berkeley staged the extravaganzas.

Employee's Entrance (1933). You can't have enough of the youthful Loretta Young on any list. Here she is a salesgirl seduced by a tyrannical boss (Warren William, who was made for the role). While she carries on with the head honcho she also falls for someone closer to own age and station in life played by Wallace Ford (what a fine and interesting career he had). Roy Del Ruth directed.

Waterloo Bridge (1931). For God's sakes make sure you're seeing this the original and not the poxy 1940 version with Vivian Leigh and Robert Taylor. James Whale directed and Mae Clarke stars. Ms. Clarke gives a heartbreaking performance as a chorus girl in London during World War I who's forced to turn to another "older profession". She falls for a solider and there's a sense of tragic inevitability to the ensuing romance. Whale's direction is top drawer. Such stories were not told so honestly in the intervening years as the sappy watered down remake proves.

Five Star Final (1931). This is an all time favorite of mine. Mervin LeRoy directed this powerful look at the sensationalistic press. Edward G. Robinson is the editor who comes to understand the direct human cost of sleazy journalism. Boris Karloff is creepy, but this time as a reporter who'll go to any lengths to get a story. The film is relevant today although an exploitative media is more in evidence through TV and the internet. More on this film in a forthcoming post on movies and the newspapers.

The more alert of you will notice that the two films on this list (Five Star Final and Employee's entrance) have not yet been released on DVD. Someone needs to get with the program.

Posted by Richard Hourula at 6:21 PM

Another great list-- I haven't seen the last two in the list yet, but I can't wait to! I hope TCM plays them soon.

I haven't read either of Mick LaSalle's books, but I just finished Pre-Code Hollywood by Thomas Doherty, and that was a pretty swell read, too.

Riku, I just started Mick LaSalle's "Dangerous Men," and so far my impression is that it's even better written than "Complicated Women." In about a week TCM is showing several William Wellman pre-codes, including three on your lists--"Wild Boys of the Road," "Midnight Mary," and "Heroes for Sale"--as well as the Richard Schickel documentary on Wellman. After reading your posts, I for one am certainly looking forward to them.

An afterthought: The pre-code I most want to see is "Torch Singer" (1933) with Claudette Colbert, one of my favorites of the studio era. Mick LaSalle describes this movie in "Complicated Women" in such a way that it sounds fascinating. And he says Colbert has never been better, even in "It Happened One Night." I don't believe it's available on DVD or even VHS. I've requested TCM to show it. Maybe others could too.