Margaret Dumont and Joe Pesci Would Make Such a Cute Couple 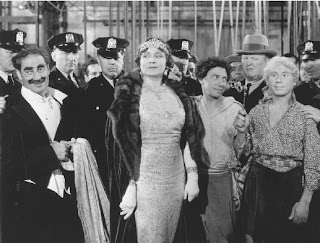 First of all take a big sip of water and don't swallow. Ready?

I was watching A Night at the Opera (1935) on TCM Saturday and got to thinking about how similar it is to Goodfellas (1990).

Those of you who haven't already concluded that I'm round the bend may now join the rest of the universe in assuming that all's not well in Riku's gray matter. The Marx Brother and the mob? Rufus T. Firefly and Paul Cicero? Thirties comedy and Nineties gangster?

It's all in the anarchy, folks. Groucho, Chico and Harpo don't play by the rules. Laws, conventions, social norms mean nothing to them. If it felt good, they did it. Especially if it got a laugh. For Henry Hill, Jimmy Conway, Tommy DeVito and the rest of the "gang' in Goodfellas, laws and rules are at most a minor inconvenience. Certainly nothing to get in the way of a few dollars or a good time.

To the brothers Marx and the fellas good, society was something to take advantage of not aspire to. No traipsing carefully around civilized, cultured types, they are squares who don't know from fun. As for cops and dowagers, they were foils. In fact anyone who presumed to authority or respectability was subject to a good smack or a clever jibe.

One of the great appeals of both the Marx Brothers in particular and the gangster genre in general is the vicarious thrill derived from watching people do whatever the hell they want to do -- and for the most part getting away with it. Of course someone walking into a cafe and spitting on the floor would neither be entertaining nor interesting. But pulling of a heist or cracking wise at the expense of a society dame...as the song goes..that's entertainment!

Movies are, after all, an ideal form of escape. There's nothing like living out the fantasy of doing what you want on your own terms be it killing em with laughter or a gat. Harpo bounds around wordlessly creating havoc and chasing women -- literally-- just as we might like to do. Meanwhile Jimmy Conway takes what he wants, when he wants, but always as a gentleman, leaving cash with the hijacked truck drivers. With laughs or panache, its all done outside regulations.

The rest of us our confined by society's conventions. Sure, we may cheat a little here, or take a bit extra there, or ignore section something code something else. But we do it behind close doors and maybe even a little guiltily.

The Marx Brothers and the gangsters of Goodfellas are also honest. They don't pretend to be respectable like we do. There are no false fronts in the way they live their lives, actually live them. How gleefully audiences applaud those who are true to their spirit, living life on their own terms. how jealous we are of them.

Not our cinematic friends. They've the cajones to do in front of god and everyone else.

Nice! Two of my all time favourite!
Pesci and Dumont... ahahaha