In a Class of Its Own 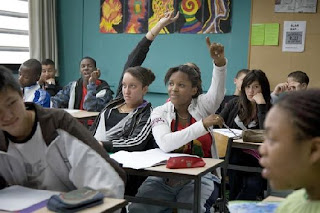 Today I went to a movie theater and saw my story told...in French. The film was Entre les murs, it's called The Class in English markets. By any name it was France's offical submission as best foreign film at the most recent Academy Awards and it was the first French film to win the Palme d'Or at the Cannes Film Festival since 1987 and it was a unanimous choice.

It's the best film about teaching I've seen. Ever.

The story centers around a school year in the classroom of a French teacher in a quite racially diverse Paris school. The students are 14 and 15 year olds. Like just about every other age group between 0 and 18 it can be safely classified as "difficult."

I spent about twenty years teaching History to racially diverse classrooms' full of students only a year or so younger than the ones in the film.

France, California, same issues, same attitude, same problems, same challenges, same triumphs, the same conviction that this year or this day or this student can be different. Because you know what? Sometimes it can be different. Sometimes the teaching process works. Sometimes there's a breakthrough, an understanding. It doesn't happen often enough but when it does -- what a great feeling.

As audiences learn from watching Entre les murs, it's a two-way street. Teachers don't have a monopoly on the answers – or even on good behavior. Teacher, student, parent, we can all be real schmucks at times. Watch the teacher, played by François Bégaudeau, upon whose book the film is based, go just a bit too far with the sarcasm while engaging in the same sort of put downs at which his students are so adept. (Been there, done that.) Watch him lose it and cause actual insult. (Been there, too, regrettably). Watch the students pounce on any misstep by an adult. They don't miss a thing. Whether it's a perceived case of inequity, a shoelace undone or a mispronunciation, students will catch it and hold tight. They'll take an adult's error in their teeth and shake it like a dog with a bone. They'll gnaw at you.

But as we learn in Entre les murs there's a reason, if not a method, to this particular madness. Look how students are so often boxed into corners -- or at least feel that way. They're stuck in a place they don't want any part of, learning things of little or no interest or seeming relevance. They have to follow rules they had no role in creating. Add to this that they often come from homes that can be anything from unpleasant to ghastly.

Meanwhile, teachers are underpaid, overworked and unappreciated. They conjure imaginative lessons that fall flat in the face of bored, chatty or insolent students. The frustration mounts on both sides and the results can be unpleasant.

But good teachers know that the most important thing they can do is show up. Good students do the same and though there is the constant push and shove there is also compromise and small victories, some merely moral, celebrated by both sides.

It's the system, I tell ya. Education in western culture doesn't work. For gifted students it's fine. For average students it's a tough slog. For many from outside the European culture, like African Americans or African French, it can be a disaster waiting to happen and the waiting isn't all that long. All the education reform in the world won't help. A revolution is in order.

This is abundantly clear from my experiences and those of our teacher in Entre les murs.

There is no heroic breakthrough. No miracles. That's the stuff of Hollywood-style teacher films. But there is the daily grind in all its agony and ecstasy. There is progress and regression in equal parts but, by God, there is effort. This is not a depressing film. It's real, it's honest and it's totally compelling. Yes, I enjoyed it largely because I could relate to virtually every second. But the missus, who was with me, enjoyed it, too and so have audiences all over. This is something great cinema can do: take the mundane, even slightly unpleasant, and make great storytelling out of it.

I reiterate, the best film about teaching I've seen. Ever.
Posted by Richard Hourula at 7:27 PM