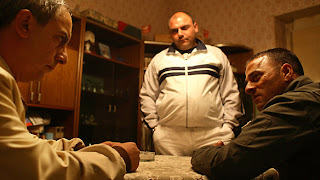 In the introduction to his new book, "Have You Seen...?" film critic and historian David Thomson says of praising beloved movies: "There is a monotony to writing or reading about just the splendid....Enthusiasm is too easy and can lead to lazy writing formulaic writing."

That being fresh in my mind it makes it all the more difficult to write about the film I saw yesterday, Gomorra. All manner of glowing adjectives apply to this recent import from Italy. So I'll have to do without such well worn encomiums as "powerful, tour de force, brilliant, stunning, wonderful, unforgettable," to name but a few. Hmm, this won't be easy.

Gomorra, which won the Grand Prix at the Cannes Film Festival last year, is a stark look at the Camorra, the Neapolitan version of the Mafia. (I doubt that the two names rhyming is mere coincidence.) They use their vast criminal enterprises such as drug trafficking and toxic waste disposal to fund legitimate business ventures. Both their annual revenue and number of homicides committed are astronomical. Robert Saviano wrote the 2006 book Gomorra upon which the movie is based (he co-wrote the screenplay) and is consequently now living undercover under 24 hour protection. Clearly the Camorra are very much a going concern and a lethal one at that.

The film follows five separate strands all concerning individuals within the Camorra -- from the young to the old -- who reckon they can go their own way within the crime syndicate. None really succeed (is there any form of success attendant to such a life?) but neither do all suffer death.

The violence in Gomorra is not stylized. There is not slow motion, there is no accompanying rock music. Indeed you feel at times you are watching a documentary. Characters are not colorful or engaging. There's virtually no one to root for. Director Matteo Garrone eschews such devices, instead giving us a realistic look at an ugly, depressing world. Hardly sounds like entertaining stuff but it Gomorra is utterly compelling from start to finish. There is nothing gratuitous in the movie. There is no affect to any of the performances. Indeed, the word performance seems an odd way to describe the manner in which the actors go about the business of playing their roles.

Sometimes a movie succeeds because of the style and world it creates. Gomorra is more a re-creation of a world that already exists. ( One that we'd like to wish away.) As such it makes Slumdog Millionaire look like High School Musical.

The Godfather, Goodfellas, The Sopranos all speak different sort of truths about organized crime. Perhaps they are guilty (quite by accident) of glamorizing the Mafia. Gomorra -- no better or worse a depiction than these three, merely different -- makes it look the ugly, brutal business it really is. As there is more than one way to skin a cat (not that I know of any) there are innumerable ways to reveal the reality behind the mob.

One of the countless signs of the Oscars irrelevance in actually selecting the best films and performances of the year is the fact that Gomorra, to the astonishment of many, didn't receive a Best Foreign Film nomination.

If you're lucky enough to be living in an area where Gomorra plays, go see it. Otherwise dutifully wait for its DVD release and rent it right away. You'll be glad you did.
Posted by Richard Hourula at 12:26 PM