Did Anyone Bother to Ask Lee Harvey What He Thought of the Movie? 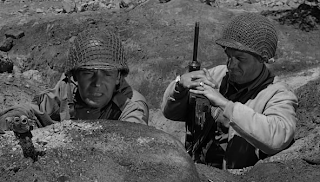 Those of us who are students of the Kennedy assassination know the answer to this bit of historical trivia: What movie was playing when alleged JFK assassin Lee Harvey Oswald was arrested on November 22, 1963 in the Texas Theater?

Much as Manhattan Melodrama (1934) is principally known as the film John Dillinger had just seen when he was shot outside of a movie theater in Chicago. Hell is for Heroes is similarly more famous for who saw it then what they saw. Tis a shame, that.

I watched it via TCM Saturday. Ben Mankiewicz introduced the film. Having Mankiewicz as your host instead of Robert Osborne is like having Babe Ruth's backup start ahead of the Bambino. He may be good, but he's not "the man." Once you get over the fact that you're dealing with the second string you appreciate that the Manc (he needs a nickname) knows his way around a film intro too. Saturday he informed viewers that Hell is for Heroes was quite graphic. I hope he added, for its time (sorry, don't recall). If he did he was spot on.

The man behind the camera was Don Siegal who was prolific as a TV director but was also responsible for the original Invasion of the Body Snatchers (1956) and Dirty Harry (1971).

The cast is fascinating. First off you've got one of my childhood heroes, Steve McQueen. He sports a wisp of a beard (recalling Vic Morrow in the TV series Combat) and attitude appropriate to the film's title. He's all surly gumption and stoic anger. Then there's pop singer Bobby Darin whose premature death not only cost the world some nice music but some nice film performances as well. (It also contributed to Kevin Spacey's bizarre obsession with the man, but that's a story for another time and another blogger.) I've not seen much of Darin the actor but he more than held his own in this film.

So you've got an acting icon-to-be and pop singer. Say, was there a comic in the cast? Funny you should ask. No less a personage than Bob Newhart, who was just becoming, "big." They even stuck a telephone bit for Newhart to do in the film. Because audiences then and now are quite familiar with Newhart's phone gags, it sticks out like the proverbial sore thumb thus distracting from the movie. Otherwise Newhart is just dandy in the film.

Who else? Why none other than Fess Parker, TV's Davy Crockett. What an odd duck. Parker was the poor man's Gary Cooper. Make that the destitute man's Cooper. His delivery was so flat you can barely tell he had a pulse. Cross him with Rip Taylor on coke and you'd have a normal human being. I'm not sure what Parker's appeal to audiences was but I'd have cast him as a dead guy in a heartbeat.

I know you're wondering if a bespectacled James Coburn is in the film and as a matter of fact he is. Coburn was incapable of a bad performance and he was a lot more versatile than people give him credit for. Coburn fans should check him out in this film.

I suppose the only thing missing from the cast was a troubled young man who was later to fall victim to the supposed Rebel Without a Cause curse. A guy who, you know, died of an overdose in suspicious circumstances at a young age that sort of thing, real rebellious type. Lo and behold who was that playing a Polish refugee who joins the squad? Yup, meet Nick Adams. His star did not burn quite brightly enough for most of you to have heard of him so you may have to look him up. Interesting chap who meet all the requisites aforementioned.

The movie itself (set in the European Theater, likely in the weeks following D-Day) has a well worn but well executed premise. A small squad of soldiers must valiantly hold off an enemy with vastly superior numbers. Equal portions of cunning, guile and bravery will be required. Internal conflicts arise among this melting pot of disparate characters. But the GIs pull together for the common good. There is the inevitable arrival of the "cavalry" but not soon enough to save all our heroes. Don't get too attached to any of the lads as a number "fall" in battle. One has a particularly grisly death and another a quite heroic one. Manc wasn't lying about the film's gritty realism. It's a splendid example of the beauty of black and white.

The closing shot has supposedly inspired a cult following and I can imagine far triter scenes to celebrate. It's powerful good stuff.

Manc tells us that McQueen did not get along with anyone on the set, most notably Darin. Us McQueen fans give him all the slack in the world. He may have been a pill on set but the on screen results were always good. He's part of the reason tht Hell is for Heroes is a helluva movie.

Wonder how Lee Harvey liked it.
Posted by Richard Hourula at 7:30 AM

Seriously, I LOVE the way you write!! I'm so thrilled I discovered your blog-- it's now my favorite one to read :)

"Having Mankiewicz as your host instead of Robert Osborne is like having Babe Ruth's backup start ahead of the Bambino. He may be good, but he's not "the man."

I missed this movie when it was on (darn!) now I'm going to have to peruse the TCM listings to see when I can catch it next time... I always wanted to see a film with a bespectacled James Coburn!