Movies I've Watched Lately, All of Them I Enjoyed Greatly 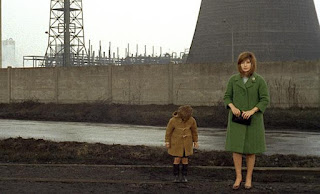 I recently had a week off and of course watched a passel of movies. What else does someone like me, especially when I am me, do with some time off at home? Here's capsulized comments (you don't want tablets, I'm sure). And by the way these were all favorites that I own on DVD so you know I'm just gonna say nice stuff. 'Nuff.

Red Desert (1964). Amazingly beautiful especially with Monica Vitti and that marvelous face. Deep lush colors. The environment as the story along with the emotionally fragile and even damaged Vitti character whose actions alternate between the willful and the randomly bizarre. Antonioni directed and this is one of his three masterpieces and you should know the other two (L'Elclisse (1962) and L'Avventura (1960)). Richard Harris is a co-star and he plays a guy who goes with Vitt's flow. So.

Band of Outsiders (1964). Go Godard go. Jean Luc the director of this peripatetic story of three young rebels without the slightest cause other than perhaps the art of being cool. See them plan and sort of pull of a heist, see them take in the Louvre in record time, see them and their mannered dance, see them skip out on English class. See them smoke and drive and play at being latter day Bonnie and Clydes. See a cold overcast Paris in March looking so chill. It's a thrill. 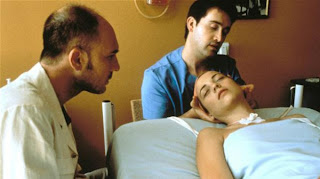 Habla Con Ella (2002). Almadavor directs some weird stuff as a gay male nurse falls in love with his beautiful young catatonic female patient. Why not? He befriends a journalist whose bull fighter lover also goes into a coma. Wow. Beautiful story to watch and ponder as a contemplation of how we obsess, love, become ourselves through others. A thoughtful film. A film in thought. Glad I bought.

The Great Dictator (1940). A historical document as an entertaining comedy as a lampooning of particular dictators and forms of government and repression and hate. Chaplin takes on Hitler. Does he overdo the message at the end? How can you when your message is peace, love and understanding in the face of totalitarianism. The little tramp's last turn. After it, Europe would burn.

Run Lola Run (1998). Franka Potente is frenetic as she runs, runs, runs. We see how  a simple movement, decision, action can change the course of a life and thus many lives and thus the world. Direction by Tom Tykwer -- well done as is the editing and I like the way the movie makes a broad point in a broad way and is so damn much fun and gives such a rich vein of thinking to think on. Watch Lola run. It's fun! 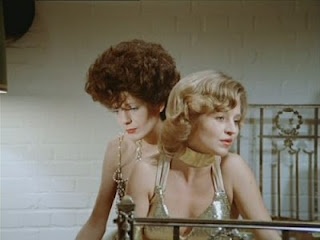 Manhattan (1979). Start with vistas and skylines in glorious black and white to the tune of Gershwin's Rhapsody in Blue. Perfect prelude to a perfect film. Angst never better. Woody wrote, directed and starred with Dane Keaton. But don't forget Michael Murphy so good as the philandering friend, or Mariel Hemingway the young lover. Funny, wise and poetic. Love and betrayal. Allen hit on the nail.

Ivan's Childhood (1962). Not such a great childhood for the little Russian boy. Serving the Soviet Army during WWII. Haunted by memories of the sad fates that befell his family. Soothed or tormented by happier memories of Mom and pre war days. Visually stunning film from Tarkovsky. His camera soars above, or looks up from below. The action is muted but emphasized in foretelling or aftermath by the exquisite camera work. Haunting tale. Leaves a mental trail.
Posted by Richard Hourula at 4:33 PM 1 comment: