I Love a Good Miracle, Don't You? 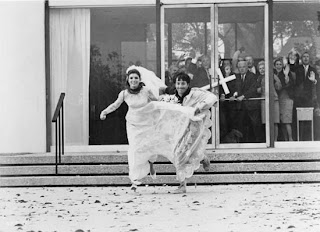 There's nothing like a good miracle to pick up your spirits. And no, I'm not referring to seeing the Virgin Mary in your mashed potatoes. I'm taking about genuine, real life events that defy explanation. While obviously possible, they are highly improbable.

The birth of my first child was a miracle. At the outset of the wife's pregnancy it was discovered that she had a fibrous tumor pressing against her uterus. The embryo was in jeopardy as was any hope of future children and indeed, though to a much lesser extent, my wife's health and well being.

The pregnancy was difficult, to put it quite mildly. As the baby grew so did the tumor. Finally the tumor burst, with no harm to mother or child. No more tumor. Baby was born a month early but otherwise was perfectly normal. I say it was a miracle because that's what the doctors called it.

I had an earlier encounter with a miracle and in the world of sports its quite well known. November 20, 1982, a college football game between two of the biggest rivals in sports. Cal vs. St*nford. The coveted St*nford Axe going to the winner.

It was a remarkable game even before the fantastic finish. Great plays, lead changes, excitement aplenty. Then a miraculous drive by the hated Cardinal was climaxed by a field goal with four seconds left that seems to clinch the victory for them. But the Bears took the kick off back for a touchdown courtesy of five laterals and a romp through the St*nford band which had mistakenly and stupidly taken the field.

"The Play" was positively surreal. I'd never seen the likes of it before. It was coming back from the lip of the rim of the edge of the precipice through means never before imagined.

Miracles are often be depicted in films as well. Sadly movie miracles generally seem silly, corny, contrived, unrealistic or all of the above. However, one time that it works on celluloid is in one of my favorite all time films, Mike Nichols' The Graduate (1967). *Spoiler Alert.*

Ben Braddock travels up and down the state of California to stop the wedding of this one true love, Elaine Robinson, and claim her for himself. Not the least of his problems is finding the wedding. Nearing the nuptials he runs out of gas and must run the rest of the way to the church. This will prove fateful. Ben arrives just after the I do's are exchanged. Too late. It's over. Nothing more to be done. But he does not yield!! Ben pounds on the windows of the church screaming, "Elaine!" repeatedly.

What's this? She responds to this beyond desperate plea? She runs to him. But Ben and Elaine must reckon with a church full of opposition. Miraculously they allude one and all, even locking their pursuers in the church with a cross. The film ends with them on a bus. Ben has succeeded, not in stopping the wedding, that battle is lost, but in winning the war. He has Elaine.

Under Nichols' direction and with the accompaniment of Simon & Garfunkel's music, this is a worthy and fitting finish to a terrific film.

Miracles do visit us. They are more products of perspiration then inspiration. And they can be a joy to behold. When they are successfully done in films as in The Graduate, well that's miraculous.
Posted by Richard Hourula at 7:06 PM