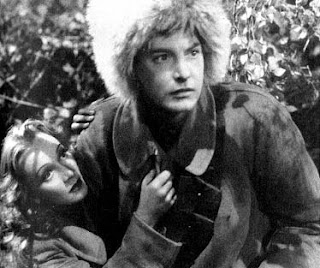 I love surprises. I got quite a surprise the other day when TCM offered its first ever showing of a film I'd not yet heard of, Knight Without Armor (1937). I saw that it starred Marlene Dietrich who has greatly enriched my fantasy life over the years (if only I could build a time machine I'd send myself back to the 1930's and...). That it co-starred Robert Donat, so wonderful in Hitchock's The 39 Steps, made it a must for the old DVR.

I didn't know what to expect. At this point in my life if I haven't heard of a film with such major stars in it I assume that it mustn't be very good. In this case I was very mistaken.

Donat plays a British journalist in pre Revolutionary Russia who, upon being booted out of the country for criticizing the Czarist regime, is recruited to stay and spy for his homeland. Meanwhile Dietrich is a very wealthy Countess who lives in luxury with a houseful of servants at her disposable.

Only a revolution could bring these two souls together and Mother Russia obliges. They fall madly in love. I'll dispense with further plot points, its best you discover it for yourself. If you missed it last week, fear not, you won’t have to wait three months or more to see it again. TCM will be re-airing next Monday at 1:00 am. Set your recording device now. (It’s not currently available in DVD.) Go on. Do it right away, you don't want to take a chance of forgetting. The rest of us will wait....

Knight without Armor is a Korda Brothers production and indeed TCM showed it as part of a tribute to the sibling film makers. The Hungarian born producers filmed this story of Russia in England with a German star and a French director born in Belgium, Jacques Feyder. The screenplay, based on James Hilton's novel, was adapted by American Frances Marion. How international can you get?

This melting pot of the movie had me wondering where it had been all my life. Unlike many other films set around the Russian Revolution it manages to be epic in scope without an epic length (just under an hour and three quarters).

One doesn't quite know what to rave about first. There is the lush cinematography of Harry Stradling Jr. who had a long and distinguished career; there is the wonderful score by Miklos Rosza for whom this was the first of nearly 100 films. And there is the brutal honesty of the story itself. White Russians executing Red Russians and Red Russians executing White Russians. By rifle and machine gun. It’s as violent a story you’ll see from the latter half of the Thirties. There is an alarming sense of arbitrariness coupled with an inevitable doom, that makes that violence all the more chilling.

I was struck by how realistic King Without Armor was. Yes you've got a fantastic love story with all manner of near miss high wire escapes and incredible fortune, but you've also got a vivid re-telling of the human toll and the unimaginable tragedy the Russian Revolution caused so many.

The train scenes alone have a documentary feel. The anxious waits at the trains stations, the crowding aboard trains. The desperation to get out, to anywhere. Then there are the on-the-spot trials many resulting in on-the-spot executions that are oh so chilling.

But the film’s most powerful scene is of the countess waking up in her mansion to find the servants gone. Every last one. Not a soul to wait on her hand and foot. There is the overwhelming sense that the world had been turned upside down (it had been) as she races around the empty rooms and out to the gardens finding no one. (The unexplained emptiness is eerie.) Finally she's confronted by an angry mob of revolutionaries seeking revenge on the aristocracy. It's an amazing scene and again the photography and score enhance it, but so does Feyer's composition of it.

And of course there is Dietrich's face. Feyer does not have the camera caress her in lingering close ups as von Sternberg so famously did, but he does have her framed perfectly in many shots. Using that lovely and evocative face to tell the story.

Dietrich is wonderful as the poor little rich girl, her very life capsized only to find an inner strength never before called upon. She also finds love in the arms of a stranger that helps her tap further reservoirs of bravery.

Donat here proves what a terrific star he could have been had not the terrible asthma that ultimately killed him much too soon limited the number of roles he could play. (Production of this film was slowed when he suffered a serious attack that sidelined him for a month). He is dashing and intelligent but shows enough fear to make his character seem all the more human and the story thus more real.

Together Dietrich and Donat are heroic because they betray vulnerabilities and doubt. They are not superheroes but two people facing an imaginable crisis using all the wits at their disposable.

What could have been, and indeed I feared, would be, a corny romance/adventure was a wonderful slice of history and touching love story.

What a great find this film was for me. I already cannot wait to watch it again to find more within it. And to think there is doubtless so much more out there to discover!
Posted by Richard Hourula at 5:19 PM

I recorded this last week, and I haven't watched it yet-- so I've bookmarked your post to come back when I've seen it :)

LOVE Robert Donat, so I record everything of his on TCM.. maybe I'll watch this one tonight!