It Takes All Kinds (Or So I've Been Told) 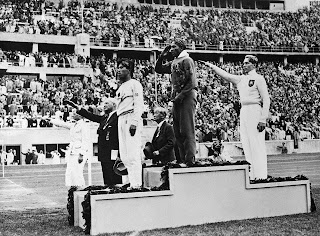 Growing up I always heard that "it takes all kinds." It was never clear to me just exactly why "all kinds" were in fact required. As I grew older I wondered just exactly why we couldn't get away without certain kinds, such as homicidal maniacs, serial rapists, child molesters and Ann Coulter.

I thus long ago concluded that, taken literally, the concept of having all kinds is undesirable.

I was reminded of this yesterday while riding the bus, a form of conveyance that indeed attracts all kinds. I was minding my own beeswax (which is my wont on buses) reading a book titled "Berlin Games: How the Nazis Stole the Olympic Dream" by Guy Walters about the 1936 Olympic Games in Nazi Germany. I've always been at once intrigued and repelled by the Third Reich. It is equal parts fascinating and horrid. Ultimately nothing good came from it save valuable lessons on the nature of evil.

The gentleman occupying the seat next to me asked what I was reading. I gave him as brief a summary as possible and returned to my reading hoping that what would do.

"Do you know who this is?" he asked showing me photo of man that had been printed from the Internet.

I answered honestly that he looked familiar but I couldn't quite place him.

Heidegger, he informed me adding that the German philosopher was an inspiration to Nazi thinkers.

"Doesn't look Aryan, does he?" my bus mate asked.

"No he doesn't" I allowed still unaware that he was building towards something.

Next he showed me a full page of mug shots showing various leaders of Nazi Germany, Hitler himself among them.

"Do any of them look Aryan?" he asked.

What a coincidence, I thought. Here I am reading about the Nazis and I randomly sit next to someone who has pictures of their leaders. Moreover these pics reveal that the hypocritical b*stards didn't even resemble the Aryan ideal they so extolled.

Then my new friend outed himself as a true loony. "They were all Zionists," he revealed.

Yes, I thought, that would explain their systematic annihilation of 6 million Jews, wouldn't it. (I even think like a smart ass.)

My actual verbal reply was something along the lines of "uhmpfhg."

Before I could form an actual coherent sentence like, "say buddy, ever consider making cyanide a daily part of your diet?" the whackjob showed me a picture of the White House with a Jewish menorah superimposed over it. "You know what this is?" he asked indicating the menorah. Before I could reply he said, with great satisfaction, "a menorah; everyone in the White House now is a Zionist. See, its what they do, they take over governments."

Ya know, the fact that you can photo shop an iconic Jewish image over a picture of the White House is not terribly convincing of anything other than computer skills.

I looked up and saw that we were approaching my stop. I thanked the heavens that this had been a particularly short ride.

"Yes, I do." I replied, meaning, of course, that as far as I was concerned what he was saying was that he himself is a certifiable kook trapped inside a normal looking body.

I knew better than to engage my Zionist-hating friend. People in his frame of mind have switched off the reasonable, rational portion of their brains. Any new information they receive is filtered through their rigid ideology (psychosis). Offering contradictions or alternative views to them are just like lobbing a softball. They'll swing from the heels and try to smash it back at ya.

My stop came and I veritably flew off the bus.

Our culture allows all kinds to speak out. Thankfully it allows us to tune them out if we so choose.
Posted by Richard Hourula at 11:07 AM

I know what you mean, though. I rang in the New Year forced to listen to some guy telling me that they needed more miniature golf courses in Las Vegas, how he could make a fortune betting on the Australian Open if he only had $10 grand to bet, and how he stood to inherit a ton of money someday. It was when he offhandedly mentioned that a relative of his built a rocket to specifically target alien spacecraft that I decided it was time to go...

On the other hand, if we didn't meet these types of people, life would be so boring!

Gee whiz, I really don't think I could have handled that as well as you! Who on earth carries around that propaganda for casual lectures on buses?

I don't think "it takes all kinds" - I think we're just stuck with all kinds.