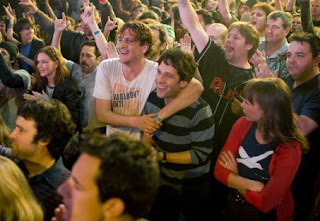 It's rare for an old curmudgeon like me to find anything positive to say about recent trends in American cinema but I've found one: male buddies, pals, friends, chums, bros, BFFs, partners, amigos, comrades, compatriots. By whatever name they're right up there on the big screen high fivin, goofin', laughin' and supporting one another. That is so totally awesome, man.

The prime example is a recent film (just out this weekend) that has its main theme that very notion of male friends. I Love You, Man is not just the latest but the best of the guy friend flicks.

The story centers around a charming young man, Peter Klaven, who has just gotten engaged. Problem is, he has no male friends. None. Nada. Zip. Zilch. Not even someone who could be the best man at his forthcoming nuptials.

Klaven is played by Paul Rudd. I'll say this about Rudd, I want to hang out with him. He often plays a best friend  simply because he's perfect for it. He's as likable a guy as you'll ever see and he plays one in the movies. As for I Love You, Man, long story short, and this is not a spoiler, he finds a best friend in the person of Sydney Fife (great last name) who is played by the also likable Jason Segal.

Their friendship is based on mutual interests, openness, support and the ability to have a great time together. Like the hokey pokey, that's what it's all about.

This is a great friendship because it comes at no one else's expense. They don't exploit women. They don't belittle other types of people, they stay within the law and they stay true to themselves. Klaven and Fife (did I emotion that' a great last name) are just as goofy, silly, childish and immature as any other male of any age (we're like that ladies). But here's the twist, they're nice to women and the only people they mess with are the rare assh*le who deserves a poke in the nose. What a great cinematic concept. Where has this been all these years?

One thing that has been proven is that just because the subject of a film is stupid doesn't mean the film has to be. You can take as a basic premise a couple of total goofballs hanging out trying to get laid and make an intelligent, even touching movie. Moreover you can get lots and lots of laughs without hurting anyone.

Of course the inevitable question about male friends who are close these days is: are they...you know? You mean GAY?? In the cases of these films they are not. However it is refreshing indeed to see that the gay characters, like Klaven's brother in I Love You, Man played by Andy Samberg, are NOT cardboard cut out stereotypes. I cannot presume to speak for my gay brothers and sisters, but it seems there is nothing offensive in either the portrayals of gay men in these films or the treatment of those characters by straights. Progress.

For that matter its not too much of a stretch to say that Milk (2008) focused to a degree on some platonic male friends. While the title character was indeed involved with several characters sexually, there were a lot of men working together and being close friends without jumping into the sack.

I may have just come up with an idea for a screenwriter looking for a story. How about a male buddy picture between two gay men? Or a gay man and a straight man?

I should add that films like I Love You, Man do not just appeal to men. Indeed I believe they have a broad appeal (that pun was NOT intentded and if it was it would have violated the spirit of the post). If there was a targeted demographic for the movie I doubt I was part of it. A few years ago the premise of the film would have sounded dumb. But that's only because these types of film were so bloody stupid. Now, they can and often are good films and good films appeal to all types of film goers. You combine laughs and an intelligent story and you're on to something.

You've totally got to see this movie, man. It's awesome. See it with your best bud.

Posted by Richard Hourula at 5:57 PM