1967, The Year the Seventies Began in American Film 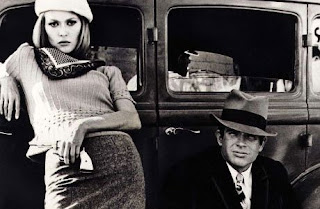 There were more great American films made in the 1970's than the combined output of the ensuing three decades.

The many factors involved have been discussed ad nauseam by film critics and historians and know nothing bloggers like myself. There were a slew of dynamite young directors converging on the scene in the 70's (Coppola, Scorsese, Spielberg to name but a few). The French Wave was belatedly exerting an influence. The censorship imposed by the production code had given way to the film rating system. The cultural upheaval of the Sixties was effecting the type of films people made and wanted to see. And, not incidentally, neither the special effects revolution nor the concept of the blockbuster were ruining the industry.

The story of these two films along with the other three nominated for 1967's Best Picture Oscar is wonderfully told by Mark Harris in Five Movies and the Birth of the New Hollywood. It's one of the best books on film ever and I'm highly recommending it with no cash, gifts or thanks expected either from the author or publisher (though I have a strict policy of taking any payola I can get my grubby mitts on).

The Graduate and Bonnie & Clyde were joined as nominees by the well-intentioned In the Heat of the Night (which won) a post Civil Rights movement look at race relations in the South via a detective story. Sidney Poitier and Rod Steiger co-starred, the latter winning the Best Actor Oscar for his portrayal of a racist but ultimately reasonable cop. Norman Jewison directed. Poiter appeared in another nominated film, Guess Who's Coming to Dinner? which appeared dated about a month after its release. Poiter was too perfect as the fiance of a young white woman (forgettably played by the forgettable Kate Houghton who had the good sense to leave films soon thereafter). The woman's parents would have their liberal views on race relations put to the test by the engagement. The parents were played by Spencer Tracy and Kate Hepburn in their final film pairing, indeed it was Tracy's final screen appearance, he died shortly after production ended. The final nominee was Dr. Doolittle, a disaster in virtually respect save the producers’ successful campaign to garner Oscar nominations, best pic among them.

Harris does a masterful job of relating how the five films came to be. He neither discusses one movie at a time nor goes strictly chronologically. He’ll follow one fact of a movies story until just before its exhausted then move on to another. I found it all surprisingly compelling, in large part owing to Harris’ story telling capabilities. He manages to include plenty of juicy gossip and anecdotes but its never prurient or gratuitous. You want a primer on old Hollywood breathing its last, this is your book.

While reading Five Pictures I variously wondered how any movie ever gets made and how all films don’t end up being perfect. In both cases it is the human factor that makes for either brilliance or disaster.

There are personalities aplenty in the story who readers will come to love, hate, admire or want to debate. There’s the writing duo of Robert Benton and David Newman who conceived the idea for Bonnie And Clyde, wrote the screenplay then doggedly pursued a producer who could get the film made. There’s Rex Harrison, so charming and warm on screen such a noxious prima donna off. And Sidney Poiter. Heroic. Conflicted. Having to act as virtually the sole representative of all African Americans in Hollywood and often assailed by all sides in the process. You'll also meet the wunderkind of Hollywood, director Mike Nicholas who would snare the best director Oscar.

Of course the focus of the story and not incidentally the most intriguing part of it is the making and consequent successes of The Graduate and Bonnie & Clyde. That neither won the big prize is no surprise given Oscar’s history and the times in which they appeared. They were surprising smashes and foretold a new era of imaginative, risk-taking film making. Indeed, they helped topple the censorious production code. Their critical and box office acclaim foretold a time when American film finally caught up with Europeans in creating more personal movies that spoke to the Baby Boom generation and America’s social upheaval.

In my next post I’ll examine the aftermath of 1968 Oscars in film as it related to yours truly. Meanwhile go buy yourself a copy of Harris’ book. Thank me later.
Posted by Richard Hourula at 5:21 PM

Riku, a most intriguing post. I've never understood how "In the Heat of the Night" won the Oscar for best picture (or the award from the usually more perceptive NY Film Critics) over "Bonnie and Clyde." It's a very good mystery/procedural with an unusual racial twist, but not the groundbreaking masterpiece that "Bonnie and Clyde" is. Mike Nichols deservedly won both the Oscar and the NY Film Critics award as best director for "The Graduate," but I can't help wondering if his failure to win the year before for "Who's Afraid of Virginia Woolf?" gave him an edge over B&C's Arthur Penn. A great film from 1967 that I recently discovered (and wrote about at The Movie Projector) is John Boorman's "Point Blank," which looks both back (in its subject) and forward (in its style). In quality and individuality, it's of the same caliber as "The Graduate" and B&C. I'm looking forward to the follow-up to this post you promised.

Hey Bro, you totally forgot the psychedelic journey through America, Easy Rider. Heck, man, that movie started the 70's. It was a groovy look at how America was, like, holdin down the man and stuff, man. Not to mention ol' Jack Nicholson was nominated for and Oscar and stuff for his tubular turn as the lush lawyer George Hanson. Directed by trippy surrealist director Dennis Hopper, Easy Rider had as much to say about America as America had to say about long haired hippie freaks, with their sexual ways and their uprising manner. So don't bogart this film when you're talking about when the Seventies began, which is 1969.

Really though, other than this film, you're absolutely correct.

Totally agree with you on Mark Harris' book. Definitely, a must read for any serious film lover of 70's cinema. Here's my own review on the book at my blog 24 Frames.

The 70's began in 1967 and died around 1976 with the mass booking of "Jaws" and soon after "Star Wars." With these films the Hollywood money men realized they can do book "high profile" films into thousands of theaters on opening weekend and get, or try to get, their money back quick as possible.

R.D. - Harris points out in the book that of the five Oscar nominated films that year, "Bonnie and Clyde" and "The Graduate" represented the new guard while "Guess Who's Coming to Dinner" and "Dr. Dolittle" the old guard. "In the Heat of the Night" was sort middle of the road. Still somewhat innovative in its approach to black/white relations yet not so radical in filmmaking technique and on screen violence and sex like the first two. Nor old fashion fodder like the two studio relics.