A Story As Timely as If Ripped From Today's Headlines! 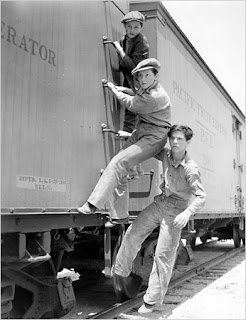 
Not exactly the fare one associates with films of the 1930's. But it's all part of director William Wellman's, Wild Boys of the Road (1933). As is a teenager complaining to a judge about how banks, soldiers, farmers and breweries are getting help, but "What about us? We're kids!" This is not the "let's put on a show!" hokum most are accustomed to from 1930's cinema. Wild Boys is part of the truly Golden Age of American film known as the pre code era. Censorship was not rigidly enforced and films tackled mature and controversial subject matter in a way they would not be able to again for several decades. (See my recent posts on the pre code era. The first is linked to this sentence. And the second to this one.)

I hope you all saw Wild Boys on TCM the other night or that you taped, Tivo'd or VCR'd it. If not thank your lucky stars that it's finally come out on DVD.

This is a movie that pulls no punches; I submit as evidence the beginning of this post.

Two teens in Depression Era America take to the road to relieve their hungry families the burden of feeding them. The central character, Eddie, is so selfless he's already sold his beloved jalopy and given the cash to dear old dad. Along the way our friends meet a fellow traveler, a lovely young girl badly disguised as a boy. Not surprisingly their numbers soon multiply as other adolescent vagabonds join them. They ride the rails seeking an elusive job, along the way providing each other with company and solidarity.

Meanwhile they constantly run afoul of authorities, who after all have to enforce the laws of the land. These desperate times call for desperate measures and the waifs take on first railroad bulls and later the police. The results of this latter battle are inevitable.

Wild Boys is a great companion piece to John Ford's Grapes of Wrath (1940). Both show a bent but not broken country in which the American dream has given way to nightmare. The rich and powerful have survived the Depression relatively unscathed while the masses have taken a direct hit. (This would be an appropriate point to pause and read the great Langston Hughes poem "Let America Be America Again" which this sentence is linked to.) Both Wellman and Ford were depicting an American in which the indomitable will of the people could take on and perhaps even overcome any hardship. Their films show the ugly truth of America during the depression. Good people resorting to any measure, even slipping into lawlessness, in a desperate attempt to maintain their dignity.

What is dignity if not a roof over your head and a full belly for you and yours? Is it not also self sufficiency? The myth perpetrated over the years by conservatives is of legions of American with their hands out begging for government relief or welfare checks. That's not most Americans. Most Americans will accept a temporary handout but truly desire a long term solution. As far as these people are concerned a government that has done so much for businesses is more than welcome to help. That law abiding Americans were forced to resort to crime speaks of America's great peril. This also, not incidentally, serves as a primer to what poverty does to those who suffer it in, even the best of times.

Wellman and Ford have captured the struggle that ripped not just at the social fabric of the country, but within the souls of Americans. Whether it is Henry Fonda as Tom Joad or Frankie Daro as Eddie or anyone of dozens of other characters, the bewilderment mixed with moxie combined with faith are etched in their faces. And thankfully Wild Boys shows that not all such faces are white. These films are prescient today as America teeters precariously on the brink of another Depression and its citizens rage at corporate heads handed huge bonuses as rewards despite public records of incompetence.

Wild Boys ends with a note of hope. Our arrested heroes face a kindly judge who gives a personal pledge to help. Eddie's somersault down the sidewalk bespeaks the renewed optimism Americans were starting to feel at the time of the movie's release. After all they had just elected a new president who offered hope after the failed policies of a Republican. Wait, that really sounds familiar.....
Posted by Richard Hourula at 8:25 PM

Wonderful post! I've always loved pre-codes that dealt with the hardships of the depression, but when I watch them nowadays, the parallels between the 1930's and today seem way too scary.