I Write Again at Last, Topics Include Valentine's Day, The Oscars and My Forthcoming Retirement 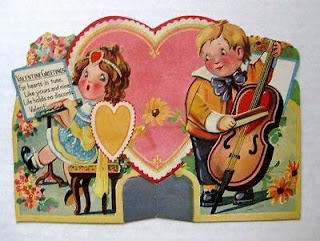 Good god it's been a long time since I've written on this here blog. And it was a long time before that.  In my defense it's not like anyone is clamoring to read what I have to say (except for you, Klaus Berger of Utica, NY).

It's Valentine's Day and I've always had mixed feelings about the day. The "holiday" is really just a way for greeting card and candy companies to make a buck -- not to mention florists. I don't mind it so much though because I've had a Valentine for over 30 years, my beloved wife. It's not a great day for people who are not in relationships, particularly those who've recently been dumped. It can be a very special day for people in new relationships, especially those in their embryonic stages. And it is a damn silly day in schools, especially elementary schools where students exchange cards with little candies. Everyone gets one so it has no meaning. I realized that back in grammar school days (when dinosaurs roamed the Earth). Today you have people -- usually high school students -- walking around with huge heart shaped balloons. They're an absolute delight on public transportation and classrooms.

February 14th is also the anniversary of the St. Valentine's Day Massacre, although few people celebrate or acknowledge it. Hey it was a seminal point in prohibition-made gang warfare and provided a key plot point for the great Billy Wilder film, Some Like it Hot.

Speaking of movies...the Oscars have no host this year which is still another reason not to watch (like I needed any). I've made my views known about the Oscars in numerous posts which are linked in the labels section to the right. Suffice to say that any organization that deems Crash a good film, not to mention the best of the year, doesn't know Citizen Kane from Shrek. And don't get me started on all the greats who never earned a competitive Oscar because if you do I'll mention Alfred Hitchcock, Charlie Chaplin, Cary Grant, Richard Burton, Montgomery Clift, Barbara Stanwyck, Robert Altman, Orson Welles, Stanley Kubrick, Howard Hawks...and that's just for starters. Besides not having a host the Oscars will be presenting some awards during commercials. Most egregious is the Oscar for best cinematography. In my estimation this category ranks among the five or six most important. The people who organize the Academy Awards are idiots.

Getting back to the paucity of recent posts....I mentioned before that I'm preparing a novel to send to potential literary agents. I find the searching for possible agents and the crafting of the query letter to be thoroughly unpleasant (albeit necessary) tasks. I'm struggling with it. So that and final, final revisions are soaking up a lot of my free time as is my job. Why my job? Because I'm retiring in two weeks and am determined to be able fly out the door after my last class with no loose ends to tie. Plus I'm getting a lot done in advance for my final fortnight to make my last working days as easy as possible. Suffice to say I'm most excited about my pending retirement. Especially the parts about not having to wake up when an alarm tells me to, not having to commute and having oodles of time to myself. Will I miss teaching? We'll find out.

Okay, I hope this little writing will hold my legions of fans (both of you) for a bit. I think it safe to say that I'll be writing more regularly when I'm a retiree. Please try to contain your excitement.
Posted by Richard Hourula at 12:23 PM No comments: