Of a Wienie King, the Ale & Quail Club and Airports Suspended Over Cities 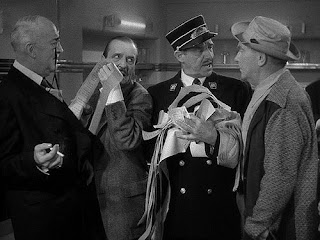 Last night I needed an antidote to having watched a long movie that took itself way too seriously. Yes, what I needed was a short movie with no pretensions other than to make people laugh. Nothing can fill such a prescription any better than Preston Sturges' Palm Beach Story (1942).

While the dull over wrought film of earlier in the day insisted that life is fleeting and desperate, Palm Beach Story says that life is wild and wonderful and you'd better fasten your safety belts, or not.

There is much to be said for films that starts with the basic premise that stretching a story just beyond credulity can illuminate life's absurdities while entertaining audiences. There is as much to be learned about the human condition from good comedy as from serious scholars. For one thing, the latter can be such awful bores and good comedy keeps us wide awake.

I've written a lot about Sturges, whose directorial career was brief but brilliant. He had an uncanny ability, like the Marx Brothers, of being at once zany and intelligent. His humor appeals to all ages and types. Sturges slyly comments on hero worship and bravery in Hail the Conquering Hero (1944) and on politics and corruption (I know, same diff) in The Great McGinty (1940). While his topics aren't so broad in other films, he manages wry observations on life and love, as with these gems from Palm Beach Story: "Don't you know that the greatest men in the world have told lies and let things be misunderstood if it was useful to them? Didn't you ever hear of a campaign promise?" and "You have no idea what a long-legged woman can do without doing anything."

Palm Beach Story also features a man falling down the stairs and accidentally exposing his bum to an elevator full of people. The Ale & Quail Club is just plain silly but Sturges lets off the gas just before it gets to ridiculous. It's what the great ones can do: push boundaries without crashing through them into the tediously silly.

Let's not forget that no such comedy can succeed without skilled performers. Sturges scored big time in the casting department. In Palm Beach Story he had Joel McCrea and Claudette Colbert in the lead. You can do just as good but no better. Co-starring were Mary Astor (I cannot imagine living so long as to tire of seeing or hearing her) and of all people Rudy Vallee (though you might swear its a young George Will). But with Sturges you also get his usual stock company. Any group that includes William Demarest, Jimmy Conlin, Franklin Pangborn and Al Bridge is plenty okay by me.

(An aside: The cast also includes "Snowflake" in the role of the "Colored Bartender." IMDb has cleaned this up listing Snowflake's real name and calling him George, Club Car Bartender. This raises the issue of whether it is more important to avoid offending people or to be historically accurate. This is one of a growing number of topics I'll promise to address some time in the future.)

McCrea is a an inventor married to Colbert. He has devised a plan by which an airport can be suspended over a city (works for me). All he needs is an investor. Colbert is tired of struggling to make ends meet. They are rescued from their latest gem by The Wienie King. A little old man who's made his fortune in the sausage business. He takes a liking to Colbert and hands her a wad of bills.

The real antics begin when Colbert flees by train from New York to Palm Beach, without a dime to her name. She's taken in by the Ale & Quail club, a group of filthy rich drunken hunters. On the train she meets a zillionaire played by Vallee who falls for her. It gets even nuttier from there. How it all works out at the end is farcical and fun and linked to the opening scene, all of which is open to interpretation and well, you'll just have to see it.
Movies like this are just what the doctor ordered when you've got an occurrence of the miseries or have spent too much time contemplating the universe or, as in my case, have just endured a self important modern film that drags on. But ya know what, Palm Beach Story is good anytime. Don't take my word for it, ask any member of the Ale & Quail Club.
Posted by Richard Hourula at 10:51 AM

Riku, like you I'm a great fan of Preston Sturges. I recently got a multi-disc set from the library, intending to watch "Hail the Conquering Hero," which I hadn't seen in decades and which a recent post of yours piqued my interest in. I ended up indulging myself in a mini-Sturges festival, watching several of the films. But I have to say that of all of them I enjoyed "The Palm Beach Story" the most. In fact, I would say it's the most enjoyable film I've watched this year. Mick LaSalle calls in Sturges's funniest movie, and I have to agree. I watched the movies with a friend who was unacquainted with Sturges, and he loved the movies too and picked "Palm Beach" as his favorite.

This one is probably my second favorite Sturges movie-- after Miracle of Morgan's Creek.

What movie had you been watching earlier, pray tell?

Ah, that makes sense then.