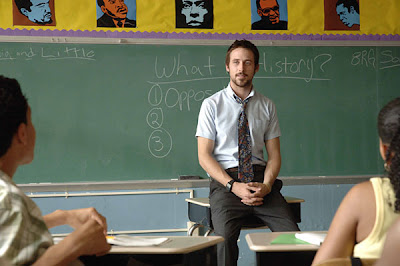 Now we're really into an area of my expertise. I dedicated 20 years of my life to teaching in an urban middle school. In fact I still dabble in the profession as a substitute ( a position a notch below dung shoveler). One might think that my experiences have made me jaded and cynical. One would be correct.

Quite honestly, teaching is a profession that serves as a perfect metaphor for life. There are incredible highs and lows and if you pursue it with any sort of passion there's never a dull moment. One minute you feel like banging your head against a wall, the next you want to skip merrily down the lane singing a happy refrain. The key is to show up each and every day.

You should not be surprised that my list of ten favorite teachers in American films is somewhat eccentric and certainly irreverent. You will not see any of those ridiculous only-in-Hollywood teachers that I find so insulting. No Glenn Ford from The Blackboard Jungle or Sidney Poiter from to Sir With Love or Michelle Pfeiffer from Dangerous Minds or Edward James Almos from Stand and Deliver or for Gods sake's especially no Richard Dreyfuss from Mr. Holland's Opus, the single most depressing movie ever made and you have no idea how sick I got of people asking me if I'd seen it.

I'm dealing in the real world people (as viewed by a teacher). Not only are we safe to assume that these were teachers good but by God they were interesting people. Here goes.

Ryan Gosling as Dan Dunne in Half Nelson (2006). Hands down my favorite all time teacher on film and the one I could most relate to. Like me a middle school history teacher who coaches a team. Half Nelson was a terrific film in large part because of Gosling's amazing performance. Dunne was clearly a good teacher who cared about his students. A little time in rehab and he'd be good to go until total burnout or relapsing.

Matthew Broderick as Jim McAllister in Election (1999). Okay so he cheated in a school election and on his wife and fantasized about a student, nobody's perfect. Election offered one of the more realistic looks at schools you'll ever see, so of course it had to be in the guise of a comedy. Election launched Reese Witherspoon's career but to me Broderick stole the show as the totally conflicted teacher. He is a model for how flawed we teachers are and he provides a blueprint for what not to do.

Kevin Kline as Howard Brackett in In & Out (1997). True story, I had Kevin Kline's niece and nephew as students (the nephew confirmed that Uncle Kevin included a fairly nice check with his birthday card). Brackett is a high school teacher outed on national TV before he himself knows he's in, so to speak. Forget for a moment though whole outting business, any teacher who gets thanked in prime time is living the dream, baby. He had to have been good. On top of that, the whole community rallies around him. Also watch Bob Newhart as the quintessential administrator, ready to lean in any direction the prevailing winds blow.

Dick York as Bertram T. Cates in Inherit the Wind (1960). Cates did not waver from his convictions. The man believed in something called evolution and taught it. In Tennessee! In the 1920s! You have trouble getting away with that in parts of Kansas today. Plus he was smart enough to sit back, shut up and let his lawyer do the talking.

Vivian Leigh as Blanche DuBois in A Streetcar Named Desire (1951). So she had a dalliance or two with some students, we've already established that nobody's perfect, not even teachers (though we're expected to be). Can you imagine the love she could inspire for her great poets and playwrights? The readings she could give! Sure Ms. DuBois might seem a tad odd to some of her students, but others must have been captivated by her, shall we say, unique interpretations of literature. I'd sit in on that class. She could be the drama teacher and curriculum all in one.

Suzanne Pleshette as Annie Hayworth in The Birds (1963). First of all we're talking about a 26 year old Ms. Pleshette and you'll just have to excuse my momentary lapse into pure animal lust. Hubba hubba. Anyhoo you may not recall from the film but she had admirable control over her roomful of charges when a flock of birds with murderous intent came a calling. She was cool, collected and easy on the eyes (oh my that rather bad pun was unintentional).

Tom Hanks as Capt. John H. Miller in Saving Private Ryan (1998). Remember the big deal among the soldiers wondering what Miller did as a civilian? Then at a moment of extreme tension he settles everyone down by quite suddenly revealing that he was high school English teacher. Given the outstanding leadership he provided his men, Miller must have been one whiz bang teacher. And he's Tom Hanks for crying out loud, who wouldn't want him or one of his characters as your teacher? (Another true story: my first principal was, still, is for that matter, Hanks' sister-in-law.)

Cathy Downs as Clementine Carter in My Darling Clementine (1946). No such list is complete without a good old fashioned school marm and who better than the lovely Clementine? She essentially lost two men in the course of film but was tough enough to stick it out in Tombstone of all places and stay on as a teacher. You know good and well she'd have no trouble with a bunch of snot nosed kids.

Arnold Lucy as Professor Kantorek in All Quiet on the Western Front (1930). Talk about inspirational! You see him exhort his students to join the army and fight for Germany's glory? Magnificent! A teacher who can inspire a room full of students to do anything is to be admired, but to fight in a war? Awe inspiring.

Robin Williams as John Keating in Dead Poet's Society (1989). Hollywood keeps trying to ram inspirational teachers down our throats. At least for yours truly it flat out hasn't worked. The closest thing to an exception would be William's Oscar nominated performance as Mr. Carpe Diem himself. I was just embarking upon my teaching career when this film came out and it actually influenced me. I did the whole standing on desk routine, the tearing a page from a text and the whole tick off the administration thing (not hard, just express an original idea). Keating inspired a love of poetry and he did it by urging students to dare to see the world though their own eyes. He actually tried -- successfully I might add -- to inflame their passions. Plus he coached the soccer team -- just like me.
Posted by Richard Hourula at 10:03 AM

Nice list. There's a few on here I haven't heard and will check out. I would have added Robert Donat in Goodbye, Mr. Chips, but I can't really argue with your choices.