Whatchyou Talkin' About? -or- The Curious Case of The Conversation's Harry Caul 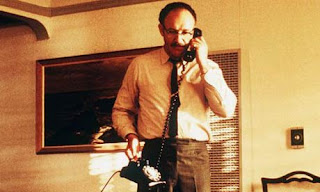 He's rather an odd duck, this Harry Caul fellow, wouldn't you say? He's widely recognized as the best in his field (audio surveillance). But he's got all the wit and charm of a hockey puck. Please don't ask him any questions -- he hates that. Here's a guy who listens in on what other people say, who's very particular about his own privacy. The hypocrite. Stay out of his business, stay out of his place, keep your distance. Why he'll even outright fib. Nothing major, mind. Lops two years off his age. Wow, says he's 42 when he's 44. Odd sort of fabrication, don't you think?

He's got a girl. Physically Harry will get real close. But that emotional distance you could drive a semi through. Won't even tell her his occupation. Bristles at her questions (told you he don't like that). Quick to anger and walk right out. And that anger is not the yelling or hitting kind. No it's that frustrating simmering, short with words, sudden shut down type. Can't really engage that, your just out. Harry likes it that way. If your not in you're all the way out no ifs, ands or anythings.

Gene Hackman was the actor who had the daunting task of playing Harry Caul in director Francis Ford Coppola's The Conversation (1974). Not the kind of role you can really go nuts with. Easy to play broad, emotional, angry types. But what a challenge to be so contained. So quiet. So bloody baffling. Hackman did it though. Boy I'll say. What a performance.

The Conversation is a fascinating movie. On the surface a pretty straight forward story. Guy hired to do surveillance believes his employers are planning to off the lovely young couple he's recorded. Attack of conscience, massive one at that. He can't let this go down. But can he stop it? Good thriller stuff.

But this film goes way beyond that. Yes it examines issues of privacy, but its so much more than that because you've got this Caul character at the center of the story.

And about that name...You know what a "caul" is? According to that Merriam-Webster bloke its "the inner fetal membrane of higher vertebrates especially when covering the head at birth." And our Harry is always wearing a translucent raincoat. No, no, you make something of it. What do you suppose the significance of that is?

I read one description of Harry Caul as "paranoid." Ya think? That sure comes out at the end of the film (which I'll not reveal here for those who are about to enjoy their first viewing of this wonderful film and hey it's about time you did) when he goes practically mental with paranoia. But is that really an important adjective for this Caul fellow? Paranoia is an exaggerated or unrealistic fear. This guy isn't so much afraid as he is concerned and his concerns are based on real world stuff of which he's an expert having listened to so much of it, don't ya know.

It's an odd business listening to other people talk. Subject to so much interpretation and so very easy to get it all wrong. Maybe better just to get your recordings and fork em over to those who really care. Come on Harry, leave it, they're paying you plenty and not a dime of it is for your opinion. You might just muck it up in the end.

The Conversation is a very 1970s film. Which is in my book, high praise indeed. Very character driven. One of them high falutin' "important" stories. And there's a strong dose of political paranoia (there's that word again). Seventies films betrayed a strong suspicion of governments, corporations and shadowy men behind the curtain that you should just ignore for you own health. These are forces Mr. Caul faces, with predictable results.

Did I say that I really like The Conversation? Well this is my reiteration. In addition to Hackman, it features John Caazale who was only in great films during his all too brief career, an impossibly young Harrison Ford, Cindy Williams, Frederick Forrest, Robert Duvall, Terri Garr and the wonderful Allen Garfield. Garfield who was also grand in The Candidate (1972), was made to play the schmoozy, sycophantic, wiseacre, hail fellow well met insider. There, I said it.

I could go on about the film and Caul in particular, but better you should watch it. What do you think of this endlessly uninteresting man who's such an endlessly fascinating character? Is he really all that aberrant? I mean for all I've said he's got some everyman bona fides. Really he walks the fine line between normal and wacko that most of us traipse along (those who don't are just plain nuts). And the story has resonance today and likely forever after. It's the type of film to re-visit every so often if only because you find something else each time. Just like Harry the obsessed does with his repeated listenings to that one conversation.

Anyone hear that? What was that?

Posted by Richard Hourula at 10:55 AM

I love this movie as well. It's a shame this film often gets overlooked. It's probably because of Coppola's other great movies of the '70s which were so epic. The Conversation is more of a psychological thriller type of film. Hackman and Cazale give great performances and the paranoia and claustrophobia make this a chilling and intense film.