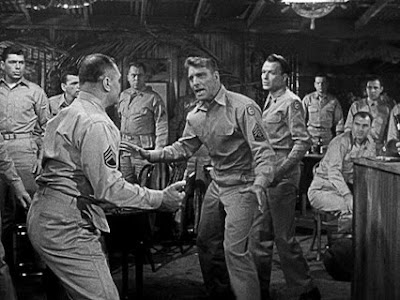 You visiting from another planet and wanna get a sense of what the male species is like round these parts? I've got just the thing for you. Will take just under two hours, Earth time. You sit yourself down and watch a film called From Here to Eternity (1953). Pretty much everything you need to know about guys, fellas, dudes, lads, men, chaps and gents is revealed in this movie.

Here's some of what you'll find out.

Men can be unreasonably stubborn like Prewitt (Montgomery Clift). He doesn't wanna box so by god he won't and there's nothing you can say or do to him -- and they try plenty -- to make him change his mind. You tell him to halt and you gotta loaded gun pointed at him, well if he doesn't wanna halt he's gonna keep going, damn the consequences.

Men can be stupid like Maggio (Frank Sinatra). Get stuck with guard duty when you'd rather be heading into town? He'll just go AWOL and get himself stinking drunk in the process. Damn the consequences and the consequences do damn him.

Men can be cruel. Get a load a Fatso Judson (Ernest Borgnine). Gets a guy he doesn't like in the stockade and he'll beat him mercilessly. Not a whit of conscience about it. Fella dies it's his problem, probly deserved it, he figures.

Men can cheat. Watch Warden (Burt Lancaster) diddle his CO's wife. He's not just having an affair with a married woman. The woman is married to his boss. And that very CO is no bargain either. He's squiring around another woman. Men do that sort of thing. They swear to one code, violate another.

But ya know what else? Men can be tough. They can take a licking and keep on ticking. Prewitt took all the abuse meted out to him and stuck to his guns, didn't squawk. Maggio endured some severe beatings but wouldn't holler. Not once. You could say men just don't know any better but the point is that they are durable.

Men are passionate and loyal. Yeah sure the love may be for a married woman or a hooker but the point remains. The loyalty may be for the army or to your buddies but it's deep and it does abide. Men can be tender and sentimental. Oh sure in some cases it only comes out during advanced states of intoxication but come out it does. Men put on a show but a lot of them are old softies.

Yeah men break one helluva lot of stuff, they're incredibly skilled at destruction. Start by breaking toys and not always accidentally. Later break blenders, cars, pencils, you name it. Some even advance to breaking bridges, buildings and whole cities. Oh men are a caution. But men can also fix things that are broken and by God can build too. I guess it's a push. Men build about as much as they destroy. Check it out, those were men in the planes reigning destruction in the movie. On a place other men built. That men came along and re-built.

That leads into another thing men do a lot of: fight and even kill. All those guys from the movie I mentioned did some fighting and some even killed. Sad to say men are really adept at physical confrontation. In the movie you'll see everything from fisticuffs, to knife fights to bombs from airplanes. The whys are for another time, fact is most men are natural born fighters and can easily advance to being killers. Sad, I know.

Here's another thing you'll see that come to think of it pretty curious. A lot of women really dig men. Least ways some men. Warden and Prewitt both had some pretty good looking dames totally gaga over them. Men can, after all, be handsome, kind, witty and even charming.

From Here to Eternity is a good place to start in anyone's look at male behavior. It's also a way to see some really good actors at the top of their game. Not just the previously mentioned gents but Donna Reed and Deborah Kerr too. The film's real success stems from how finely drawn the characters are. Ernest Borgnine as Judson is as no good a bully as you'll ever see on film. Sinatra was, as he correctly believed, born to play Maggio, the madly impulsive carouser, good time Charlie and hot head. Clift never gave a bad performance and was especially good as Prewitt, an ultimately complicated, perhaps even tortured soul. Lancaster's Warden was the ultimate man's man. Big, handsome, agile and a sergeant who was absolutely unflinching in doing right by his men. But it would have spoiled the movie if he was perfect. Nope, he had to be sleeping with a married woman just as he had to get rip roaring drunk on occasion to seem real.

You watch From Here to Eternity and as a guy you wanna slug Fatso, ya wanna hang out with Maggio, you relate to Prewitt and aspire to be like Warden. You also want to hook up with Reed or Kerr. You re-visit the movie because even if you never did a turn in the armed forces, you've been in those heavily male situations. You've seen how guys preen and strut and mark their territory with each other. You size up the other guys and find your buddies and become aware of your enemies and rivals. You also love each other in a manly sort of way. There are leaders and followers and thinkers and connivers and outcasts and you. The observer.

Course if you're here visiting from Saturn, you're not familiar with that stuff. So you just watch the movie to learn. And did I mention you'll be entertained in the bargain? It'll happen, trust me.
Posted by Richard Hourula at 1:52 PM