Some Like it Hot, But Only on Screen: A Guide to Really Hot Movies 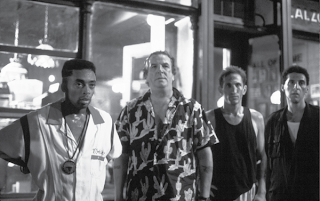 I hate hot weather so it's a good thing I live in San Francisco Bay Area, where in recent weeks we've been enjoying lots of fog and highs of 70 degrees. That's not to say I do not enjoy sweltering, blistering, humid heat. I do, so long as it's safely on film where I can imagine it without having to endure it.

Films at their best manage two complimentary feats: they paint vivid pictures for us and tap into our rich imaginations. With no slight intended to any of the arts, films are particularly good as showing yet leaving us room to complete the thought. There's no better example than hot weather in films. While you can see rain and snow, you can't really see a hot day. Certain screen images can evoke hot weather such as a focus on the sun and a sweating man walking slowly down a road, but we're left to fill in the details.

Good directors, cinematographers and actors are all required for truly hot weather scenes. Of course, the heat is always there for a reason. No director or screenwriter arbitrarily decides to have hot weather. Weather can be metaphorical, a plot point, or meant to create mood.

All of the films below include, for reasons viewers can decide for themselves, hot weather. Not warm either. Really hot. In all cases, viewers can (and I hope I'm not over reaching here) feel the heat.

Urban heat in Do the Right Thing (1989). The ultimate oh-my-God-it's-too-damn-hot film. Hot first thing in the morning. Hot late at night. And way, way too hot during the day. One of the great films of all time, in Do the Right Thing hot weather is integral to the story and director Spike Lee did a remarkable job of capturing one hot and ultimately tragic day. This may be a good movie to watch in the dead winter if you live in Minnesota or Finland.

Desert heat in Lawrence of Arabia (1962). You can work up a thirst just watching Peter O'Toole as Lawrence navigating the vast desert on a camel. This epic from director David Lean begs the question: people live in or near such places? Stranded or lost in the Sahara looks to be one of the worst fates imaginable. Lean creates a desert that looks not just foreboding but endless.

Jungle heat in Bridge on the River Kwai (1957). Another David Lean epic, this time in Burma with the heat no less foreboding. Several scenes come to mind. The newly arrived British officers made to stand in the blazing sun because they refuse to work, many collapsing as a result. Alec Guiness' character serving time in a hot box. Sweating, thirsty, cramped. William Holden's escape that takes him on a perilous journey, down the river, much of it with no water or protection from the sun. Yikes.

Courtroom heat in Inherit the Wind (1960). The sweltering heat of the U.S. south? No thanks. The 1920s courtroom in which much of the film takes place clearly boasted no central air conditioning. Look at all those hand fans go. No one in shorts or tee shirts or mini skirts either. This film will make you glad you live in a time when clothing is looser and shorter, air conditioning is de rigeur and there's no quarrel about teaching evolution in school (well, two out of three ain't bad).

Body heat in Body Heat (1981). As this is a PG-13 blog I can't really go where I want to with comments about this film. Suffice it to say that stars William Hurt and Kathleen Turner created a heat to match the weather. This was steamy, sexy heat, one of the few kinds I have no problem with. Body Heat is a rarity -- a 1980s film noir, and damn good one at that. Heat and all.

Ocean heat in Mutiny on the Bounty (1935). I've read quite enough about seafaring in days of yore to know about the horrors of the doldrums. Sailing ships needed wind to travel. When there was no wind a ship would make very slow progress indeed and this lack of wind was invariably accompanied by extreme heat. One certainly gets a sense of his experience in Mutiny. Charles Laughton's Captain Bligh shows little sympathy to his men's plight. Reason enough to become "mutinous dogs."

Marylin Monroe heat in The Seven Year Itch (1955). It's a heat wave in New York. The kind of unbearable weather that you can only wait out. Cold drinks and a good strong fan are life's only salvations. Unless of course you've got Marylin Monroe and a vivid imagination at hand. Such are the solaces for Tom Ewell in this Billy Wilder film about a married man alone and hot (literally and for that amazing blond).

Thirsty heat in Greed (1924). Back in the desert, this time California's own Death Valley. An aptly named stretch of real estate, especially as it pertains to Erich von Stroheim's silent classic (who else can't believe this still has not been released on DVD?). The desert, the heat, the suffering, the fates of characters are all metaphors. Have a metaphorical cool beverage with you when it watch it - - assuming TCM ever airs it again.

Chain gang heat in Cool Hand Luke (1967). Hard to imagine any fate worse than being on a chain gang, unless that chain gang was enduring a Deep South summer. This is a form of involuntary servitude and it's outdoors in the heat. A great film starring Paul Newman and George Kennedy. The former is a rebel with dubious causes and many gripes. Watch it with a class of ice tea.

Werner Herzong heat in Aguirre Wrath of God (1972), Fitzcarraldo (1982) and Rescue Dawn (2006). The great German director Herzog has put his casts and crews though seemingly unendurable conditions in several films, including extreme heat in these three (and the heat is just for starters, venomous snakes, pesky insects, torrential rains and jungle rot come in the bargain). Happily audiences benefit with some fine films. The first two were filmed in the Peruvian jungle. Aguirre about a Spanish conquistador over matched against natives and nature, the second about an eccentric determined to build an opera house in the jungle. Rescue Dawn was filmed in Thailand. It's the true story of American air pilot shot down and captured during the Vietnam war and his subsequent escape. All three films will make you sweat.

Posted by Richard Hourula at 10:48 AM

Hahaha, no complaints here. I like your categories almost as much as the films themselves! :)

You already had courtroom heat. What about jury deliberation room heat in "12 Angry Men"?

I don't know what to pick for Old West heat. Once Upon a Time in the West, maybe? The Wild Bunch?

i am so glad i caught greed (or what is left of it, at any rate) on tcm. sad to say it took me...5 months to actually complete it for some reason, but it's just so epic. what's not to love.