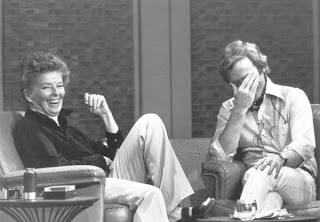 TOPIC ONE: The Great Interviewer

Asking questions is easy. Asking really good questions, not so easy. For my money (what there is of it) Dick Cavett is about as good as they get at posing queries. Especially of "important" celebrities. (I define an "important celebrity" as someone not just well known, like say Paris Hilton, but with a distinguished career, like say Martin Scorsese.)

Cavett was one of my idols growing up. We shared a version of the same first name, a height (or lack thereof) a hair color and -- I flatter myself -- a ready wit. I also admired his principled stand against censors. Cavett hosted a late night talk show in the late Sixties and early Seventies which was up against no less a personage than Johnny Carson. Cavett's program was not dissimilar to Carson's Tonight Show. Host introduced, played on by house band, opening monologue, variety of guests. However he did often give his show over to one guest. This was the entire format years later when Cavett moved to PBS for a half hour program.

Today Cavett has a twice monthly blog on the New York Times website. His last two posts have been about his PBS shows with famed Welsh actor, Richard Burton. Included are videos of the entire interviews. And thus your question: "what has Cavett to do with films?" is beginning to be answered.

A few years ago some of Cavett's shows were released on DVD including many with famous film stars and directors. Like the Burton interviews, film aficionados will not want to miss these.

The Cavett interviews are especially good because of his style. He is clearly and admittedly a great admirer of many of his guests, which is perfectly fine, so are we and Cavett is acting as our surrogate. We don't need film icons grilled, we want to hear stories and Cavett is a master of drawing them out. He knows when to back off and let them talk, when to ask a follow up question and when to change the subject.

He is charming, witty and quite intelligent but knows the interview is not about him but that famous person he's talking to. Cavett somehow melded an aw shucks native Nebraska style with an Ivy League education, all tempered by a career in show biz. He's affable but not cloying. Smart but not pretentious.

Best of all there is a spontaneity in the interviews (perhaps a by product of Cavett's years on stage as a comic) that keep them lively. There is no better example than when he surprised even himself by asking Bette Davis, "How did you lose your virginity?" It brought down the house (Davis included) but the great lady went on to answer the question!

Speaking of laughter, the Groucho interviews are among the funniest things you'll ever see and hear, but are also full on insight into his career and life. The interview with Fred Astaire is fascinating for how shy and withdrawn Astaire seemed at the beginning and the manner in which Cavett drew him out. He even got Astaire to sing a few songs.

The Welles interviews are great stuff too, as one would expect. Welles even recounts a quite accidental meeting with Adolph Hitler before the latter had achieved infamy.

If you've not seen the Cavett interviews I highly recommend you check them out, also see his interviews with rock stars, comics and political figures. Great stuff.

On Roger Ebert's blog, he's written an article about greatest film lists. A few of his points are worth noting. One that such lists are often just propagandizing. People or publications essentially boasting their favorites. Another point is that such lists can be interesting for what's there and readers should not focus on what's not. Ebert argues that top whatever lists can be a way to encourage people to see a particular movie or director. That's precisely why I like to look at such lists and why I write so many of my own. I don't want my readers (both of us) to worry about what I omit, but to see if there's anything I include that they might be interested in. Ebert also includes a recent list from England's Spectator magazine that he (and I, for that matter) found intriguing.

Something I found particularly interesting was a reader comment in which the person asked Ebert whether greatest film lists should be of what a person thinks are the best or are of their favorites. My response to that would be: what's the difference?

I used to make lists of what I thought should be there because they were the best. That's intellectually disingenuous if not dishonest. It suggests that your list of ten best westerns (for example) is merely a compilation of what you think should be included. What the hell use is that to anyone? It also suggests that the person making the list does not believe in their own tastes. "My favorite fruit is apple but I think oranges are probably better so that's what I'll say is my favorite." The whole point of art in any form is that we enjoy it for whatever reason. That's what makes it good. I mean really should you listen to a song and think, "I hate it, but it's good."

The biggest problem with best lists is that people will argue with you. "You like Bull Durham more than The Natural? What's the matter with you?" That's a discussion going nowhere lickety split. You might try asking the person why they prefer one film over another. If their response is, "I dunno, I just do." That's perfectly valid, though that's not a discussion about to happen either. It's always most productive for people to talk about what they like and not to criticize what other people like.

Posted by Richard Hourula at 11:09 AM

Thanks for sharing your thoughts on Dick Cavett...unfortunately, of the interviews you mentioned, I've just seen the Bette Davis and Katharine Hepburns interviews...I guess now I'll have to look into the others. He really was a great host. :)

Grand job! You just put into words all that I despise about lists. Many times we forget that enjoyment is often times what makes something great. Kudos.

i had no idea cavett was still hard at work! that's wonderful, i wll have to follow his blog now. unfortunately i'm with juliette as i've only seen the bette (her comments on the wedding night are SO PRICELESS) and kath inverviews and you are right, i'd never really though about how easily he maneuvers his subjects and kind of just goes with it, re: when katharine starts rearranging the furniture, never losing composure or control.