The Glories of Tarantino's Inglourious Basterds 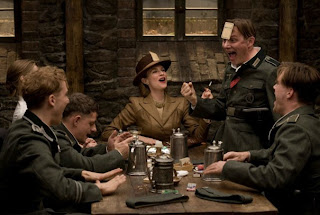 I saw Quentin Tarantino's new film Inglourious Basterds this afternoon. As you will read, I loved it. I felt compelled to write about forthwith but hardly am up to the task of a full blown review. The experience of this particular film is too immediate. To write anything truly meaningful of any sort of length would require more perspective and perhaps a second viewing (can't wait). There is quite enough about it on the internet to keep you busy anyway. However, I did want to share some scattered thoughts of mine and have done so below. Since the movie has only been in theaters for a few days I've been careful to avoid spoilers.

The biggest risk Tarantino takes in Inglorious Basterds is in the length of some scenes and the amount of dialogue in those scenes. It is a risk that pays off handsomely. Far too many modern directors like to jump hither and yon, not confident that they can direct a long scene or that their audience will sit through one. Tarantino has no such fear. In fact the movie's first scene contains a lengthy dialogue between two men, a French farmer and an SS officer. It is totally compelling because of the true nature of their discussion ( the farmer is hiding a Jewish family) and the bravura performance of Christopher Waltz as the officer.

Tarnatino is clearly a man very much in love with cinema. There is thus an exuberance to his film making and its never been more evident than with this film. He positively loves the story he is telling and the characters he has created. He wants us to love the film too but doesn't pander, he trusts in that story and in those characters. He doesn't manipulate scenes but let's them play out. I love it when a director trusts his story because it also means he trusts me. Tarantino is a true auteur.

The previews are misleading. The focus of the film in not on Brad Pitt and his merry band of Jewish American Nazi hunters. Their escapades are certainly central to the story but they are but one part. They in fact never even cross paths directly with a few other featured characters.

Roger Ebert had a great line about the film. He said the actors didn't chew the scenery but they did lick it. I couldn't have said it better myself but I sure as well wish I had said exactly that first. Waltz is especially mannered. It's one of those boundary pushing performances that is so good for being so daring. I love it when actors challenge conventions without lapsing into parody or caricature.

One of the things that I particularly like about Tarantino is that he is so good with his female stars. First Uma Thurman and Pam Greier and now Melanie Laurent and Diane Kruger. It's surprising to learn that he has only recently come to the films of Joseph von Sternberg who veritably made love to Marlene Dietrich with his camera in their many collaborations. Tarantino knows how to utilize, direct and film women. There are many great directors who never worked particularly well with female stars.

When going to see a film for the first time we cannot divorces ourselves from our preconceptions or current mood. Being exceptionally happy, anxious, sad or preoccupied can and often will be a filter through which we see a movie. I always go to a movie hopeful that I'm going to see something fantastic (seriously, who goes to a movie thinking they're going to hate it other than, perhaps, professional reviewers?). I was in a good movie viewing mood today, glad to be taking oldest daughter to a film. However I carried the burden of extremely high expectations. This is often death to a movie. Anything less than perfection can ruin a perfectly good movie saddled with unrealistic expectations. But Inglourious Basterds was so good it didn't matter. It's the best film I've seen in theaters since No Country for Old Men (2007).

Films based on actual events often get blasted for straying from those actual events. Inglourious Basterds doesn't so much stray from history as re-write it in toto. Don't know that anyone has squawked about it so far but anyone who does shouldn't be taken seriously. As Tarantino has explained, he was letting the story be driven by the characters. Good for him. Artists often feel too hemmed in by empirical fact. Live a little. There is a time and place for historical accuracy. This film was clearly not one of them.

Nice to see Mike Myers in something other than one of his own disasters. Maybe he'll settle in for awhile as a character actor. He clearly needs to stop writing and directing for a bit (he hasn't made a really good movie since the first Austin Powers film, though the second was passable). He's too good to go away entirely for any length of time.

There is the small part of a waitress played by a young French actress named Anne-Sophie Franck. She's got such a captivating face that I'll bet you a donut you'll be seeing her in more prominent roles in years to come.

I love the shot of the cream and the strudel. That was a nice touch that shows a film maker who is patient and meticulous. Reminds me of the Coen brothers shot of the uncrinkling wrapper in No Country.

Posted by Richard Hourula at 5:28 PM