The Audacity of A Streetcar Named Desire 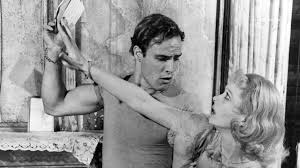 Other movies try to replicate reality. People go about doing and saying things that are quite typical of the sorts of things people say and do. Situations depicted are not only possible but probable. That's okay.

Still other movies stylize reality. Take the ordinary and stretch it. A motorcyclist fleeing an assailant manages a fantastic leap over a chasm. A hero miraculously fends off a pack of armed enemies single handedly. That's okay.

Finally there are those movies that stylize the ordinary. Example: A Streetcar Named Desire (1951). There is nothing that happens in the course of the movie's two hours that is at all extraordinary. A woman might come stay with her sister. Men work, and bowl and play poker. People argue loudly, forgive readily. Men court women. Women get pregnant. There are plenty of instances of insanity. Garden variety stuff.

Oh but to watch these people talk!

Indeed there is a hypnotic quality to director Elia Kazan's film. Yes it's mostly Brando, Leigh and company, but Streetcar had to be black and white. It had to feel increasingly cramped. You had to feel the humidity. How did Kazan make the movie seem so humid? Somehow you watch the movie and you sweat. The "action" is so often set in one place at a time (not surprising given the film's origins as a play) but there's such a sense of movement.

It's a lot of talking. But the way they talk is so damn compelling. You don't hear every word. You'll even miss a snatch of dialogue here or there because you're so taken in by the sheer bravado of the performances. Anyway, many of the words are just props. It's the way they are spoken that's important. Watching Streetcar is like listening to a great singer. The lyrics can be secondary at times to the manner in which they are conveyed.

Brando embodies masculinity and sexuality. It's not just the torn shirts, the muscles or the bluster. It's the delicacy too. The tilt of the head, the gestures, the softness and even tenderness of his movements. Imagine a man at once macho and delicate. The template for thousands of actors since. Anyone who is going to depict losing his temper on stage or screen would be wise to watch him. But don't miss his contrition either. The bully whose conscience always shows up too late.

Leigh gets away with murder. She positively devours the scenery. It is a highly affected performance. I mean the woman's crazy, right, what do you expect? But watch her for awhile with the volume off. Is she trying to be 12 or 72? Coquettish one second, dismissive the next. Flitting about then contracting into herself. Look at her eyes. They look everywhere but at nothing. Dull while always moving. No more under control than her brain. Leigh tapped into her own experiences being bi-polar to play Blanche. Scary to watch her get lost in the part. But exhilarating too. The whole movie is that way. A term the kids used to use "a rush." And again it's not just that it's such a good film but -- here it is -- the way it's a good movie. There was a real commitment by all involved to take story telling to a different level. They busted loose, couldn't be contained -- like Brando's muscles refusing to stay within the confines of a shirt.

It's one hell of a risky movie to make. Who would be audacious enough to go so broad? Well, evidently Brando, Leigh and Kazan. They took reality and teased it from straight, limp roots into a while afro and bouffant and my God it's something to behold.

Posted by Richard Hourula at 11:22 AM