A Darker Shade of Cary 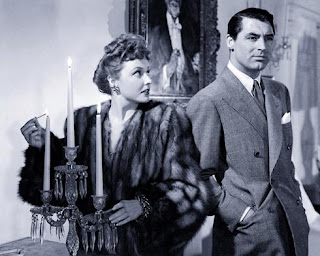 Who are you, Cary Grant? Are you just the constantly befuddled scientist snared by daffy Kate Hepburn in Bringing Up Baby (1938)? Are you the carefree, if recently deceased, prankster bon vivant of Topper (1937)? Maybe you're the conniving and indefatigable editor from His Girl Friday (1940). Or how about the witty sophisticate with peculiar marital issues in The Awful Truth (1937) and My Favorite Wife (1940). Say, it could be that you're the free thinking wunderkind from Holiday (1938) or perhaps the dashing sergeant from Gunga Din (1938).

Surely you are a happy, breezy sophisticate. Adored by and adoring of women. Fond of children and animals and a man always adhering to the laws of the land though never prudish about doing so.

Yes, we've seen a darker side to you both in Suspicion (1941) and Notorious (1946). But these were Alfred Hitchcock films and you ultimately proved to be morally beyond reproach. But I'm confused after seeing you in Mr. Lucky (1943). That was you alright. Same handsome face and lean solid build. As charming as ever and always one step ahead of the game. Maybe it was the tone of the movie but you seemed so very dark. In fact, I know part of it was the movie. So visually dark; it felt as though the entire film were shot with black borders.

You seemed to emit dark light. Sure, that's an oxymoron but that doesn't stop it from being properly descriptive. I guess a gun-toting gambler who wouldn't bat an eye at swindling charities out of their dough has to have an ebony hue. Yeah, sure, you're a charmer and a dame falls for you and you for her. But that's a bit of sideshow to your shenanigans, don't you think? You're just having a bit of fun and providing a diversion to your nefarious intent.n'est-ce pas?

Really, Cary, I've never seen you so willing to not just skirt the law, but brush off morality. I can't discuss the ultimate resolution of matters and whether you opt to, shall we say, "do the right thing" because there may be those eavesdropping on our little chat who've never seen the film. But nothing changes the fact that you come from such a dark place. (Was this closer to an Archie Leach character than a Cary Grant one? Is that it?)

There is a real sense of danger to you and your avocation. You deal on the fringes of society while being able to mingle with the very upper crust of that society. Gracious, you can even sit down at a table of older society ladies and knit. But all in pursuit of lucre. You're not vamping around either. You're full of intent. Not even cynical. Calculated.

You're a cheat, you're a draft dodger and you're a grifter. There is a sense of doom and foreboding to your story. Yet a woman loves you. It is from her (Laraine Day) that light emanates. You could bask in it, but at one point choose to run instead. You may have been oblivious to Hepburn in Baby but for the most part you've been in active pursuit or already blissfully joined with the women in your films. Who is this Cary Grant willing to dispense with so eligible a woman? Ms. Day is not just a very pretty face who has fallen for you in a big way. She's clearly a likely partner. Smart, charming and sophisticated herself. Every bit a worthy partner to you. Or is that just it? You, Cary Grant, feel unworthy of her? Can it be that this darker Cary has a conscience? While doing business outside the law do you need to adhere to a code? A code that forbids the possibility of risking taking advantage of so fine a woman in other way than collecting ill gotten gains? You were afraid weren't you? That's why you ultimately took the path you did. Could you have been living to these words not yet written, not in fact to be written until over 30 years later by a rock band, The Who?

But my dreams
They aren't as empty
As my conscience seems to be
I have hours, only lonely
My love is vengeance
That's never free

Ya know, I think I like this darker shade of Cary. Oh sure, I'll always love the Cary of screwball comedies. You're at once comfortable, interesting and entertaining as hell. Simply one of the best characters in film. But it's nice to see a maybe more nuanced character. The darkness becomes you. It's a sharp edge that never manages to cut. It's the knowing that you can, that you might, that you're capable that's so bloody arresting. Capable, that is, of..well we don't know what. We can imagine though. And that's just what you have us doing. Imagining. You're not right out there, your essence so clear and welcoming. We can't be sure what to make of you. How fun is the Cary of comedy? How fun is this Cary of mystery? Answer to both: very!

Who are you, Cary Grant? More than we know, I reckon.

Posted by Richard Hourula at 3:58 PM

Great post-- you describe him so well. People tend to think of him as one thing at a time. Either the suave and sophisticated guy or the screwball comic, and so on. Seems he was much more.

I agree that Cary Grant had hidden depths, because every once in a while, you could see that seeping out in a performance. Though I adore his suave, comic side, the Grant performances that stick with me the most reveal that darkness you describe (like in "Notorious" and parts of "Kiss Them For Me"). The way you have expressed this element of Grant's persona is practically haunting. Good writing!

Thanks for the Cary Grant post. Always nice to read someone else's views on the man. Just want to add that Arsenic and Old Lace is a terrific Grant film to watch. Oh, and one more thing...I agree with your country of choice - Suomi!!!
Anne (Valiaho) Doerksen :)

Appreciated your post on Cary Grant. This may not be important, but at one time, Grant entertained the idea of playing the phantom of the opera....yes, a monster, but a sympathetic one.
There were plans for him to be in the 1963 Hammer film remake. Think about that. Cary Grant behind a mask for almost an entire movie. He could actually do an entire performance without...'that face'. No problem with having to be remembered for...'that persona'. I think he might have been very good.
Somehow, someone convinced him not to do it. Character actor Herbert Lom eventually got the part, but that would have certainly been a dark part for Mr. Grant.