Uncle Tom's Cabin on Film Then, Why Not Now? 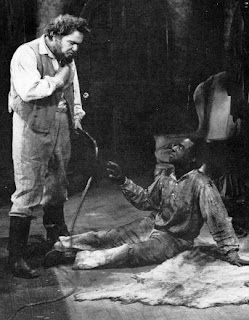 Last night Turner Classic Movies showed the 1927 version of Uncle Tom's Cabin. Many films reveal as much about the times in which they were made as they do about the times the story depicts. After the opening credits we get a picture of Robert E. Lee and an 1856 quote in which he calls the institution of slavery "a moral and political evil." He nonetheless fought for the Confederacy in the ensuing Civil War out of loyalty to his home state of Virgina.

The story begins on the plantation of the Shelbys "whose gentle rule of the slaves was typical of the South." Let's allow for a moment that people who keep others in involuntary servitude may have encomiums of any sort bestowed upon them, but this nonsense about typically gentle rule of slaves is utter balderdash. Indeed the movie pretty well goes on to prove the silliness of such a claim. We meet all manner of cruel and lascivious slave master, most notably one Simon Legree. Profiteers and slave catchers are also introduced. Gentle indeed.

The very notion that harsh treatment of slaves was the exception rather than the rule is a product of the film's times and the 50 or so years preceding it. The fiction of happy slaves, singing in the fields and reaping the benefits of serving benevolent masters was created in the antebellum period and persisted among many for a full 100 years after slavery was abolished.

The heroes of the film are George and Eliza whose wedding is the focus of attention as the story begins. Both are very light skinned (they and their child were played by white actors). Any slave with such light skin is the product of a few generations worth of miscegenation. This was generally in the form of nonconsensual sex between a master or overseer and a slave. It was one of the greatest tragedies of slavery.

Another great tragedy of slavery was the selling off of family members from one another. The supposedly kind and gentle Mr. Shelby sells Eliza's child away from her, prompting them to escape. As part of the same transaction, Uncle Tom is sold away from wife and child. Anyone who wonders why the term Uncle Tom came to be used by African Americans to describe their brethren who "sold out" to whites need only see this subservient character "in action." That being said, many slaves found that such obsequious behavior was their ticket to an easier life. It was a Hobson's choice.

The film ultimately steers so far from Harriet Beecher Stowe's novel that we see the Civil War break out and triumphant Union troops marching through the South. Yet it has much of the novel's power and every bit of its sentimentality. Despite his worst intentions, director Harry Pollard's film is about as searing an indictment of slavery as one could hope for from a 1927 film. For all intents and purposes Jim Crow was still the dominant figure in relationships and laws between whites and blacks in the 1920s. This would remain so until the Civil Rights Movement attained success.

It's worth remembering too, that the film came out less than 70 years after the events depicted. To put that in perspective, today we are a full 70 years from the outbreak of World War II in Europe. The closer one is to a time period the more of a cultural memory there exists of it, however skewed it might be by the dominant political narrative. In other words we have a huge advantage in making movies about Vietnam today that will not be enjoyed by film makers fifty years hence.

Watching this 1927 version of Ms. Stowe's novel got me thinking about why no one has ventured a similar effort since an ill fated 1987 TV production. Maybe the best film version wouldn't be based on the novel itself but on the furor its publication launched. Uncle Tom's Cabin stands as perhaps the most important work of fiction ever published in the United States. It's 1852 release helped add fuel to the burgeoning abolitionists movement and added to the growing schism between the North and South. To sight it as one of the major causes of the Civil War is not an exaggeration in the slightest. Ms. Stowe, abolition and slave escapes would lend themselves perfectly to a cinematic telling.

In fact, there are numerous stories from the time period that are begging to be made into feature films. How about Harriet Tubman and the Underground Railroad? The Nat Turner Rebellion? A bio pic on Frederick Douglass? Hollywood seems deathly afraid of stories showing chattel slavery in America. One hopes that misplaced fears of violating political correctness doesn't get in the way of telling compelling stories.

The history of slavery neither can nor should be ignored. It is impossible to understand this country's history without understanding slavery's causes, nature and ramifications. This study is, of course, rife with horrific stories that call to question the very nature of man. But there are also inspirational stories about the ability of human beings to survive, maintain dignity and find some solace. I taught U.S. History for 20 years and always exposed my students to the full scope of slavery. This included the very inhumaness of it. But I also hastened to add how slaves persisted in seeking freedom, knowing it to be their true birthright. I also emphasized the manner in which slave communities formed their own culture and through family, religion and customs experienced happiness in the worst of circumstances. Theirs is a remarkable story that should be told cinematically more often.

The 1927 version of Uncle Tom's Cabin is definitely worth a look see as an artifact of its time, if nothing else. It also serves to illustrate the paucity of efforts today to show this most horrible, and fascinating era.

Posted by Richard Hourula at 5:44 PM