They're Out to Get Me! I Swear, They're out There! Paranoia in Seventies Films 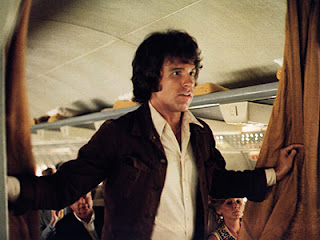 "Paranoia strikes deep
Into your life it will creep
It starts when you're always afraid
You step out of line, the man come and take you away."
From "What It's Worth" by the Buffalo Springfield

We are not in control of our lives.

The institutions that we count on cannot be trusted.

Our lives are cheap.

Especially if we know too much.

Or maybe if we don't know a thing.

It's "us" against "them" and they are all powerful.

Who are we? A resident in a Kafkaesque Soviet Satellite perhaps?

No. We are a character in a 1970s film and we're living in the United States of America.

We are Warren Beatty in The Parallax View (1974) trying to uncover the perpetrators of political assassinations. But will we live to tell the tale?

We are Robert Redford in Three Days of the Condor (1975) a government employee who only escapes death by literally being out to lunch when an assassination team hits our office. They are after us now and moreover they are members of our own government!

We are Dustin Hoffman in Marathon Man (1976) a graduate student caught in a web of international intrigue and duped by our own older brother, who we didn't realize is a government agent.

We are Gene Hackman in The Conversation (1974) tearing up our own apartment in search of a bugging device planted by someone within a mysterious corporation. One that hides behind a veneer of respectability.

We might even turn up in a combination sci fi/horror film like Alien (1979) where we are Sigourney Weaver watching as our fellow crew members on a space ship are killed by a monster and finding out its all been planned by a corporate power and that we're not supposed to survive the journey either.

What factors within our culture were in play that spawned such a high level of paranoia in films? First of all it wasn't technically paranoia. In all cases the fear was quite real. One of these characters even died as a consequence of what he knew. All save one had attempts made on their lives and one even endured torture. None ever really understood the whole story they were wrapped up in.

Some have claimed that the growing revelations of Watergate influenced these movies. But that's mistaken because the implications of Watergate were just beginning to be understood in the middle of the decade and it takes several years for historic events to really impact film.

More likely the answer can be traced to the 1960s when there was an increasing willingness to question government, especially in light of the disastrous war in Vietnam. America had undergone a period of tremendous social upheaval in the Sixties. Our institutions were no longer considered benevolent protectors. Indeed in light of a spate of assassinations in which the government might have played a part or at least did not adequately respond and especially in light of questions about conspiracies related to to those assassinations, there was a growing sense of distrust.

The Pentagon Papers, leaked in 1971, had proved beyond doubt that the government had at least misled the American people and in the eyes of many had outright lied to the public.

Americans weren't willing to blindly trust their government anymore. They also increasingly became aware of the unfettered power of intelligence agencies and the supplanting of small businesses by massive international corporations.

While spies had been heroes in films of the 1960s, ala James Bond, now many were taking a more realistic, less romantic look at cloak and dagger activities. The Cold War was less of a concern to most Americans, many of whom felt that the far away Soviet government wasn't as much a danger as their own. Besides, not all Americans still believed that "we" were, in all cases, the "good guys."

Of course, American film was enjoying a renaissance during the Seventies. Story telling was much more imaginative and themes were increasingly likely to be relevant and to mirror the new willingness to question authority. The old production code (read censorship) had been toppled. Meanwhile a new group of directors were emerging, including Martin Scorsese, Francis Ford Coppola and Steven Spielberg, who came out film schools and had been influenced by the French New Wave.

In 1967 Bonnie & Clyde and The Graduate had changed the tone of American film ushering a sort of US New Wave. Bad guys could be heroes, whether bank robbers or disaffected adulterous college grads. American film was ready to cast its heroes as something other than guys in white hats defeating a clearly identifiable foe. The changes in society and film allowed for villains to be shadowy, mysterious figures, even omnipotent corporations or government agencies.

While in reality challenges were being issued to "the establishment" by organized groups, the narrative of film was more suited to isolated individuals challenging a powerful enemy in an recasting of the David/Goliath theme. In some cases these were people who could be accused of "asking for it" like Beatty's investigative reporter; but they could just as easily be someone who'd been happily minding his own business, like Hoffman's graduate student, when circumstances conspired against (pun intended.)

While these films required the protagonists to act heroically, there was no leaping tall buildings or utilizing extraordinary talents or gadgets. They survived by wits and perseverance, and perhaps a little help from a friend.

These were entertaining films from directors like Coppola, Sydney Pollack and Alan Pakula. Part of these films' appeal was that they seemed to know something. Surely someone had a hint of a corporation resembling the one depicted in The Parallax View. And there must be rogue government operations as seen in Three Days and Marathon Man. It was as if the filmmakers were letting us in on some dastardly secret they had uncovered. The films were fun, thought-provoking, but also seemed to cast a light on some very dark corners of the country. They fed a hunger to know and understand more. The paranoia was not being experienced so much by the characters as it was by us. Could that really happen? Has it?

There was even a hint of this at the end of Raiders of the Lost Ark (1981). After a rollicking good adventure story we were left with the rather dour sight of evidence of a great biblical find being stowed away by the great bureaucracy that is our government.

Posted by Richard Hourula at 9:45 AM

All of these are terrific films. Good choices.