Finding the Truth Hidden Behind the Facts 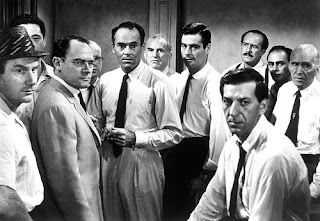 In his seminal book on America on the Sixties, Nixonland, author Rick Perlstein wrote of the faith Democrats had in their presidential candidate, George McGovern on the eve of the 1972 election. Polls had shown the incumbent Richard Nixon comfortably ahead for months. Perlstein related liberals undying faith to the film, Twelve Angry Men (1957). "It would end like (the movie) where only the jury's prejudices had blinded them from seeing that they were about to condemn an innocent man, and where the liberal's gentle, persistent force of reason had compelled the brutish conservative, by the last reel, to realize the error of his ways."

Alas, politics is rarely like the movies. Nixon won in landslide. (Twenty months later he resigned in disgrace, but that's another story.)

Twelve Angry Men is the story of possibility. How one man, unconvinced in the face of seemingly indisputable evidence, can gradually bring others around. These men must look at facts and find the truth hidden behind them. That one man (played by Henry Fonda -- who better?) does not use histrionics but reason. It is a triumph of logic and examination over bluster, over pomp over "the obvious."

Score one for the intellectual process. How often have Americans been swayed by leaders and voices who speak from the gut rather than the brain. Indeed as president George W. boasted of utilizing his gut. He and his supplicants, both in government and the media, were able to marshal "facts" to convince the vast majority of Americans about the wisdom of invading Iraq. The results were of course the greatest foreign policy debacle in America's history -- which is going some, I know.

There was no Henry Fonda to reason with W. and the American people. Fonda's Juror #8 from Twelve Angry Men could have calmly encouraged a closer look at the "evidence" being presented as justification for war. Why? It's what we're supposed to do in a democratic system. We're obliged to question the obvious.

The United States is and always has been a country riddled with faults. From slavery to the genocide of native tribes to corporate greed to efforts to block health care reform to Fox News, this country has had some serious messes. But this country is full of promises too and full of potential. Much of which can be found by a close study of the country's constitution (which barely survived the Bush/Cheney's years).

A jury of one's peers can sometimes overcome its prejudices through steady deliberation and render a fair verdict. It happens. Twelve Angry Men presents a case that is a veritable miracle. There is no dramatic movement, slow motion camera work or impassioned speeches. Just folks going over the minutia, looking at at it from different angles, until the truth becomes apparent to even the most bigoted. And even he, that most bigoted of men (Lee J. Cob as Juror #3) is exposed for what he is, even to himself. It is a thoroughly compelling film, with nary a special effect and has held up these past 50 years. Kudos to director Sidney Lumet.

Mr. Smith Goes to Washington (1939) is another film which presents a miracle forged by a man using the "system." A senator being railroaded by corrupt influences holds a one-man filibuster to expose the truth hidden behind an avalanche of supposed "facts." He wins against all odds.

Those of us on the political left are often plagued by an excess of idealism. We believe in the power of truth to convert. We think that by shining a bright light on lies and hypocrisy -- look there's a man behind the curtain! -- we can help the masses see the truth about a bumbling president or a wrongly accused man.

Movies like Twelve Angry Men and Mr Smith feed our idealism. But so too does our rare success, as evidenced by W's plummeting popularity in his last two years.

What led Juror #8 to question the obvious? It was his duty. His duty as a juror. As a citizen. He took his charge seriously. Imagine if half as many U.S. citizens took seriously their duty as Americans. To too many, patriotism is standing solemnly for the national anthem and perhaps, just perhaps, casting a vote on election day. For news and opinion they seek not divergent views but the words of those who will affirm what they already believe. They are swayed by ideologues (there's Fox News again) rather than their own study of the facts to find the truth behind them.

That's a lot of work. It's work most of us don't want to engage in. Juror #8 was willing to do the work and thus the other 11 gradually followed. Jimmy Stewart as Mr. Smith was on the verge of giving up -- always the easier course -- but was persuaded by his aide and love interest Saunders (Jean Arthur) to knuckle down and do the work that would not only vindicate him but bring down a graft ridden political machine.

Here then is what's so wonderful about these two films. They do not rely on super heroes performing the impossible, but on regular people doing the probable. So miracles do happen. They just require good ole fashioned work. That's how you can find the truth hidden behind the facts.
Posted by Richard Hourula at 10:21 PM

You put up some really good points about searching for the truth, not allowing others to sway you, the power of the people when they stand together for the right cause, and about the amazingness of this country's democratic system!

One thing though, and I know you were just quoting it, but, I was wondering how anyone could decide just by looking at "Twelve Angry Men", that Fonda's character was liberal and that Cobb's was conservative?

Because in opinion, it could easily be vice-versa (or it could be just as the Perlstein wrote).

I just didn't know why the author immediately thought it was that way (unless it is mentioned in the film...I don't remember it being mentioned, but haven't seen TAM in several months).

Sorry about this long comment! I was just wondering.

Good question. I think Perlstein was projecting how liberals felt just before the election and likening to how they felt about the film. The dominant narrative in this country is that bigotry is an affliction more common among conservatives. Certainly government policies that have helped minorities have more often been pushed by the left and resisted by the right.
Never ever apologize for raising a good point!

Okay, I see what you're saying and where you are coming from. Although I personally don't agree with that.

I would not call myself in any way a Democrat or a Republican. Even though I won't be old enough to vote for a couple years, I have closely followed politics and the such since I was ten. And, I've always been particularly interested in history.

I don't agree that "the right" has often been more resistant of policies that help minorities.

I do agree that there have been some really crazy people who are resistant of many good things...and masquerade under the name Republican (which is one of the main reasons I don't want to be affiliated with that name), which automatically makes many people assume that all people even remotely conservative are crazy and resistant too.

However, there are also some really crazy people on "the left" who have resisted important and good things too. But, I also know tons of really amazing cool people with liberal views (in my own family).

So, I don't think that because of a few, an entire group of people should be considered bigoted. Because it could easily go the other way too.

Millie, I hate to be rough with you but I must insist: STOP APOLOGIZING! There's absolutely no need to and it detracts from the points you're making. Now if you respond to this by apologizing for apologizing, smoke will literally come out of my ears and I will turn a deep shade of red.

Haha, I always do that though...even in real life (and people react much the same way). I always feel bad though. And don't want people to think that I am saying that whatever they are saying is bad or anything...

Anyways, I guess I'll take back my apology...;-D

Okay. Last thing: there is no s at the end of anyway. You could look it up.

I understand it isn't proper English, but it's kind of a personal quirk, in how I say and write it.