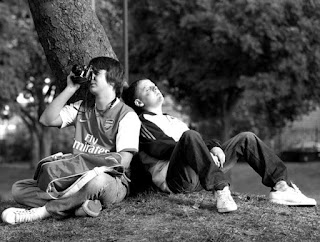 It's easier to tell a story about a punch in the nose than to tell one about picking daisies.

Visual media like films rely on dramatic images. Aliens, gangsters, robots, cops & robbers and their actions are just the stuff for movies. Not much of a story required at all if you've got gunfire, pyrotechnics or spaceships. Never mind that sensational images, particularly of the special effect variety, often detract rather than enhance story telling, the point is that's just plain easier to engage audiences when you've got explosions rather than exposition.

Of course love stories are dramatic too. Ninety nine per cent of your audience can relate to the joys and anguish of romance and if you've got a handsome couple and vibrant musical score you're halfway home.

Now try telling the story of two relatively ordinary teenage blokes. Let's set the tale in a working class London neighborhood. One lad is a Polish immigrant the other a runaway from his dreary Midlands home. Let's go further and say you've got the cheek to film it in black and white and want to wrap the whole story up in 72 minutes. You must be daft.

Or you could be Shane Meadows.

The film in question is Somers Town (2008) which arrived here in the colonies just last month. It's wonderful.

While we do get a glimpse of a brief beating suffered by one of the film's protagonists, Somers Town is otherwise bereft of violence. Both teens have a massive and quite understandable crush on a French waitress, but this is no love story. Meadows, who's previous efforts include Once Upon a Time in the Midlands (2002) and the terrific This is England (2006), manages to not only hold our attention for the full running time, and has us wishing for much more. In fact my only serious quibble with Somers Town is that its too damn short.
The two teens (played by Warsaw native Piotr Jagiello and Thomas Turgoose who starred in This is England) form a bit of cinematic cliche: the unlikely pairing. Their comradeship works because the two lads clearly need each other. One is lonely, the other desperate. Their escapades are not the madcap antics of teen exploitation films. Meadows does not draw our attention through shocks or broad laughs. He does it the old fashioned (and harder) way: relying on the strength of his characters and a strong story.
The immigrant is struggling to learn English and live with just his dad. The runaway is trying to make do day by day completely away from whatever family he left. We don't know the back story of either young man. Do you know the back story of everyone you have interactions with? Workmates, neighbors, causal friends? Course not, but we make do, just as the film does. It reveals enough and let's us discern in our own way what we want. Minus those explosions of other films we are left to imagine. Meadows is the type of film maker who trusts his audience to think for themselves.
A story grounded in reality with well drawn characters is not the stuff of box office gold. But for me it creates a perfect equipoise for my lingering and heartfelt love for Inglourious Basterds. The two films, as similar as broccoli to a root beer float, together reveal that good cinema comes in many forms.
Sadly, Somers Town is the type of film that will not play to huge audiences. It slipped into Northern California without the slightest ballyhoo and I only discovered it by accident (saw a postcard for the film with a character wearing an Arsenal jersey, my favorite footie club, and was initially intrigued just by that association). I could now reprise my quixotic fight against blockbusters and in support of independent films, but in the spirit of the film I'll keep this post short and simple.
Like this.
Posted by Richard Hourula at 3:46 PM