Ernest Hemingway Just Visited Me and So I Wrote About it 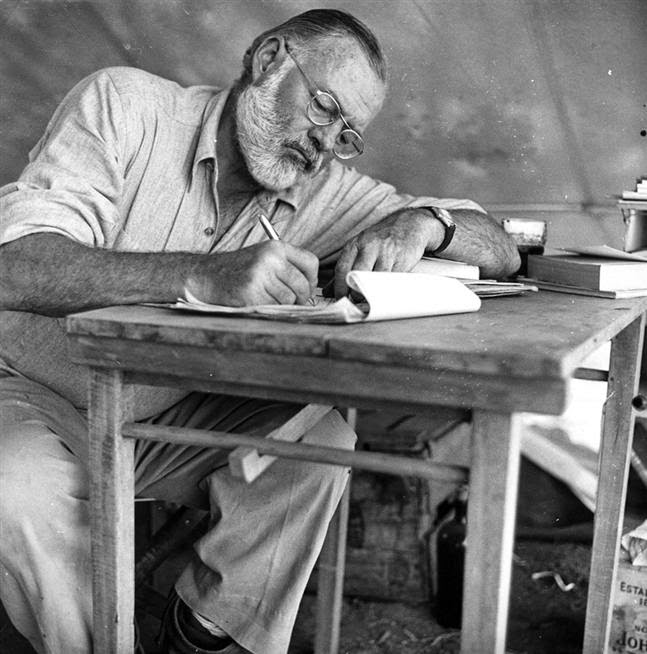 Ernest Hemingway sat down next to me while I was watching a movie on my laptop. Just now. There was no other chair in the room but he sat just the same. He patted me on the back. He had a large toothless smile. He was wearing an olive green jacket and dungarees. The shirt was checkered.

I wonder now why Ernest Hemingway came into my room and sat next to me. I haven’t read anything by him lately. Recently when I had trouble sleeping I thought of what my 25 favorite novels are and none of us his were included although he is one of my favorite writers.

He’s still here by the way. Watching me type this. It’s okay. I’m not freaked out by it. I don’t feel compelled to offer him a drink. Oh he’s got a small cap on too. Ernest Hemingway seems shorter than I would have thought. But then again he’s long dead so there’s that. I hope he’s not bored. If he expects me to talk to him he’s got another thing coming. Well he just shook his head no. So I’m off the hook on that count.

I’ve had other famous writers pop in on me too. But this is a lot clearer than the others.

Watch while I type this: “Hello Ernest Hemingway. It’s so nice to have your spirit or whatever is visiting here in the room with me. I greatly admire your work. Not a fan of the hunting or the bull fighting but let’s let that pass. I hope you are enjoying being in whatever form you are in as you visit me here. And I want to thank you for acting as a muse for me here today. Is that what this is about? I was watching a movie instead of writing and maybe you were sent by the Great Dead Writers Guild to get me going.”

Ahh, he’s just nodded his head in the affirmative. So that is it. How nice of you. I also want to thank you, Ernest Hemingway, for not talking. Hearing someone who has been dead for over half century speaking to me would be upsetting. I should think so anyway. The presence is really effective enough. Hearing voice would be too close to psychosis. Don't need that.

I sense you're fading, Ernest Hemingway. Mission accomplished I suppose.

Goodness he sure seemed real. Well not like I could have touched him but like his presence was real.

Ernest Hemingway in my room. Imagine that.
Posted by Richard Hourula at 9:47 PM