Black Hole of Calcutta on Wheels, The Good Sweat, Melted into a Puddle of Eternal Ecstasy, Not Polite Enough, I'm a Happy Person, Missing Robin Williams

Good lord but it was a hot BART car made the worse because it was packed. A sardine can is roomy in comparison. Every now and again the AC in your BART car will not work. This is bad. Even if, like on that day, it was cool out.

An overweight hipster's backpack was hanging in my face. At least I had a seat. For many others this was the black hole of Calcutta on wheels and they were standing, clinging to a long metal bar for balance.

There was a young otherwise attractive woman with an ugly growth on her lip. Maybe she couldn't do anything about it but certainly the black polyester pants were under her control. Except for the driver's stop announcements it was desperately quiet in my car. As if we were all fellow survivors of a particularly difficult workday all too drained to utter a word. I thought about shouting out a request for a sing along. A proper knees up in mid commute. But on further reflection I opted to join in the dour silence. No one likes a smart ass anyway.

As I got off the train Crimson and Clover by Tommy James and the Shondells was playing on my iPod and I was digging it. I was strolling and sashaying and sauntering and moseying and meandering and strutting all the way to the gym. Sweat city for me. Don't know about y'all but I love to work up a shirt drenching sweat. I do not care for sweats induced by weather conditions and thankfully living in the air conditioner that is the Bay Area I generally avoid such sticky situations. But a good run and other aerobics that produce steady streams of perspiration are most welcome. The sauna that follows and invites still more sweating is also wonderful. Then a cool shower.

So at the gym where all went as planned. More sauntering strolling sashaying and the like. Walked by a little kids' park. There were two very young women perhaps in their late teens cavorting on a play structure. They were mocha colored speaking French wearing short dresses no shoes and were gorgeous. I imagined 16year old boys beholding the site of them. I would have melted into a puddle of eternal ecstasy. As a bit of an old codger I merely enjoyed the moment and went on my way.

You ever feel a person wasn't quite polite enough? On MUNI the other day a guy dropped a folded up stroller and it whacked me in the knee. He said, "sorry" but it was half hearted and perfunctory. It would have done if he bumped me with a pillow but for a whack on the knee I'm thinking a long drawn out "I'm so sorry" would be appropriate. One of those apologies where you begin to feel bad for the person apologizing and you finally respond with an "it's okay, really."  An hour later I'm nearing the gym and this woman walking in front of me gets her YMCA ID card out. As she does a five dollar bill floats out out of her purse and lands in front of me. I could have pocketed the fiver as easy as you please with no one the wiser but I did one of those "excuse me, excuse me," deals. When she turned I handed her the five saying it fell out of her purse. "Gosh, thanks," was her response. It was a thanks worthy of passing the salt, for retrieving a finn it was totally inadequate and made me think I was a sap for returning it. I'd have gone with a "oh, thank you, thank you very much that's so nice of you." What're ya gonna do?

Last week I got a response to a recent blog post in which some college tootsie rips me down one side and the up the other. She had the nerve to assail me for being angry, snarky and having a generally piss poor view of humanity. Surprised she left out my predilection for kitten torture. What I had done was poke a little fun at a small time business and its hokey marketing techniques. I DID NOT NAME THE BUSINESS. No harm done. What I like to do is express irritation outrage and annoyance on this blog. It gets it out of my system and makes me feel better and makes me a nicer member of the human race. Also some people may read such rantings and ravings and relate in some small way and thus themselves feel better. We do that. We complain and kvetch to one another because the whole shared experience makes us feel part of a whole rather than isolated lonely creatures. 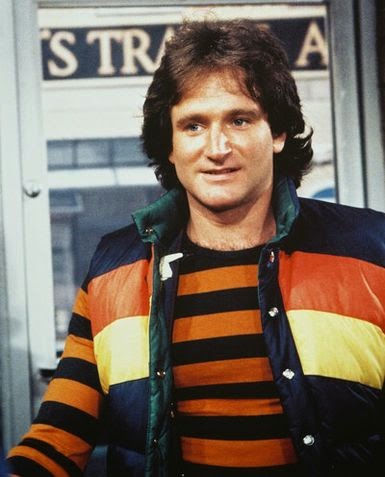 Also I am far from angry and my view of the world is remarkably positive considering I am an abuse survivor a former abuser of drugs and alcohol a rare sufferer of an acute panic disorder and have suffered the premature deaths of two close friends and a brother. Not to mention having taught middle school for 20 years. I wake up happy almost everyday and go to bed happy almost everyday and spend large portions in between happy. I think writing about things that annoy and outrage helps.

Life is okay. Trust me on this one.

Now if we could just get Robin Williams back. That whole deal stunk. Drug addiction and depression. I know from this stuff but Williams was clearly on a more intimate level with great waves of depression than I have ever been. Being driven to the point of suicide is beyond my understanding. I've followed, enjoyed and been inspired by Robin Williams since the days of Mork and Mindy. I even enjoyed his show on last season's TV schedule, The Crazy Ones, and was disappointed it wasn't picked up for another season. I wish Robin could be picked up for many more seasons on Earth. RIP.
Posted by Richard Hourula at 2:05 PM