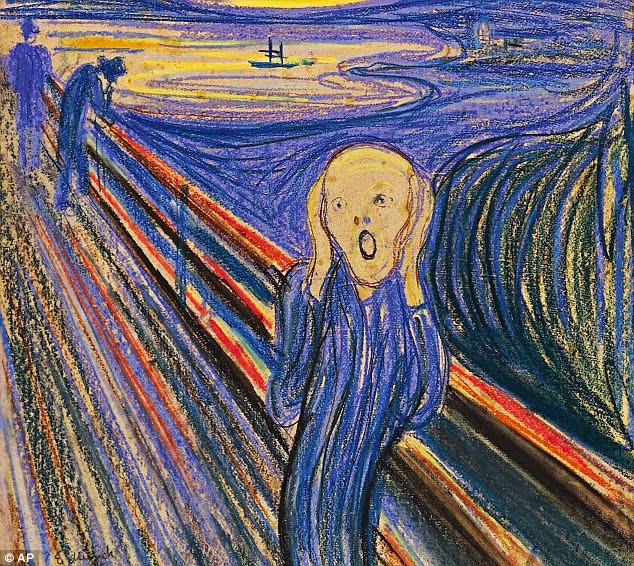 Creeps up on you then grabs you. Weird how you feel it in your feet and in your ass. Standing sitting and moving are not possible. Being conscious is horrific and you are wide awake as awake as you have ever been in your whole life and as you ever could be. Horribly awake and aware of everything every feeling every sound every thought every molecule and you hate it and it eats you. You don't exactly want to die although it would provide relief. Death seems so very remote because you are so attuned to everything but not in a good way. Like your brain is overloaded with sensations. It is a bombardment and oh it is awful.

You have just had a major league panic attack and in your mind it is never going away it is your permanent state of being for ever and ever.

These are the moments that define your madness. A horrible grip the tentacles of insanity choking the soul
out
of
your being.

As they say in the ads: but there's more. Other times there is: Anticipation. The sneaking creeping feeling that one is coming. Paranoia. Is this the start of another one? What's going on with me? Life in ruins don't know what to do next. Sit? Stand? Walk or pace or let the coming terror -- if it is coming -- over take me. And this thinking business. How exactly does it work? What should I be thinking about? What should I avoid thinking about? Calming thoughts would be good. If such a thing were possible. Mind is going this way and that and I don't feel I can control it and I guess I'd better take a pill. No no no don't want to become dependent. Don't want to be numb but also don't want the terror. Into your life it will creep. Starts when you're always afraid....

But one makes do and gets by and tries not to get high. There is no brain replacement. Shazam!

Sometimes across the street from where I catch the trolley on Market Street there stands an older African American woman wearing flamboyant clothes and hat. Often bright purple or shocking pink or deep green. She sings. Loudly. Hymns to Jesus. Her voice is grating. Powerful but unpleasant. Especially at 7:06 in the morning. When she is there I immediately turn to my iPod for protection. She's got the joy joy joy down in her heart and leans heavily on the everlasting light. And makes us poor saps who are minding our own business, just heading off to work, pay.

Speaking of obnoxious noises...There is a most odious chap who on occasion is on the trolley I board. He is a very large fellow in girth and height overweight but mostly just big. He can always be found sprawled in the very back of the trolley looking something like he's turned this public transport into his living room. He always -- and I mean without exception -- is on his cell phone having an extremely loud conversation. If I am at the front of the trolley I can still hear him quite clearly and woe be tide those sitting any closer. He is speaking in Spanish so I don't understand much of what he says, which is of little import in this case. Lest you think that my sufferance is purely individual, others are visibly annoyed and on more than one occasion a passenger has asked him to please be quieter. Dude needs to shut up.

There is also a woman who rides the trolley who is being beckoned by 1964. She is, I'm guessing, in her mid 60s and sports a perm very much like women wore 50 years ago. Her hair is a shiny wavy plastic white and is seemingly screwed to the top of her head. She wears make up aplenty including ruby red lipstick. Her attire is most proper as if going to Ernie's Restaurant where she will be in a scene from Vertigo. A martini then a steak and perhaps a slice of cake with coffee. I saw this woman and many like her when I was a small child. And here she is transplanted over a decade into the 21st century. She seems not at all confused by this. She sits primly with a black purse on her lap. No cell phone for this old dame. She's a caution I tell ya, a caution.

Posted by Richard Hourula at 4:41 PM