A Woman in Berlin, Telling Another Truth of the Second World War 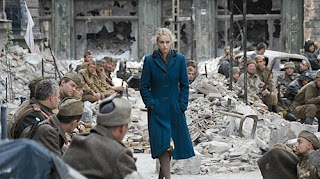 The American ethos about World War II is badly flawed. Most Yanks see the war as a victory of G.I. Joe over Nazi Germany and Imperial Japan. U.S. soldiers essentially being the cavalry that rode in and rescued England, France and China.

As much as it may pain us to admit it, the Soviet Union did far and away more fighting, dieing and winning than Americans ever conceived of. About half a million Americans died in the war, and that's a generous rounding off. Meanwhile 20 million Russians died. Linked to this is the myth that the Americans could have and should have "finished the job" by marching on to Moscow and putting the Commies and the Red Army in its place. In a pig's eye. The U.S. Army would have been crushed.

There are also myths surrounding resistance in occupied European countries. Fact is, there wasn't a lot of it, least of all in France. Vanquished citizenry pretty much took their licking. The Warsaw Uprising an obvious exception but an exception nonetheless.

The success of the D-Day invasion, so mythologized in this country, was certainly an important moment in the war but pales in comparison to Soviet victories at Stalingrad and Kursk.

Then there's bit of business with fire bombing German cities, notably Dresden. It ultimately did little to bring the war to an end but did a lot to incinerate Germans, women, children and the elderly largely among them.

The whole business of liberation has been misrepresented as well. Many allied troops acted more as occupiers than liberators though they did often take liberty with the locals and their goods.

None of this is meant to diminish the importance of the allied victory or the bravery and ingenuity of American and British troops. But it is always better to live in the real world than a mythic one.

One of those myths is of triumphant Red Army marching through Eastern Germany and valiantly taking Berlin, eventually linking with U.S. and British troops. Okay that's all technically true it just ignores the manner of their victory tour. The Russians raped and pillaged their way to and in Berlin. They were a marauding army of looters and indiscriminate killers committing mass rapes at virtually every turn.

The German film, Eine Frau in Berlin (In English: A Woman in Berlin), recently released on DVD in the States serves as a bit of corrective to this.

It is based on the anonymously written memoir of a woman who was in Berlin when the city fell in the Spring of 1945. Her book was published in the late 1950s and was blasted by Germans and Russians alike for its unflinching look at defiled German womanhood and depraved Soviet troops. The truth, as Al Gore put it, can be most inconvenient. The author (whose name has never been made public) pulled the book from the shelves with the proviso it not be re-released until after her death.

The heroine claims to be a journalist fluent or conversant in a number of languages (fortunately for her one of these is Russian) who has lived and worked abroad. She was also an unabashed Nazi. I found it refreshing that she felt no need to cover up her love for the Fuhrer and his cause, hopefully she came to see the horrible error of her ways in later years. She has a lover, Gerd, serving in the German army.

A Woman in Berlin is an unsparing look at the horrors visited upon all citizens of Berlin with the arrival of the Red Army. Women, of course suffered most of all. In the film we see one woman ask another simply "how many?" They both now the question refers to the number of rapes suffered.

Our anonymous woman decides that it is futile to fight the inevitable. Being young enough and attractive enough she can make a bargain with herself, her conscience, her soul. She cannot decide not to be used sexually but she can have a voice in dictating some terms. She decides to seek an officer. The experience will somehow be "cleaner" and she can make the relationship exclusive and have a protector in the bargain. It is an unimaginable choice for a woman to have to make. We often cannot control what happens to us in life, but we can control how we react to it. She's in control.

Meanwhile the film shows the rubble that was the physical Berlin and the further devastation to its people. The Red Army had been fighting for four years in some of the most horrific battles and conditions ever experienced. Many of them bore the stains of what the Germans had wrought in their own campaign through Mother Russia. One soldier in the film angrily recalls watching the children of his village violently murdered by Nazis.
There is no gussying up such a story. No gloss or sheen can make the Soviet taking of Berlin anything less than a look at the ugliest in human nature. But neither can such a story be bereft of any hope or humanity lest it be to repellent to occupy the narrative form. Endless bloodshed and sexual violation does not a story make.

A Woman in Berlin finds its beating heart mostly through the title character and the inner strength that radiates from within her. It is not merely self preservation either. Her glory comes from helping those around her. Acts of kindness both small and significant mark her as a special person.

Her relationship with a Soviet Major is fascinating. What have they found in one another? Solace? Love? Who is being protected? Through all manner of soul crushing depredation, people have found not just comfort, but spiritual nourishment in the arms of another. This is one example. It's not always easy to know what to make of the relationship between anonymous and her officer, but it is easy to imagine their lives without it.

The film is also peopled with memorable characters both German and Soviet who variably make us twinge or smile. There is a stone faced Mongolian soldier, a defiant and achingly young German soldier, a wizened German grandmother and a heart broken husband who cannot endure his wife's shame.

Nina Hoss stars as the woman and gives a remarkable performance. The director, Max Faberbock deserves kudos as well.

A Woman in Berlin is not a film you'd take someone to on your first date and I'd not recommend it for any wee ones in the house. But it is an important film for the manner in which it shines a light on one of the ugly realities of WWII that most people didn't even realize was right there under the rug where it had been swept so many years ago. And at last a look at how women suffered in the war and not just the dreaded news that a husband or son or father had died. World War II put everyone on the front lines in many places throughout the world. These were people without weapons, armed only with their wits. They fought too, never mind the odds they faced.

(As a bibliography for some of my assertions at the beginning of the post, I refer the reader to the following books: The War of the World by Niall Ferguson, No Simple Victory: World War II in Europe 1939-1945 by Norman Davies and The Bitter Road to Freedom: A New History of the Liberation of Europe by William I. Hitchcock.)
Posted by Richard Hourula at 7:01 AM