Il Mio Viaggio in Italia -or- My Journey Through Italian Cinema (Part One: Il Posto) 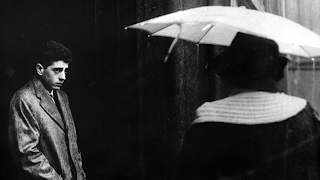 Sometimes why we do something is not nearly so important as what we get out of it. For example a high school student may do volunteer work solely to improve the look of a college application. But if that student in turn learns and grows from the experience and is of service to others, it's, as the kids would say, all good.

Over the next six weeks I'll be watching a lot of Italian films, many for the first time, and in conjunction with that writing a series, beginning right here, on some of the best of Italian cinema. Surely I'll enjoy both the films and writing about them and hopefully readers will thus be introduced to a film they've not previously enjoyed or gain new insight into an old favorite.
So never mind that the genesis of this series is to better be able to carry on a conversation with someone at Christmas. (I pause now while you say, "huh?"). As regular readers of this blog (both of us) may recall, my beloved oldest niece had a baby last month. The daughter was born in Italy and the father, Germano, is in fact a filmmaker (an Italian one at that). He and my niece will be in these parts with the baby next month and I reckon it a safe bet that I'll get to hobnob with the three visitors. I intend to be fully prepared for any conversation on film I may have with Germano. Oh sure I know my Fellini from my De Sica and my Antonioni from my Rossellini but I've got some blind spots and some brushing up to do. I've blathered on with him before on film, but briefly, so I'm boning up in case the poor bloke gets stuck in a lengthy conversation with me. Hence my tour through Italian cinema. Chide me for my motives all you want but the results should be molto buono. (With my luck he'll want to discuss American film!).
I start my series with a film I'd never seen until today Il Posto (1961)....
In A Tale of Two Cities, Charles Dickens wrote: A wonderful fact to reflect upon, that every human creature is constituted to be that profound secret and mystery to every other. A solemn consideration, when I enter a great city by night, that every one of those darkly clustered houses encloses its own secret; that every room in every one of them encloses its own secret; that every beating heart in the hundreds of thousands of breasts there, is, in some of its imaginings, a secret to the heart nearest it!

In that spirit director Ermanno Olmi's Il Posto takes a glimpse at a young man, Domenico Cantoni, starting a "job for life" with a Milan-based corporation. We also meet a few people with whom Cantoni's life intersects, including the man whose death opens a desk up for the young aspirant.
There is a wonderful simplicity and ordinariness to the story and espeically the main character. He is, like many protaganists in European films, quiet, reserved and persistent. Domenico is persistent in his pursuit of a heart breakingly beautiful young woman, Antoinetta (played by a first time actress who subsequently married Olmi and was never on screen again). He does not so much court her as make himself a presence wherever she is or may be. Domenico is much too shy to call or visit her but when he can manage to stumble onto Antoinetta's path he'll glady spring for coffee and hold up his end of any ensuing conversations. To see her, Domenico will stand in the rain or endure a tepid New Year's Eve party.
Il Posto asks nothing and everything of viewers. We may choose to accept what there is of the 93 minute film without embellishment. It is just what we see, nothing more. An earnest fellow starting a career for life with the attendant security and the total absence of glamour. The movie ends with the confirmation that our star is now a spoke in the wheel, desk bound for his remaining days.
But such a film as this also allows our imagination a free reign. Many, many questions are left unanswered, not the least of which is the fate of the two potential lovers. We may also ponder, should we choose, the deeper meanings of Olmi's story. He had previously made several documentaries, some about building projects that focused on the builder rather than the building. Surely this was the theme of Il Posto.
Films are about choices. Where does the director focus his camera? What aspects of the story does he tell? Who does he draw our attention to? One can have a lengthy and interesting discussion on Olmi's choices, particularly some of his surprising edits in Il Posto.
Olmi claimed in an interview that this film was not from the neo realism school that had swept through Italy after World War II. He said that neo realism put actors in real places in realistic situations. Il Posto did not utilize professional actors. He wanted people who were familiar with the situations and settings shown in the film so that they would not have to act, so that all actions would be natural to them. It paid off. One might be tempted to speak of a documentary feeling to Il Posto. One would be wrong. We know we're watching a drama (one chock full of light moments) but all the performers seem so natural in their roles, so unaffected, that it is with great ease that we lose ourselves in this simple story.
A professor of mine once said that there is beauty in simplicity. Il Posto is an example.
Posted by Richard Hourula at 8:39 AM

This sounds really interesting! I haven't seen too much of Italian cinema myself so I'm looking forward to seeing which films you recommend :)