Il Mio Viaggio in Italia -or- My Journey Through Italian Cinema (Part Two: I Vitelloni) 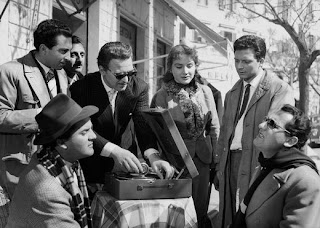 A group of guys.
Three or more fellows who hang out regularly. Known each other for years. Share their secrets, their fears, their hopes. One chap, why he's the intellectual in the group, another is the ladies man, one may be a brooder, one constantly flirts with trouble. In other words, they all have their modus operandi.
Movies have enjoyed stories about groups of guys. Whether kids as in Stand By Me (1986), mobsters as in Mean Streets (1973), or regular blokes like in Diner (1982).
In the nascent stage of his directorial career, Federico Fellini made a semi autobiographical film about a group of guys, I vitelloni (1953). While a fine film in its own right, to me its more a precursor of what was to come from Fellini. It lacks the verve and the daring of Amarcord (1973), for example, another movie based in a small Italian coastal city. Fellini was just warming up in the early Fifties, but doing so with movies that would make most directors envious.
Like most films about a circle of friends, I vitelloni focuses on one member of the assemblage. In this case it is Fausto, the one who gets married early on in the picture and not incidentally, the one who is a complete and utter cad. Here Fellini departs from the standard buddies picture by spending so much of the film on the shenanigans of one character giving very little screen time to most of the crew. This is by no means a complaint, merely an observation and after all, Fellini is quite unlike your garden variety director.
The friends long to leave their insular community, hoping to spread their wings in the big city, Milan or Rome. One can guess how this works out. Only the playwright, Leopoldo (the group's intellectual we are told in the beginning of the film) has a real chance. It is axiomatic that small town guys have out sized dreams and rarely the wherewithal or moxie to make them happen.
But Fellini does not seek to belittle the big dreamers, indeed he makes no judgement on the philandering Fausto who goes so far as to make a pass at his bosses' wife. Fellini is showing not telling. He lets the audience make their own judgments and guess at the fates of the gang.
There are some trademark Fellini scenes and moments in I vitteloni. An eccentric dance; colorfully idiosyncratic, whimsical and downright loony townspeople; drunken costumed revelry; and fountains, you must have scenes around fountains.
I vitelloni works best as character studies. This is especially true of the aforementioned Fausto and Leopoldo and Moraldo (the youngest of the group) who supposedly represents Fellini. Not surprisingly he is the most sane and sober of the lot. While others talk the talk, he prepares to walk it.
While the movie focuses on a group of guys, Fellini's films, and this is no exception, are very kind to, indeed celebrate women. Fellini's women are either beautiful, wise, tough as nails or a combination thereof. A lesser director, a lesser man, would have used women as props in such a film as this. Sex objects, nags or loving but vacuous mothers. Not Fellini. His love of women shines throughout this and his other films.
This is most certainly a forerunner of even more Felliniesque films to come. There is that wonderful and very real combination of the bizarre and the common in both people and events. Evidently some rate the film on a par with or even higher than the great director's better known works. Though I beg to differ with such lofty sentiments about I vitelloni, it is a film I'll gladly visit again (last night was my first viewing). Fellini's movies all get better with repeat viewings. I could easily watch it without sound just to better enjoy the stunning look of it. I'd also like to get better acquainted with the gang. Hey, I wanna hang out with em too.
Posted by Richard Hourula at 9:51 AM