You Can Say That Again. Twenty of My Favorite Lines From Films 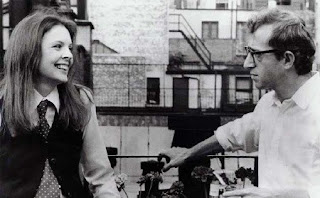 Movies are memorable for a variety of reasons. Images. Scenes. Surprises. Special effects. Dialogue. Performances. And, of course, great lines. Like anything else with films its up to us to decide what is a "great" line. Simply put it's one that resonates. Hearing or even reading just that line can evoke the entire film or at least a scene or a character.

I offer now 20 of my favorites. All of these lines have stuck with me in one way or the other over the years (or in one case the months). Each one is from a favorite film. Some are comedies and some decidedly not. Some are famous. Others not. I noticed half way through that almost all were spoken by men. So I decided to that this list would be comprised solely of lines from male actors. I'll post a list of women's lines later.
The great thing about most of these lines is that they don't require context. In some cases you don't even need to have seen the film to appreciate the line. Some are hilarious, others poignant. Another thing they have in common is that they were spoken by memorable characters, or at the very least ones that were integral to the film.
They are in no particular order except my all time favorite is first and I've bookended them with lines from the same actor. Enjoy and feel free to leave one of your own faves in the comment section.
Nobody calls a Firefly an upstart! - Groucho Marx as Rufus T. Firefly in Duck Soup (1933).
Positively the same dame. - William Demarest as in The Lady Eve (1941).
You think I'm licked. You all think I'm licked. Well, I'm not licked. And I'm going to stay right here and fight for this lost cause. Even if the room gets filled with lies like these, and the Taylors and all their armies come marching into this place. - James Stewart as Jefferson Smith in Mr. Smith Goes to Washington (1939).


The cities are full of women, middle-aged widows, husbands, dead, husbands who've spent their lives making fortunes, working and working. And then they die and leave their money to their wives, their silly wives. And what do the wives do, these useless women? You see them in the hotels, the best hotels, every day by the thousands, drinking the money, eating the money, losing the money at bridge, playing all day and all night, smelling of money, proud of their jewelry but of nothing else, horrible, faded, fat, greedy women... Are they human or are they fat, wheezing animals, hmm? And what happens to animals when they get too fat and too old? - Joseph Cotton as Charlie Oakley in Shadow of Doubt (1943).
Cut it out! Cut it out! Cut it out! The hell's the matter with you? Stupid! We're all very different people. We're not Watusi. We're not Spartans. We're Americans, with a capital 'A', huh? You know what that means? Do ya? That means that our forefathers were kicked out of every decent country in the world. We are the wretched refuse. We're the underdog. We're mutts! Here's proof: his nose is cold! But there's no animal that's more faithful, that's more loyal, more lovable than the mutt. - Bill Murray as John Winger in Stripes (1981).
You mean, let me understand this cause, ya know maybe it's me, I'm a little f*cked up maybe, but I'm funny how, I mean funny like I'm a clown, I amuse you? I make you laugh, I'm here to f*ckin' amuse you? What do you mean funny, funny how? How am I funny? - Joe Pesci as Tommy DeVito in Goodfellas (1990).

I'm not sentimental about war. I see nothing noble in widows. - James Garner as Charley Madison in The Americanization of Emily (1964).

There's a lot to be said for making people laugh. Did you know that that's all some people have? It isn't much, but it's better than nothing in this cockeyed caravan. - Joel McCrea as John L. Sullivan in Sullivan's Travels (1941).
Hey, don't knock masturbation! It's sex with someone I love. - Woody Allen as Alvy Singer in Annie Hall (1977) (pictured above).
She tried to sit in my lap while I was standing up. - Humphrey Bogart as Philip Marlowe in The Big Sleep (1946).
Relax, all right? Don't try to strike everybody out. Strikeouts are boring! Besides that, they're fascist. Throw some ground balls - it's more democratic. - Kevin Costner as Crash Davis in Bull Durham (1988).
What's the most you ever lost on a coin toss? - Javier Bardem as Anton Chigurh in No Country For Old Men (2007).
When I find myself in a position like this, I ask myself what would General Motors do? And then I do the opposite! - Cary Grant as Johnny Case in Holiday (1938).
They probably sit around on the floor with wine and cheese, and mispronounce allegorical and didacticism. - Woody Allen as Isaac Davis in Manhattan (1979).
You probably heard we ain't in the prisoner-takin' business; we in the killin' Nazi business. And cousin, Business is a-boomin'. - Brad Pitt as Lt. Aldo Raine in Inglourious Basterds (2009).
Let's go. - William Holden as Pike Bishop in The Wild Bunch (1969).
What are you gonna do? Nice college boy, didn't want to get mixed up in the family business. Now you want to gun down a police captain. Why? Because he slapped you in the face a little? What do you think this like the Army where you can shoot 'em from a mile away? No you gotta get up like this and, badda-bing, you blow their brains all over your nice Ivy League suit. - James Caan as Sonny Corleone in The Godfather (1972).
Besides, your hands ain't so clean. You killed and liked it. You didn't get them medals for holding hands with them Germans. - James Cagney as Tom Powers in The Public Enemy (1931).
The poor dope - he always wanted a pool. Well, in the end, he got himself a pool. - William Holden as Joe Gillis in Sunset Blvd (1950).
I have here an accident policy that will absolutely protect you no matter what happens. If you lose a leg, we'll help you look for it. - Groucho Marx as Otis B. Driftwood in A Night at the Opera. (1935).
Posted by Richard Hourula at 8:41 PM

Loved the Cary Grant quote, although I fear it's only because of Cary Grant. Though I love Kate, Cary, George and Phillip [I think he wrote the play]. I don't Holiday, the play or the movie.