And Now for Something Completely Different... Another Shameless Attempt to Draw Comments 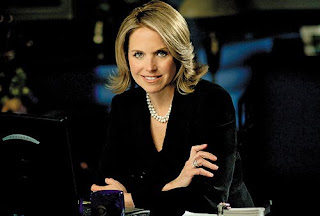 Regular readers of this blog (both of us) may recall that two months ago I wrote a post designed solely to solicit comments (think of it as my "I will not be ignored" post). Having had some recent posts met with resounding silence I again attempt to draw fire simply through the act of speaking my mind. Please remember that if you find any of these opinions at all objectionable the expectation is that you will leave a comment. I can then resume regular film blogging, to every one's obvious relief. Here we go....

I believe that the best form of government is mob rule.

Film blogging should be government subsidized.

Everyone should have hemorrhoids, no exceptions.

Civil War re-enactors should be forced to use live ammo.

I do not now nor have I ever believed that you do the hokey pokey and that's what its all about.

The letter "w" is stuck up and needs to be put in its palce.

Dude, it is so totally obvious that Katie Couric (photo above) is a transvestite.

That stuff in in the Bible about Jonah is a whale of a story.

In order to be promoted from the first grade, children should have to eviscerate a live rabbit.

Film prices are too low and audiences too quiet. Let's see ticket costs doubled and make some noise people.

I think Fox News deserves a lot of credit for hiring the mentally challenged to serve as commentators.

There's nothing wrong with America that can't be fixed by investing in pelicans.

Jean Harlow and Hattie McDaniel were totally the same person.

Let's try slavery again only this time with Canadians.

(Anyone leaving a comment will have $100 donated in her or his name to the Film Bloggers Retirement Foundation.)
Posted by Richard Hourula at 7:58 PM

I've always been more of a lurker than a commenter but here goes:

"q" is WAY more stuck up than "w." I mean it almost always needs "u" around to support it in a word or else it won't deign to appear.

I have to agree about giving Fox News some credit.

I also think the Canadian slavery thing could work-I mean everyone knows the Canadians are super nice so they probably wouldn't even complain or put up a fight.

Not entirely related but I think I will be having a Jean Harlow mini-marathon on Sunday, which will give me a chance to finally see Bombshell!

I think this post demonstrates your regretable disconnection with reality, and the shameless manner in which you exploit...

Except the part about blogging being government subsidized. Obviously I agree. But that is a minor point in the foolish and hateful diatribe you constantly...

I will, however reluctantly admit that your point about Civil War reeinactors using live ammo has some merit. I have often felt they were hypocritical not to. And that business about the hokey pokey, well, I always thought that was an old wives' tale.

But there is so much more upon which we disagree and I can't tell you how much you disgust me as a human being, who takes his position as a blogger and ...

All right, taking your point about the letter "W" in good part. It's true, it does need to be taken down a peg. And Fox News is to be lauded for giving those poor unfortunates a livelihood. I agree that charity must be praised.

However, you have clearly gone too far this time. Except for that bit about the pelicans. I myself have quietly ruminated on such a scheme, and have even made notes on a napkin.

Oh. My. Word. I had no idea Jean Harlow and Hattie McDaniel were the same person! And here I've been watching their films for years! But it's posted on a blog, so it must be true! Oh, my. I'm really shaken by this.

Ye GADS man! You're a genius!

“I believe that the best form of government is mob rule.”

Rio Bravo 2: Sheriff John Wayne, with deputies Dude and Stumpy, step out of Congress to break up the mob. Mob kills them.

“Dude, it is so totally obvious that Katie Couric (photo above) is a transvestite.”

“I think Fox News deserves a lot of credit for hiring the mentally challenged to serve as commentators.”

Network has come true. BTW - Forrest Gump is organizing a protest march against you for lumping him in with Glenn “Hemorrhoid” Beck & Company. Lawsuit may follow.