One Year of a Pandemic, Not So Happy Anniversary 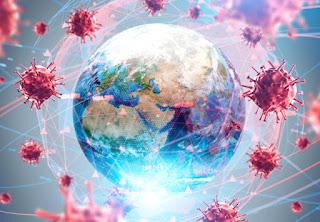 One year ago today I taught a class live and in person.

One year ago today I went to the gym.

I have not taught a class live and in person since.

I have not gone to the gym since.

Nor have I dined in a restaurant, visited a museum, gone to a sports event, attended a party or traveled out of state.

I have completed and published a novel, finished the first draft of another and began work on a third. I have also written 122 blog posts. This will make it 123.

I have watched somewhere between 350 and 400 films (probably closer to the latter). I've read in the neighborhood of forty to fifty books and parts of a dozen or so others.

I'm proud to say that I've barely watched any more television than I did in the previous non pandemic twelve months.

I've also actually worked out more as I've gone from every other day to six days a week. These workouts are at home and do not include a cardio component other than three sets of jumping jacks and a minute of running in place. I have however -- usually with my darling wife -- taken many a walk.

The aforementioned better half and I have gotten along just fine despite the close quarters and being together very nearly twenty-four/seven. A successful marriage!

We took up Yahtzee! in the early autumn and play almost every day. Not the least bit ashamed to admit it. We've also resumed home delivery of the New York Times so I'm back to doing the crossword puzzle and after nine years have picked up were I left off (though I rarely tackle the Saturday puzzle). I also make a daily visit to Sporcle and if you've never been there I recommend it.

Depression still dogs me. When the pandemic hit the six-month mark it was pretty bad but for the most part it's been as before -- no better, no worse.

I've watched many, many hours of proper football (soccer to you Yanks). Ninety per cent of what I watch is from England's Premier League, the rest is European competition involving national teams or clubs from different countries. I've only watched parts of four American football games, a few innings here and there of baseball and nothing else in the way of sports.

I've continued to follow the news closely and it has been much more pleasant to do so since January 20th. The combination of the past president and pandemic was quite awful. While much of the news is still depressing, there is at least cause for hope that the bright light at the end of the tunnel is not an uncoming train but the end of the pandemic. The president said family gatherings by Independence Day. Meanwhile the plan is to open the school where I teach in June.

I have been vaccinated. Got the second shot last Saturday.

So as twelve month periods go it's been a real stinker but I'm proud to say I've made the most of it, especially in terms of my writing. It came at a good time in my life. Had something like this happened when I was a swinging single...well, perish the thought.

Perhaps the worst part of the pandemic has been not being able to see my youngest daughter in all of 2020 (she's in New York). We last said good-bye on December 31, 2019. Seems a century ago. Fortunately we live in an age of instant communication including zoom. Also oldest daughter has been around. If both were our of reach...Again, perish the thought.

The last pandemic approaching this magnitude was just over 100 years ago so one hopes the next one is also 100 years or more away. Then again I've read that we could be visited by such a horror any time. One can't predict. I choose not to contemplate that now.

Posted by Richard Hourula at 7:17 PM