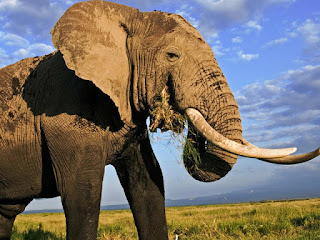 Everyday on page two of the New York Times there appears a feature called “A Headline in History.” It offers a headline from a past edition of the Times with a brief summary of the story, sometimes with follow-up information. I found Monday’s “Headline in History” to be particularly interesting. A slightly edited version follows.

From April 26, 1901. Big Charley, an elephant weighing over three tons was bathing in a river in Peru, Indiana when he attacked his trainer, Henry Huffman. First, he wrapped his trunk around Huffman and tossed him into the water. The trainer emerged, approached the pachyderm and said, “Why, Charles, I did not think that of you you, aren’t you ashamed of yourself?” The elephant responded by once again grabbing Huffman, then holding him down on the bottom of the river. Men fired rifles at Big Charley to no avail, even shooting strychnine-laced apples. He eventually ate one of the apples and an hour later lay down in agony. “A rifle shot settled him down.”

However, according to the website, Roadside America, Charley had bashed Huffman’s head against rocks before drowning him.The website further claimed that Huffman had been the only person who had any control over the elephant. The trainer had been unable to take Big Charley for a bath during the previous three weeks due to either an injury or an illness and the elephant presumably was angry at Huffman for the neglect.

In an issue a few weeks after the tragedy, the Marion Star published a different account of the events. In it they quoted the circus’ press agent, Harry Hardy (the second HH involved in this story). By his telling Big Charley threw Huffman “fully fifty feet” into the bushes. As the elephant approached him Huffman exclaimed, “Charlie, do you want to kill me? Why do you treat me like this? Come back, I won’t hurt you.” Big Charley then took hold of Huffman again and plunged into the river and held his trainer under the water until he drowned. “Lifting the lifeless keeper out of the water, the elephant looked at him to see whether he was alive or dead. Apparently satisfied with his work, the brute then threw his dead keeper into mid-stream.” After which he took his bath, as usual. According to this account, farmers with shotgun were recruited to slay the animal, though again death resulted from a strychnine-laced apple. An almost identical account to this one appears in the Indianapolis Journal a few days after Huffman’s death.

The Star and Journal accounts would seem to be more reliable as they appeared within days of the incident and quote a source.

Huffman was neither the first nor last wild animal trainer to be killed by his charge. Today many people are more sensitive to the plight of animals and sympathize with them. I join those who feel that wild animals should, with rare exceptions, be left to the wild where they belong and are happiest. I do not feel that the trainer, as some might say, got his comeuppance. The punishment, the loss of life itself, outweighs the crime. This is certainly true in an eye-for-an-eye sense.

Besides the different versions of the story that I found, I was most struck by the horrible manner of Huffman’s death. Drowning has to be horrible way to go and to know in your dying moments that an animal you trusted is killing, would make it all the worse. Big Charley was killed in retaliation. There’s no way he could have escaped such punishment in those days, nor likely would today. It would have been better for all concerned if Big Charley had been able to live out his life in the wild where he belonged.

I’ve noticed in the past eighteen months how differently people respond when you tell them either that you’ve written a novel or are working on one. Of course most folks are positive and supportive and congratulate you or ask what the book is about. However some people — for reasons I can’t quite fathom — don’t want to know. I had a friend (since deceased) who literally would say nothing if I mentioned my novel or the writing that was keeping me busy. I’m not exaggerating, he’d say not a word. After a long ensuing silence I might bring up another topic or he might. An ex-colleague of mine who I'd been regularly emailing with, has not responded since I told him that my first book had been published. That was over a year ago. I’m dead to him because I wrote a book? Other people will give you a quick perfunctory response but betray no curiosity. It’s as if some people are embarrassed that they know someone who’s written a book. Last weekend I was out for a stroll when I came across another former colleague. In the course of our conversation I mentioned my second book being published. I said it was about Finnish-American reporter in Berkeley in 1941 who uncovers a Nazi spy ring. He had the gall to ask, “wouldn’t the reporter, being Finnish, be sympathetic to the Nazis?” I politely said that such a contention was ridiculous. Finland was at war with the USSR and then the Nazis invaded and Finland was in an the-enemy-of-my-enemy-is-my-friend situation. There were virtually no Nazi Finns and indeed many more Communist Finns. Meanwhile Finns in America were mostly Democrats and certainly not Nazi sympathizers. My one-time co-worker asked nothing else about my book. He was clearly trying to undermine my entire work. (I should here add that this is the same person who once publicly insulted me and by way of apology left me a note that begin, “I’m sorry if I hurt your feelings but…” A note rather than in-person apology, the IF I hurt you and then the excuse. I knew then he was not a man of character.)

I do not tell people about my writings to brag, or to try to get them to read it or to even suggest that I’m this century’s Charles Dickens. All I really expect is for a person to practice social niceties as they normally would. I hasten to add that I do not seek people to tell about my books. It is always people I know and it is usually a way of updating them on my doings. It seems a natural thing to tell people what you've been up to. I should also reiterate that most people are nice about it. I do wonder about the others.

Posted by Richard Hourula at 11:58 AM