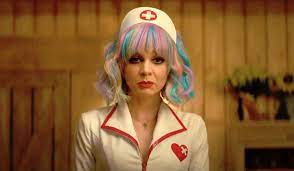 Promising Young Woman (2020) Fennell. Every male between eighteen and eighty should see this movie. There's a message there that needs to be understood. Now. PYW boasts a clever screenplay, but more importantly one that has a powerful message to convey. Happily this message is heavy-handed (as it needs to be) but deftly done nonetheless. Hats off to writer/director Emerald Fennell. Carey Mulligan stars and what a wonderful career she is having. Ms. Mulligan has been appearing in a variety of different films and has made them all better. PYW is about….Hmm, that’s not an easy one, it would be a simple matter to offer a plot summary. But it’s not an easy plot to summarize without giving away certain elements that are best discovered by the viewer. Perhaps better to mention the themes, specifically date rape. More specifically those odious men (and they comprise a significant portion of the adult male population) who take advantage of intoxicated women, sometimes themselves fueling that intoxication. Mulligan’s character is out for revenge, for both the general problem and for a specific incident. The rest is for you to discover. PYW is an important film both for its message and how damn effective it is at conveying that message. I’m surprised and delighted that the Motion Picture Academy nominated it for best picture.

Pulp Fiction (1994) Tarantino. I remember well what a thrill it was to see Pulp Fiction in a theater shortly after it came out. The sheer inventiveness of the story-telling along with audacious scenarios, bravura performances and a letter perfect soundtrack made Pulp Fiction the type of film that stayed with you for days. That fresh luster has worn off but only a bit. Tarantino’s first masterpiece (I would include Jackie Brown (1997), Inglorious Basterds (2009) and Once Upon a Time in Hollywood (2019) as his others) is still thoroughly entertaining. As in his other great films, it is Tarantino the screenwriter as much as Tarantino the director who is the real hero. He is a master of dialogue, creating characters and developing scenes for those characters to really come to life. It's a film that has not aged a day in over twenty-five years and likely won't for another twenty-five. For me the scenes between John Travolta and Samuel Jackson are the highlights, but it is such a rich film with so much to choose from.

The Milky Way (1936) McCarey. This was the first time I can remember seeing Harold Lloyd -- great comedian of silent films -- in a talkie, though I know he made several. Here Lloyd plays a milquetoast milk man who is mistakenly believed to have knocked out the middleweight boxing champion during an argument. He is set up with a series of fights in which his opponents take dives so he can get a title shot against the champ and said champion’s promoter, played by Adolphe Menjou, can clean up on side bets. It’s a workable premise and the writing, direction and cast all are fine and The Milky Way ends up being a nice way to wile away ninety minutes. Of course Lloyd has “a girl” and there a predicable plot twists and it all works out in the end. To the surprise of no one. Ably directed by Leo McCarey who knew his way around a comedy.

Wuthering Heights (1939) Wyler. I was greatly surprised at how bad a film this was. It’s a particular crime when you have the brilliant cinematography of Gregg Toland (earned him an Oscar) and the acting legend Laurence Olivier in the leading role. The biggest problem was Merle Oberon as Cathy. I’ll never understand how she became a star. As a bit player Oberon would do nicely but she was incapable of carrying a film and was not up to playing opposite Olivier with whom she had no on-screen chemistry (nor, evidently, any off the screen). Emily Bronte’s novel of the same name was butchered in order to fit the standard one hundred minute running time. I suppose the story could have been crammed into less than two hours, but director Willam Wyler and the writing team were not up to the task. I will mention a nice performance from Geraldine Page and bemoan the fact that the studio choose Oberon over Vivian Leigh. Talk about mistakes.

Flying Down to Rio (1933) Freeland. The first pairing of Fred Astaire and Ginger Rogers and the one that spawned their cinematic partnership. As with a lot of musical extravaganzas of its time, the plot is woefully thin, but there is entertainment aplenty mixed into the confusion. In addition to Astaire and Rogers tripping the light fantastic, there are scattered chuckles and the lovely Dolores Del Rio. The Mexican born actress plays a Brazilian without a Brazilian accent but if you’re looking for rigorous accuracy here it’ll be a futile search. The plot contrivances are silly but if you accept that and just enjoy the ride you’ll have a nice enough time. I did. Gene Raymond stars and he's a nice enough bloke and fine actor but better as the second fiddle.

Fight Club (1999) Fincher. It’s a film that not only doesn’t pull any punches, it throws a few haymakers in the bargain. (Pun not intended.) For that we are grateful to the source material, Chuck Palahniuk's novel of the same name, which is here faithfully adapted by director David Fincher. Fight Club was controversial at the time of its release and doubtless remains so today among a certain variety of fuddy duddy. It dares to explore certain dark sides of the male experience and does so with as much sentiment as a crocodile. There is a sixties rebel-against-authority vibe to Fight Club coupled with more modern sensibilities and a bit of nihilism. Edward Norton, Brad Pitt and Helena Bonham Carter are perfectly cast as the three leads. Fight Club is now twenty-two years old and like the aforementioned Pulp Fiction, hasn’t aged a day.

Minari(2020) Chung. Like Promising Young Woman I’m both surprised and delighted that this excellent film got an Oscar nod for best picture. It’s the type of movie the academy usually ignores. There are no big stars, no big name director, no character with a mental illness or drug addiction or who is famous. Minari is about a Korean-American family starting a farm in rural Arkansas in the 1980s. Not your usual Oscar fare. It is an earnest film that has a simple story (that addresses complex issues) with relatable problems and people. There is domestic discord, a small — often bratty — young boy with a heart problem and there is the vagaries of starting your own small farm with so many odds stacked against you. There are ample opportunities for cliches to come along and wreck the film, but these are avoided. Instead director Lee Isaac Chung opted for honesty. The story is based on his own experiences as the boy.

Posted by Richard Hourula at 9:33 AM