Quintuplets, Vengeance, Stuttering, Black Shirts & Murder -- Catching Up With Some of the Films I've Seen Lately

I've recently enjoyed that most treasured of all interludes, time off. Absent travel, the two best ways to occupy such time is with family or films. I've been lucky enough to do both. Details of conversations with nephews, children or others are not likely to interest the general reader, so I'll report instead on some of the films I've seen of late. 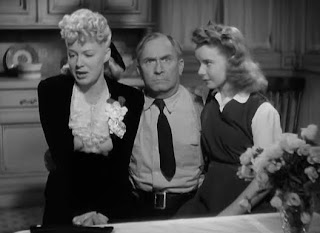 Holy Multiple Births! or The Miracle of Morgan's Creek (1944). These past three years I've listed this film from Preston Sturges as one of my favorite Christmas movies. Indeed I watch it almost every December. While I'm beginning to re-think Miracle as a Holiday flick, I am hardening my position that it is joy to behold. The real miracle, of course, is that Sturges slipped this by the censors who, in days of yore, cared not for pregnancy, pre-marital sex or women going unpunished for naughty behavior. The prudes! This is not Andy Hardy's small town USA. For one thing some of the characters are, well, real characters. No better example than the father of the bride, Constable Kockenlocker (William Demarest). He's a kick, which is appropriate to say because he's constantly trying to kick one of his daughter's in the fanny and in turn landing on his own. The older daughter Trudy is the blinkered, dizzy but lovable blonde who gets, "in a family way" under circumstances that only Sturges could create. Diana Lynn is an underrated delight as the wise cracking and wise beyond her years 14 year-old kid sister. The hapless wonder in the story is the lovelorn Norval Jones (Eddie Bracken) who'll go to any lengths for his beloved Trudy. Bumbling, stumbling and fumbling all the way, Norval is just a sweetie pie that anyone would root for. Like the other half dozen or so classics Sturges made in a period of under ten years (with nary a thing before or after to boast of) Miracle is witty, silly, improbable and utterly delightful. So maybe while it's not a true Christmas film, it is a true wonder. 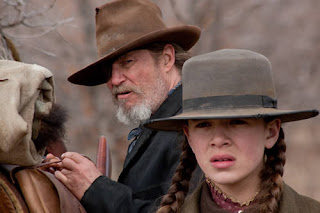 The Coen Brothers Go West or True Grit. I think it's safe to assert that, at least in this writer's humble opinion, the title of best working American director is a tie between Joel and Ethan Coen, who conveniently are brothers and work together. In recent years they've offered No Country for Old Men (2007), A Serious Man (2009) and now True Grit. Three films from radically different genres (and if you can figure out the genres of the former two, more power to ya). True Grit is a clearly a western. It's somewhat of a surprise that the Coens would make such a conventional film. It's no surprise that these fine craftsmen would do such a bang up job. This is not a re-make of the 1969 film of the same name which starred John Wayne. It is instead a more faithful telling of the novel of the same name penned by Charles Portis.  (As per custom, the Coens did their own adapting.) I'm not in a position to compare the two films as I never bothered with the first. Still, its impossible to imagine that John Wayne did more with the role of Rooster Cogburn than did Jeff Bridges. I've seen enough of Wayne to state with confidence that he couldn't have matched Bridges' spitting, muttering, cussing and quite obviously stinky interpretation of the lawman. Bridges was a positive wonder to watch. He was clearly having a rollicking good time in the role and inviting us to enjoy the journey with him. Meanwhile newcomer Hailee Steinfeld, a mere 13 years old during filming, is amazing as Mattie Ross. The phrase, she more than held her own, springs immediately to mind. Matt Damon, Josh Brolin and Barry Pepper are also along for the ride and contribute mightily to it. But it is the Coens who should earn the most encomiums. They re-created the proverbial Old West as well if not better than has been done before. If ever a film felt like it existed in the time period and place it depicted, this one did. 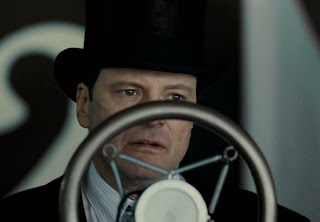 How Stuttering Can Be a Royal Pain or The King's Speech. They might as well hand the Best Actor Academy Award to Colin Forth now and dispense with the nominations. I'm not suggesting that he should win or for that matter that he shouldn't, just that he will. He was considered an unofficial runner up to the aforementioned Mr. Bridges last year and he gives a wonderful performance in a prestige film this year. The King's Speech is a classy production all the way. Then again so are those Masterpiece Theater production that PBS shows on Sunday nights. This film had all the emotional heft of one of those stagey-looking productions. One of the problems being the focus on a man's (yes, I know, he was the bloody King of England) speech impediment. For crying out loud this King assumed the throne when his brother abdicated to marry an American divorcée. Then there was the little business of World War II breaking out during his reign. Both these events are treated as sidebars in the story of the stubborn prince-cum-king learning to appreciate and profit from his unconventional tutor (Geoffrey Rush). The King's Speech looked damn nice and flowed along quite well with Firth's performance a real highlight.  But I could have seen the same quality on PBS and saved the $10. 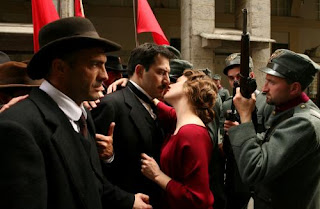 The Two Mrs. Mussolinis or Vincere (2009). Earlier this year this wonderful film from Italy snuck into a few theaters across America and then snuck right back out. Some of us were lucky enough to catch it. Happily it's now available on DVD and can be watched as part of Netflix's Instant program. Do yourself a favor and see it. It is the story of Ida Dasler who was almost certainly a mistress of Italian Dictator Benito Mussolini (before he assumed power) and claimed to be his first wife and mother to his son. Giovanna Mezzogiorno as Dasler gives one of those performances covering many years in the life of a historical figure that leaves one in awe (think Marion Cotillard in La Vie en Rose (2007)). She is lusty, tempestuous, beautiful and utterly mad. We in turn feel much of what she's going through. The first half of the film follows her with Mussolini as he rises from newspaper editor to Il Duce. It is rich, panoramic and blends historical footage with red hot sex and passions of all variety. Then as Mussolini must protect his legitimate relationship and secure his place in history, Ida is frozen from his life. As this is her story, we see no more of him (except in some more archival scenes) and the story slows considerably. It is now about a woman's hopeless efforts to claim the man she loves for her very own. Does she go mad or is this alleged insanity a means of "getting her out of the way?" In either case the focus has changed and some viewers have evidently felt cheated. But it is honest film making and still makes for compelling viewing. If Mezzogiorno isn't enough to hold your attention you weren't paying attention in the first place. 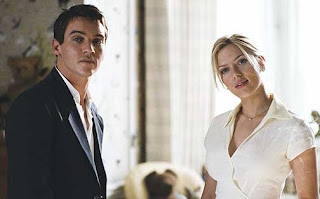 How to Murder Your Mistress or Match Point (2005). I've been on a Woody Allen kick for over a month that shows no signs of abating. This was my third viewing of Match Point and it is a classic example of a film that gets ever so much better with each viewing. The little details of "what happens" increasingly seem merely to serve the bigger questions the film asks and the manner in which the story is told. The idea of killing an inconvenient mistress was not new to Allen who'd explored it in Crimes and Misdemeanors (1989). However, Match Point does not presume to explore moral questions. We are simply watching a cold calculating young man, Chris (Jonathan Rhys Meyers) who's principally employed charm and grace to attain all of life's luxuries. If a murder is needed to protect all he's accumulated, so be it. He's results-oriented. Match Point is one of the many Allen films to ask serious questions about its characters and thus of its audience. It also ponders the imponderable role of luck in one's life, another occasional Allen theme. On the surface Match Point is a simple, elegant film about a man's rise and his use of the ultimate crime in the service of his success. But upon repeat viewings we see more subtlety in Chris and how he maneuvers. We also see, in sharper focus, the banality of his wife and her very well-to-do family and infuriating innocence and naiveté of his lover, (Scarlett Johansson). It's impossible to conceive a list of top ten Allen films which omits it.
Posted by Richard Hourula at 11:19 PM

"Miracle on Morgan's Creek" is a hilarious movie but also so ground breaking!

The Hays Code wasn't really allowed to show pregnant women, so to have a movie about a woman who is pregnant to a mysterious husband was so amazing! I think it was Eddie Bracken who said they only got away with it, because it was so funny.