Perfection and Sanity are Boring, Black Swan is Not 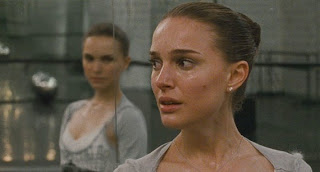 Tonight the University of Connecticut women's basketball team set a new record for consecutive wins. I find such perfection boring. Americans are supposed to love underdogs but at least in the world of sports, supposedly flawless teams and players are revered. When one commits an error they are said to be "only human." Humans, in all their imperfection are endlessly fascinating and entertaining. Winning every damn time is ho hum.

Sanity, while functional, is also quite tedious. The sober and sensible make for good accountants but not terribly interesting subjects of art. It is when the mind veers of course that the fun begins.

All of this brings me to Black Swan the new film from director Darren Aronofsky. The story centers around a ballet dancer, Nina Sayers (Natalie Portman) tapped for the lead in a new production of Swan Lake. I am going to go ahead and say that in this film viewers come to expect the unexpected and are never disappointed.

Nina is one of the best kind of film characters, the totally obsessed. Many an outstanding movie has featured a totally obsessed lead who either becomes blind to realities other than their pursuit or begins to twist and turn that pursuit to fit their twisting and turning minds. Of course ballet is one of those uber competitive fields that requires a stubborn single mindedness. Nina has tunnel vision and it is all in the direction of her art at which she hopes to be...perfect.

Many of us seek various forms of perfection. In 12 step programs we are taught to eschew such notions realizing that happiness lies in constant progress. Nina could have used a support group, but then, when we should have found the time?

So is Nina not sane? What a loaded question and anyway its the wrong one to ask. The Black Swan can have audiences asking all sorts of questions and trying to figure out this that and the other. Trust me, its the wrong approach. Better to just go for the ride. If anything comes to you along the way, why that's a bonus.

I thought, and I'll have legions disagree with this, I know, Portman underplayed the role. It was the right choice too. Nina is not a terribly interesting person with the major exception, of course, of her inner life that is the real soul of the story. What exactly is going on in Nina's mind and why is something we can wrestle with, but it could drive us to the same mental state as she's in.

Nina has creepy relationship with her stage mom (Barbara Hershey) with whom she shares an apartment and a love/hate/sister/loathing/coaching relationship. French actor Vincent Cassel plays the director who she classifies as "brilliant." He may well be but he also introduces a heavy dose of sexuality to his relationships with lead dancers. Winona Ryder plays Beth who has outlived her usefulness as either a dancer or lover.

But the story's real wild card is Lily (Mila Kunis). What is she exactly? A rival? A pal? A lover? An alternate? A doppelganger? She's infinitely more interesting than Nina, at least outwardly. At least we think so. As for her inner life...well, we've got enough to sort out Nina.

Black Swan is a confusing movie if you try to make sense of it. It would require dicing and mincing and dissecting something that flows. Maybe you can analyze samples. I didn't always know whether what we were seeing was real or Nina's imagination or a dream or a vision. I eventually decided not to worry about it.

I keep coming back to this point about not over analyzing the film, or for that matter analyzing it all. With 24 hour news and sports channels, Americans have gotten used to having every bit of minutia parsed for their benefit. Many people of us choose to join in the fun. So we end up looking at every single tree and missing the beauty of the forest. So what I'm saying is that Black Swan is beautiful

It's beautiful for all its visceral imagery. The blood, the toe nails, the scratches, the distorted feet and everything else about it that explores the messy parts of the body warping business that is ballet and the mind warping world of the obsessed.

Have I not adequately addressed what it's about? How about this: the insanity of seeking perfection.
Posted by Richard Hourula at 11:12 PM

I'm sorry, I don't mean to be a Film Nazi, but it's "Black Swan" not "The Black Swan." I recently posted a brief analysis on Black Swan as well, you can find it on my blog. http://cinematicadoration.blogspot.com/

Thanks for point that out, I'll delete the superfluous thes and thanks for the link as well.