Here's to You Mrs. Robinson and Mr. Nichols and Mr. Hoffman and to The Graduate in General 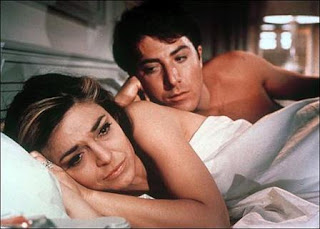 Ben Braddock is every young man who has suddenly stopped along the way to a contented and successful life and asked: "what am I doing? And why?"

There are many individuals blessed with great talent and ambition who sail through school, land a dream job and find the perfect mate. They even sometimes live, "happily ever after." Ho hum. These people often lack vision beyond what they can accomplish towards their careers. They're also generally absent self awareness and so are naturally less aware of others. They disgust me.

Director Mike Nicholas' film, The Graduate (1967) is about a young man (Dustin Hoffman) who has the courage to ask what its all about. Welcome to angst.

Funny thing about stopping to sort out your life, other people don't necessarily appreciate it or even understand what the hell you're doing. The Graduate is a film that captures this quite well.

It shouldn't be altogether surprising that a young man in such a state might fall into a loveless affair with an older woman. Directionless people often end up in strange places. Similarly, meeting a fetching young woman with whom he gets along could cause an over reaction and an irrational, albeit romantic, notion to pursue said female to the ends of the Earth. Or at least to Berkeley. Now consider for a moment that the new found love is the daughter of the older woman. Such a story!

Based on the novel of the same name by Charles Webb with a screenplay by Calder Willingham and Buck Henry, The Graduate's story is not an easy one to tell cinematically. It is rich fodder for the overly melodramatic or cliched romantic comedy. But this is an utterly irresistible film even 43 years after its release when it was downright ground breaking. Nicholas use of a score by Simon and Garfunkel is one of cinema's greatest ever pairings of pop music and film. But what becomes more evident with each viewing is how perfectly paced a film The Graduate is. It positively flies along when the story calls for it and takes its sweet time when that's the order of the day. In that respect it mirrors life. We've all had hours, days weeks and years that fly by leaving only the flimsiest of memories. While conversely experiencing hours, minutes and seconds that go in very slow motion and are never to be forgotten. The Graduate is a film that respects this.

Nicholas was also more clever by half than even the best in his field in creating this classic. Symbolism is everywhere such as Ben behind glass in key moments. The perfectly executed transitional montages were revelatory in 1967 and remain fresh today.

Like the best of European cinema The Graduate is not overly reliant on dialogue. We neither need nor want the "big speech" moments that mar so many movies and give them an unreal quality. Indeed it is the very realness of what The Graduate is communicating in its refreshingly vibrant way that makes it hold up.

There is the final beauty of The Graduate's ending with the wedding kidnapping which steers wildly away from reality until slumping us right back into it as the couple sit in the back of the bus headed who knows where. For this is so often the final verdict of our mad impulses and risks, we're still often left wondering where we're going.

What Hoffman did was perfectly capture that sad, lonely individual rebellion of the man who senses that too much isn't enough and in fact isn't anything at all. He stops his life cold to ask the greatest question a person can ponder: why? This does not make him gallant or pretty, or even particularly smart. Observing Ben's behavior as a rude, sullen clumsy and ungrateful git proves that. But it does make him a seminal cinematic figure in a film that has earned its own importance.

The Graduate asks the big questions, and leaves the audience to answer. How about that?

(For more on The Graduate see the wonderful book, Pictures at A Revolution, Five Movies and the Birth of the New Hollywood by Mark Harris.)
Posted by Richard Hourula at 6:21 PM