Another Round, When the Cure is Worse Than the Disease But the Film is Simply Excellent 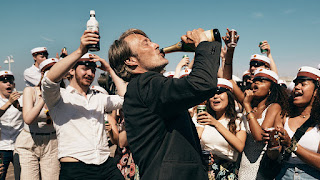 Those first three drinks are the best. Especially the second. The edge is off, you’ve got a warm glow and all seems right in the world. You're convivial and amenable.If you could only stop there everything would be fine. You would be relaxed, happy and sociable. There’d be nothing odd about your behavior and the next day you’d retain memories of the day’s events. Your wallet would be unharmed, there’d be no blinding headache, no roiling stomach. If you could only just stop.

I couldn’t. People with the disease of alcoholism have to keep adding fuel to the fire. They risk creating an inferno. Too much is merely a start. There is no end game, save perhaps unconsciousness.

Alcohol helped me survive my late teens and early twenties when I could otherwise have been wracked with anxiety, plagued by panic, overly shy and frequently depressed. I was an abuse survivor whose mother was a paranoid schizophrenic. Through college and early adulthood, liquor was the cure, it kept me sane and it made me an amiable, popular person. A hit at parties. A success in my chosen career of journalism. Popular with the opposite sex.

Then the cure became worse than the pain — a pain I was only masking. Booze became the be all and end all. I worshipped at its alter. It possessed me. And my possessor was driving me downhill at breakneck speed.

But I was lucky.

I got into recovery.

Not drinking was difficult at first but doable. Living sober, however, was a challenge that, thirty-three years later, I’m still trying to navigate.

Yesterday I watched Another Round, the Danish film that won the Academy Award for Best Foreign Language film at the most recent Oscars. I’ve not seen the other nominees but it’s hard to imagine there’s a better film among them.

Four male teachers working at the same school decide to conduct an experiment in which they maintain an 0.05 blood alcohol level. According to the psychiatrist Finn Skårderud, that level of alcohol in the bloodstream makes individuals more creative and relaxed. All four teachers are in career doldrums, the main character, Martin (Mads Mikklesen), is also experiencing a malaise in his marriage. Teaching can be a grind especially as one gets older and especially with the rest of life going on outside of it that can seem more pressing or compelling. Re-charging one's batteries is essential. So why not try your drug of choice?

I was correct on both counts.

As the film progressed I thought of my own teaching career (began just as I was getting sober) and how it could have benefitted from such a practice. I’ve no doubt that my job performance, my attitude and my happiness would have been improved by having a little bit of liquor in my system at the start of every teaching day.

But at what cost? At what risk? And for how long?

I know from experience that sneaking sips of booze is fraught with peril. I was damn good at it but it still caused stress and one relies on luck and the naïveté of those around you. Of course in my case, as one with a disease, such an experiment would have ended quite badly, most likely with a sudden termination and perhaps divorce.

So this experiment would not have been for me. I was nonetheless intrigued to see how it worked with others.

For our characters it starts well enough. Martin, transforms from the drabbest, least interesting teacher one can imagine, to a dynamic, inspiring professor employing innovative lessons. The others all enjoy initial success as well.

But liquor bottles are found on campus, there are rumors among students that teachers are drinking, a marriage is suffering and the foursome engage in a booze-filled evening in which blood alcohol levels soar. The results of that bacchanalia are predictably bad. One of the foursome has begun a steep downward trajectory that culminates in an embarrassing public spectacle.

How the film resolves its issues are best left for viewers to discover (Another Round is available on Hulu). Suffice to say that the film is an honest examination of the culture of drinking, coping mechanisms, the vagaries of teaching and managing middle age. The mere business of maintaining a professional and personal life that are in harmony is often not as easy as it sounds. Perhaps especially for the thinking person. People often look for an edge, as in business. A way to cheat or game "the system." Maintaining a certain blood alcohol level is one such example. Facing life on life's term is not as easy and it something twelve-step groups emphasize learning how to do.

Another Round became even more poignant to me after I read a little of the film’s back story. The director, Thomas Vinterberg had originally cast his daughter, Ida, in the film and indeed she had helped inspire the movie through stories she told her father of the drinking culture among Danish youth. Four days into production she was killed in a car accident. Somehow Vinterberg managed to complete the film after a mourning period. However, because of the tragedy, he changed the script to make it “more life-affirming.” It was an understandable choice and may have made it a better film — albeit at an unimaginable price.

Another Round boasts a strong cast and as its lead, Mikkelsen is superb, especially in the films highly appropriate, yet somewhat stylized, closing scene.

Playing drunk is not easy in a drama. It is too easy to go broad and present a cartoonish version of an intoxicated person. Drunks often don’t realize how drunk they are, deceive themselves into thinking others can’t tell they are drunk and try to “act sober.” Thus a certain amount of subtlety on the part of the actor is requisite in being a convincing drunk. The four leads in Another Round get this.

I close with a shout-out to my oldest daughter who directed me to this film. I'm eternally grateful that I got sober before she was born. Indeed I was blessed with the gift of sobriety only a few weeks before my wife found out she was pregnant.

Lucky for all of us.

Posted by Richard Hourula at 8:40 AM