A grand day for a walk. We'd had rain yesterday and this morning so the skies were a bright and clean and an azure blue. There were lovely clouds in the distance (mostly in the sky). The green of lawns, flowers, trees and leprechauns were especially vibrant and the temperature was in the upper 50s. Cool but not cold. So I made my walk a long one and once again strolled through my past. This time I visited the neighborhood were I grew up and walked around the grounds of my childhood residence. So much has changed and so much is exactly as it was lo those many (many) years ago. I should perhaps say many decades ago.

Walked around the junior high I attended and where I spent many an hour playing basketball, soccer, baseball and smoking weed. (Not at the same time.) There were a lot of people about but all seemed to be diligent about maintaining social distances, including the many joggers. Oddly I felt I was walking in enemy territory. For many years I taught at a different middle school in Berkeley and coached its soccer team and my alma mater was, of course, a bitter rival. I only spent two years as a student at the school but I spent over 15 coaching against it. Loyalties switch.

It was another day for me to be steeped in nostalgia this time with memories from being everything from six to 12 to 17. I've read that nostalgia can be good for you which should mean I'm quite healthy as I've a tendency to wallow in it.

My walk lasted close to 90 minutes and will have to suffice for today's exercise. I miss the gym and will eventually have to start doing some work outs at home. Dumbbells have been ordered. (No, we haven't sent for stupid people, I refer instead to weights -- for lifting. This witticism relies on a person knowing that dumbbell can be a way to insult a person by suggesting they are dumb....Never mind.)

Prior to my walk and just after teaching my class (online -- blgh!). I watched -- with wife and oldest daughter -- an episode of Murder She Wrote which aired on CBS for 12 years starting in 1984, I believe on Sunday nights. I had idled a few hours watching the show during its heyday but it became regular watching for the better half and some years later she watched re-runs with the aforementioned daughter. They have recently decided to stroll down memory lane and watch it again. I joined them today as the episode (the third of the series) was set and filmed in San Francisco. As it turned out much of it was filmed near the location of the school I taught at for seven and half years.
In this episode Jessica Fletcher (Angela Lansbury) helps an SFPD Homicide detective solve a murder. It is well-known that police departments across the country love nothing more than to have private citizens help them solve cases. In Jessica's case she's even allowed a personal and private interview an accused murder right there in lock up. Ms. Fletcher also somehow knows where the detective lives and pops in on him at will. Of course.

So the show was ridiculous (interesting how wherever Ms. Fletcher went there happened a murder shortly after her arrival) but kind of fun in an I'll-never-do-this-again kind of way. I read about the episode on IMDb right after we watched it and noted in the trivia section that George Clooney had played a waiter. We hadn't noticed him. Oldest daughter decided to play sleuth herself and find his appearance. He was easy enough to have missed on first viewing because he was so damn young and barely recognizable and his role was so small. But we saw a waiter who resembled a young Clooney and when he spoke his line we recognized his voice. It was him all right. Not surprisingly it was one of his first credited appearances. As you may know, he went on to bigger and better.

After the walk I jawed with my two fellow quarantinees (to coin a word) for a bit, then called on my good buddy the Criterion Channel for amusement and edification. I chose to watch a Kelly Reichardt film, Wendy and Lucy (2008). I've seen all her films and this is my favorite as well as perhaps her most popular. I suppose I should write more about Ms. Reichardt and what is so appealing about her work. Maybe after I see her latest film, First Cow which I'd planned to see at a local theater two weeks ago but then this stupid coronavirus got in the way. Damn it.

Meanwhile the quarantine drags on, much to no one's amusement. I did note today that four different people offered me a cheery hello during my wanderings. I've heard that this happening a lot. It's understandable and most welcome that people should exchange pleasantries when deprived of the regular human contact one is generally afforded in normal life. (Remember normal life?)

Maybe some day soon we'll all be able to mingle in and share common spaces in shops, restaurants, ballparks and theaters. Here's hoping.

Posted by Richard Hourula at 8:55 PM

Since I was eight years old I've dreamt of having a novel published. After numerous attempts it was beginning to look like my dream ... 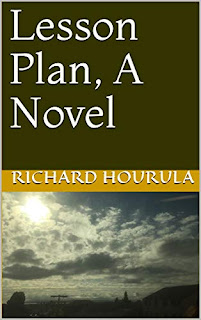