Lincoln Alive Again If Only On Screen 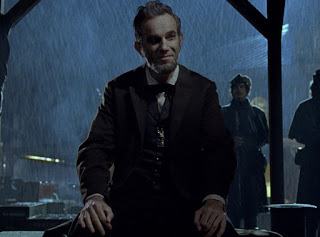 “The interesting thing about grief, I think, is that it is its own size. It is not the size of you. It is its own size. And grief comes to you.  I’ve always liked that phrase He was visited by grief, because that’s really what it is. Grief is its own thing. It’s not like it’s in me and I’m going to deal with it. It’s a thing, and you have to be okay with its presence. If you try to ignore it, it will be like a wolf at your door.” - Stephen Colbert.

Pain. Suffering. Death. Long nights of emptiness. The world is full of horror and unexplainable cruelty. Cursory glances at history and current events will confirm this. It is not only inescapable but easy to dwell on. But there is beauty and magic and miracles and love and dancing and joy. An occasional method to the madness. There are people who persevere and nurture and create. I look at my wife and children and am amazed that life can be so rewarding so fulfilling so beautiful. We should always be mindful of the gifts life bestows. If we are to dwell on anything why not those?

Lincoln is the latest film from Steven Spielberg with Daniel Day-Lewis in the titular role. It is not the greatest film I've ever seen nor even the best of the year thus far but is is a revelation. As a life long student of U.S. History -- including the life and times of Abraham Lincoln our 16th president -- I feel safe in singing the film's praises as masterful historical fiction.

Wisely, Spielberg did not try to make a sweeping historical epic. He confined the film largely to Lincoln's efforts to gain passage of the 13th amendment to the U.S. Constitution which abolished slavery.

At their best, historical dramas not only tell us a story but recreate an era and its people. Lincoln the film does this. Sets costumes and pitch perfect casting followed by similarly precise performances seem to transport the viewer to Washington D.C. in early 1865. Muddy streets. The White House. The House of Representatives. Taverns. Houses. You are there and best of all in your company is the thoroughly engaging personage of Abraham Lincoln. My goodness Day-Lewis gets it right fitting as his performance does to the collective picture of Lincoln our culture has created. That wisdom. That wit. That folksy story telling charm. And that political cunning that beguiled so many who were so ready to dismiss the angular hick from Illinois. It is the best cinematic portrayal of a historical figure since Sean Penn as Harvey Milk.

This was a remarkable man. Especially considering that he was largely self educated --- what a teacher! You will hear from many who will find fault in his presidency and his politics. Gasp! He was not perfect. There are those in academia who love to puncture the public's mythology about their heroes. It's an odd and easy sort of game. Largely purposeless except as a twisted self aggrandizement. The more famous the more beloved the more respected their target the greater the payment to their ego to take him down a notch. Lincoln had contemporary detractors aplenty -- like the white residents of the Southern states -- and does today. I heard one proclaim that Lincoln did not free the slaves that they left of their own accord. It is true that he did not march down south and open the gates and escort each slave to freedom. But from his perch as president he played a significant role in the ending of the peculiar institution. His insistence on the passing of the 13th amendment is one example.

Lincoln the film reveals the legend as man. Humble. Affable. And a shrewd politician. He mixed it up with the best of them and won more often than not. Lincoln the film shines a light on Lincoln the person largely by fully revealing some of the individuals and archetypes who surrounded him. See Tommy Lee Jones as Thaddeus Stephens the abolitionist senator. David Straitharn as William Seward the secretary of state. Sally Field as the pixilated Mary Todd Lincoln. See a cast ranging from James Spader to Bruce McGill from Hal Holbrook to Joseph Gordon-Leavitt from Tim Blake Nelson to Michael Stuhlbarg.

There is a bit of the sports movie story arc to Lincoln where a last minute victory is pulled out against all odds in dramatic fashion. But this is a different sort of film in that the protagonist is subsequently killed. Oh yes and this just may be the definitive American historical drama.
Posted by Richard Hourula at 8:42 PM