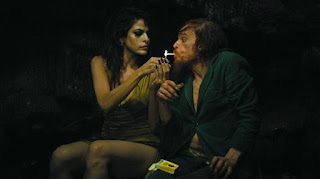 "She knew, because she had held him, that he suffered DT’s. Behind the initials was a metaphor, a delirium tremens, a trembling unfurrowing of the mind’s plowshare. The saint whose water can light lamps, the clairvoyant whose lapse in recall is the breath of God, the true paranoid for whom all is organized in spheres joyful or threatening about the central pulse of himself, the dreamer whose puns probe ancient fetid shafts and tunnels of truth all act in the same special relevance to the word, or whatever it is the word is there, buffering, to protect us from. The act of metaphor then was a thrust at truth and a lie, depending where you were: inside, safe, or outside, lost.” - From 'The Crying of Lot 49' by Thomas Pynchon.

Dare me with delights. Stagger me with your confusion in great profusion. Let me unearth the sorted meanings from moments unhidden. And bid me a loving memory of your ghostly chants. So cries the rain on calm Winter nights of pure black.

I saw Holy Motors. An enigmatic film from France that jealously guards its meaning(s) but invites us to ponder them. Piquant. Ribald. And enthusiastic about story telling.

Most films are up front about who is who and what is what and where is where and when is when and even  -- dare I say -- why and how. Mysteries are solved for us and we are left to turn off our higher thinking skills and eat at the trough. These movies are eaten like the popcorn they are served with and provide a like amount of nutrition. Harumph!

In the world of Holy Motors there are great stretch limousines traveling around Paris and perhaps for all we know other cities. Inside are individuals with "appointments." We follow one such mystery person (Denis Lavant) and his faithful driver on a day when he has nine appointments. Ahh but these assignations. So strange. Once a man picking up his teenaged daughter from a party. Once a man set on killing a lookalike. Once a man dying in a hotel room with a loving niece by his side. Once not a man at all but an old beggar woman. And once...well it's hard to say really. A flower eating, money eating, hair eating freak show of lunatic who carries off a model (Eva Mendes). Is she part of the show? Is it a show? And who is that man who appears in his limo between assignments? I'll not reveal their conversation but in it there must be clues. Right? Or how about when he meets with a fellow...uh, traveler? (Kylie Minogue). Yes that is a strange interlude complete as it is with a musical number. (There's an earlier jaunty musical interruption that serves as an entr'acte.)

So that question comes up again. "Did you like the movie?"and its frequent partner: "What was it about?" Oh you!

Images. Not just the right set piece but the peculiarity the mystery the wonder of what is going on within it. The unconventional. I mean really. How often can you see the usual?

My mind is dwelling in the land of Holy Motors where limos meet and drivers put on masks and Frenchmen live with apes. And fingers are bitten off and bankers shot in public and colds caught in the process. And people survived knifings to the throat and did I mention talking cars? Oh but that opening sequence....Zowie!

So thank you for the thought. Thank you for playing with me and daring me to think and trusting me go along for the ride and zigging with your zagging. I'm not doing anything right now because I'm so busy. Therefore this is good time to ask me about who arranges and for what purpose and how is all this possible and what is the symbolism and are these angels and is life really -- like the bard said -- a stage? We the players.

Holy Motors was written and directed by  Leos Carax and I think he's nuts and I like that about him.
Posted by Richard Hourula at 8:46 PM