Odds and Ends Again? Already? But Ultimately With a Focus on Two Terrific Films: Le Havre and Ivan's Childhood 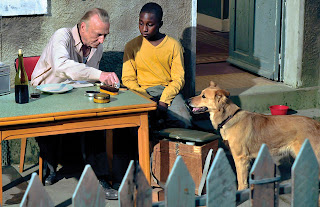 I overheard a conversation in which one person described being at a party where turducken was served (that's chicken and duck cooked within a turkey). She said it was "sort of a f*ck you to vegetarians." Yeah, I can see that. We've got it coming for sure. We walk around not eating meat all the time. The nerve.

I've come across people who do not own TVs. Bully for them. If you can get by watching movies on your computer and don't give a fig about sports it's doable. But what I find interesting is how many of them watch TV shows, entire seasons of them, on their computers either via Hulu, Netflix instant, the show websites or rented DVDs. So let me get this straight, you're proud of not having a TV but you watch the shows that originate by and for that media.

Hey did you just google me and come across my blog and decide to have a read? There's no mystery about me. Some people you google and there's virtually nothing. But idiots like me with a blog in which we pour out our heart and soul (and the minutia of our day-to-day existence) we're easy to catch up on. Hey, why not shoot me an email? What, we went to high school together? College? We did a stretch in the slammer at the same time? Maybe were in the same mental institution. Maybe we were co-workers. Or your a former students or teacher or lover or hater or rival or doppelganger or dentist or deviant or dog catcher or neighbor or teller. 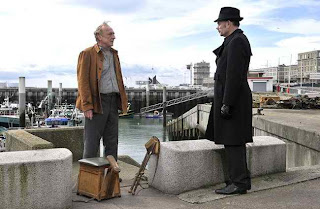 I watched two terrific movies this past weekend: Ivan's Childhood (1962) a Russian film from director Andrei Tarkovsky and Finnish director Aki Kaurasmaki's latest, Le Havre. Ivan's Childhood is like a rich hearty meal that leaves you sated but somehow wanting more. Le Havre is simpler fare but no less appetizing or satisfying. There is a sensibility to Kaurasmaki's films that I can relate to as a fellow Finn. Yet he has a broad appeal. Kaurasmaki is an internationally recognized director and in fact this latest work is set and spoken in French. There is a decided lack of flamboyance in both his story telling and his characters. Actually that is understating it. In a typical Kaurasmaki film the characters are as emotional as oil paintings, which is remarkable in light of the trying  and sometimes tragic circumstances that constantly befall them. The trials also lead to humor that is of the deadest deadpan you can conjure. To turn a phrase: you chuckle, you frown, it becomes a part of you. It also has the feeling of reality. Not real. Just the feeling of it. Some things that are too real are like rifling through the trash. Kuarasmaki's films are like the best yard sales ever. Le Havre is his most hopeful film. For him it is a veritable romp through the tulips. The first of a projected Harbor Trilogy, it concerns a wise and earnest elderly shoe shiner married to a devoted and stoic wife. He stumbles upon an African illegal trying to make it to London. Our hero aids and abets the refugee with the help of other locals (and his dog). Meanwhile his wife enters the hospital with a seemingly fatal illness. Yes, Le Havre deals with issues of immigration but it is more than that by half. For at the real heart of the film is the heart of people desperate to do their bit in the service of good. They are not heroes, just heroic. 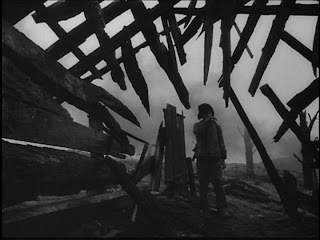 Ivan's Childhood is one of those coming of age stories. You know, the kind where you come of age during WWII and your lost innocence transforms into blood lust born of a desire to seek revenge to those who....Anyway. This was my introduction to Tarkovsky and suffice to say I'm hooked. With IC he tells a non linear story wrapped in dreams and not so much the fog of war as the mists. For such a brutal, sad tale it is beautifully told. The cinematography, in glorious black and white, is sumptuous. This is a film in which Bergman meets Antonioni and Kurosawa drops by. There is nothing beautiful about war, but there can be and is in this kind of exquisite film.
Posted by Richard Hourula at 7:55 PM