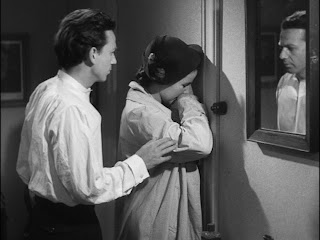 "Sensitive. That killed me. That guy Morrow was about as sensitive as a goddamn toilet seat." - From Catcher in the Rye by J.D. Salinger.


"The story was writing itself and I was having a hard time keeping up with it." From A Moveable Feast by Ernest Hemingway.

On the bus ride home from the gym there was a young couple speaking an East European language. They were in love and didn't care who knew it. The notion of a time and place for everything had no meaning to them. Ditto the woman towards the back of the bus who was chattering away on her cell phone. Loudly. I couldn't tell whether it was more or less annoying that she wasn't speaking English (Arabic, I think) and decided it was a push. There was an obese woman on the bus taking up two seats. She was fanning herself vigorously despite the fact that it was chilly outside. There were a lot of college students on the bus with suitcases. They were returning from four days back home. Finals are coming up for them.

It had been to crowded for me at the gym. But I got in my workout so who's to complain? On the treadmill next to me was a very, tall slender blonde woman who must have been about 20 years old. She had strong, gorgeous legs and a tight, fairly small ass. I pegged her for a volleyball player. Later I passed by her and saw that she was wearing a tee shirt that said UC Davis Volleyball. Called it! My oldest was a volleyball player, so I spent a lot of time at tournaments and know my female volleyball players.

At home I worked. I miss scratching things out with a pen on a legal pad. Now it's straight to the computer. There's a kinestetic aspect to it that's missing. Get a little bit of that feeling if I'm typing furiously.

Thought some more about the movie I watched the previous night. I'd started to write about it. Guess I'd better finish. Here it is:

Life is full of pain and suffering and misery and for all of us it ends in death. This is a rule absent of any exceptions. It is from this understanding that art springs.

Artists, whether writers, filmmakers or painters, try vainly to make sense of the human experience. Those efforts to create sense often create beauty. Or understanding is never complete -- progress not perfection -- but it brings comfort to feel closer to truth.

Ingmar Bergman's To Joy (1950) is about the death of a spouse. We meet a man at the beginning of the film who is a violinist in a Swedish orchestra, evidently one of some renown. He is summoned home where he is informed of the tragic death of his wife in an accident that has also badly injured one of his twin children.

Most of the rest of the film is a flashback telling the story of the man and wife and how they met and married and loved and hated and separated and re-united and loved some more. It is a rather thick slice of a life. A rich one that most anyone can identify with. Chock full of all that life has to offer. The pain, the joy, the growth, the richness of experiences deeply felt.

Then we are back to the grieving man and the utter desolation of a premature death. But the story does not end as a melodramatic tragedy. I'd rather encourage you to see the film for yourself than reveal the ending. Suffice to say it offers, if not exactly hope, a sense of the spirit that life must go on and despite the worst happening can be appreciated, must be appreciated. Our time on Earth is to be savored, however and whenever and to as great a degree as possible.

Beethoven's Ode to Joy is a way to express and to understand this.

Bergman's To Joy is another.
Posted by Richard Hourula at 5:07 PM