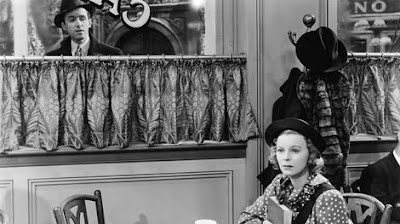 Here's the challenge: try to explain to others something you don't understand yourself. You like something, you like it a lot, of that there is no doubt. But explaining exactly why is difficult. You find it hard to discuss except in the most general terms. Explaining why you like it may help you gain insight. Insight into what you're not exactly sure.

This is what I face as I try to write about The Shop Around the Corner (1940). A film directed by Ernest Lubistch (he of the famous "touch") and starring James Stewart and Margaret Sullavan.

It is the story of two co-workers, Alfred and Klara (Stewart and Sullavan), who quarrel constantly. They are young, single and don't realize that they are in love. They further are unaware that the other is their anonymous pen pal with whom they are carrying on a torrid, albeit strictly postal, romance. The story has been redone with limited success numerous times including two notable film versions, The Good Old Summertime and You've Got Mail. The original remains unmatched.

The primary subplot concerns the shop owner's (Frank Morgan) suspicions that Stewart is carrying on an affair with his wife. He's right about the affair but has the wrong culprit, its another of his employees, the sleazy Vadas.

Of all the many outstanding films Lubitsch directed, this was his personal favorite. Yet it is not as funny as To Be or Not to Be, nor as audacious as a Design for Living nor as sly as Trouble in Paradise. The humor here is what is so often called "gentle." Indeed the film itself is gentle. The characters, the music, the settings are soft and warm. Even the evil Vadas is is tolerable in small doses being more of a sycophant and a liar than any sort of menace.

So The Shop Around the Corner is a comfortable film. It does not challenge audiences with hard truths. But it is neither sentimental nor bland. Like many great films it is layered and reveals more and more of itself upon repeat viewings.

It is a film that stays within itself, never straying far from the shop physically, or its characters, emotionally. There is nothing broad about it, with scenes flowing naturally out of the impulses and desires of the varied shop clerks. The supporting cast is superior, especially Felix Bressart as Pirovitch. Watch him wax realistically about maintaining a family on a small income. Watch him dash in the other direction when he hears the boss (Morgan) ask for opinions. Watch him finally, bravely, stand up to the boss. And Morgan couldn't be better than he is as the cuckold husband and kindly employer.

Like most outstanding films this is about relationships and how the constantly shifting sands that can serve as their foundations. Clearly the Klara-Alfred relationship takes center stage and its happy conclusion is one of the finest film romances of all time. But other relationships are integral to the Shop, such as that between Alfred and his employer. It is sweet, turns sour and then becomes something different altogether. Let's say the Rock of Gibraltar.

I think I'm beginning to understand the challenge in describing my appreciation of this film. It is a wonderfully underwhelming movie. It is a sofa, blanket and cup of tea on a rainy day. It just feels good. It is a pleasure to know its characters. In fact, you might like to visit their shop, browse around, be a regular or maybe even get hired on with them. You care about them.

Imagine the risk of setting out to make such a film. Easier to make a straight comedy, a musical or a melodrama. But you get Lubitsch at the top of his game and a wonderful cast and it can be done. It was done.

Posted by Richard Hourula at 10:47 AM

Great post! I love this movie -- and for what it's worth, I think you did a great job explaining something that you (claim to) not understand ;-)

Thanks. Hey, you never commented on your pic in the preceding post!

Riku, I also love this movie. And as one who has struggled with the challenge of writing about it, I must tell you what a superb job you did in explaining its elusive appeal. The post just kept getting better and better as it went along, and the last part was just a knockout. I've thought a lot about this movie myself, and I certainly gained insights reading your thoughts about it.

R.D. Thanks. I read over my post after publishing it and had conflicting feelings. On the one hand I thought it stunk and on the other hand thought it was pretty good. Based on your comments and Kate's before it I am now convinced it didn't stink.
Seasons Greetings.
Richard

I think this is the best description I've seen of this movie. You brought up a lot of things that I felt about the movie, but had never fully realized. It isn't as simple a movie as it seems.

I adore this movie as well and this post was a pitch perfect explanation of it. He managed to make seemingly bland material a beautiful understatement.