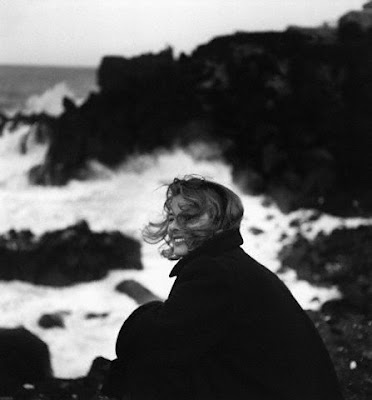 Saying that this is Ingrid Bergman at her most beautiful is like saying this is Sinatra singing his best song, or Michael Jordan playing his best game of hoops. But say it I will: Folks, Ingrid was never, ever more beautiful than when she appeared in Stromboli (1950).
One supposes that much credit goes to the film's director, Roberto Rossellini. Off camera, director and star had just began an illicit affair that would eventually lead to pregnancy, scandal, divorce and marriage. So it shouldn't be surprising that his camera treated her rapturously. It can be further speculated that Ingrid was in the head over heels phase of love that can make a woman positively radiate.
But you know what else? She played a real stinker. You thought her character, Alicia, in Notorious (1946) was shady, get a load of Karin in this picture. She is one selfish, pouty, manipulative lady. The way she treats her poor fisherman husband, Antonio (Mario Vitale) is a caution. He's not a bad bloke either. The honest and ernest hard working kind of guy that too often gets stepped on.
We meet Karin at the end of World War II in a displaced persons camp. Antonio is an Italian soldier who courts her through the barb wire that surrounds the camp. She's knocked around lot in large part because of the war and she lost a husband, totally because of the war. Karin has had some tough breaks and gets another when her application to emigrate to Argentina is denied. It's then she latches on to Antonio who marries Karin and takes her to his hometown, the island of Stromboli.
The sparseness of the island, the lack of amenities and the close proximity of an active volcano gives the bride second, third and fourth thoughts about her new situation. When the locals shun her, bad gets worse.
One of the great things about films like Stromboli is you can go interpret in two ways: 1) what was Rossellini trying to say? or 2) what do I take from this film? Indeed it is a characteristic of many films from the post war neo realism school. At the risk of a spoiler I must add that the ambiguity of the ending (though there was at one time a Hollywood ending tacked on to please low brows) certainly adds to any discussion on Stromboli's underlying message.
Rossellini reportedly wrote the film as he filmed it and in lieu of a script used his own hand written notes. Clearly characters and setting were of equal importance to anything so mundane as a screenplay. The director also utilized "real people" (as opposed to the fake plastic ones in most movies) in the form of island residents. This included amazing fishing scenes (real fish, no actors). There was audible squeamishness among the audience when I saw Stromboli recently at the Pacific Film Archives in Berkeley ( I thought some people were either going to puke or call PETA during the ferret/rabbit scene). The scenes of the volcano acting up were also amazing and doubtless done with nary a special effect. Well you can't have neo realism without such strong doses of realty. It all added to the feel of a true story. Stromboli felt like something of a documentary at times, so much so that the never lovelier Ms. Bergman couldn't totally doll it up.
Actually the Ingrid/villagers contrast was not a dichotomy. She had to be in contrast to everything and especially everyone else in the film. This was the brilliance or luck of Rossellini, to have a film goddess who was a brilliant actress to provide such a startling but believable contrast to her environs and thus make the story he was telling all the more compelling.
We watch Karin's struggles with her environment, both the physical and human. It's really a struggle within herself. Whatever is around us just is and there's little if anything that we can do about it. What's key is how we deal with and react to our surroundings. We, like Karin, also confront the question: do I stay or do I go? Either way we answer, as Karin finds out, leads to another set of ponderables.
With Stromboli you might say that some audiences would come for Ingrid but stay for the story. Not a bad deal.
(Some might squawk at my including this film in my series on Italian cinema inasmuch as it was largely in English and backed by an American studio. But this was an Italian film all the way, not just the director and all but one of the performers, but the crew and most importantly, the style.)
Posted by Richard Hourula at 9:38 PM